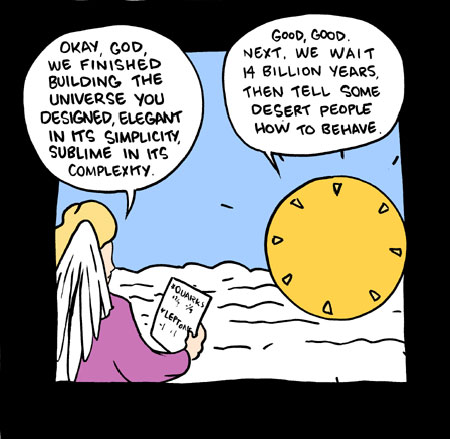 Where does one start when one undertakes the phenomenal task of philosophising about such fundamental questions as the origins of life and the nature of time itself?

Should one commence at the beginning of time? The apocalyptic or dystopian end of life as we know it? Or does one appreciate the insignificance of human existence on the cosmic timescale and refrain from making any assumptions whatsoever? Over the course of the last few months, I have been prodded, stimulated, and occasionally distracted from the ‘real’ problems of the world by some of my readings on these subjects. I concluded, perhaps presumptuously, that it would be a learning experience, if nothing else, to give some semblance of an order to what have been up till now just wispy strings of thoughts. That is all there is to this.

Explaining, says Richard Dawkins, is a difficult art. You can explain so that the reader understands your words; and you can explain so that he feels the essence of what is being conveyed. This series of articles, though, aims for no such lofty ideal since its subject matter is, quite literally, too vast. What I do wish to attempt, however, is to at least hint at the picture and impress upon you the sublimity of it. This endeavour, I should warn you, just skims off the tip of the iceberg. Maybe not even that! But, hopefully, it will sufficiently pique your curiosity and prompt you to pursue one or several of the avenues that might open up.

There are more things in heaven and earth, Horatio,
Than are dreamt of in your philosophy.
—Hamlet, Act I, Scene 5 Like God, people have the tendency to take time for granted. After all, it has existed as far back as anyone can tell. Not surprisingly, it is rather difficult to accept the fact that prior to a certain moment in time, there was nothing. No atoms. No laws of physics. Not even time itself. Modern cosmology stipulates that this momentous event—The Big Bang—happened about 14 billion years ago and most physicists now take this to be a given.

At this time, all the matter in the universe was on top itself, forming a ‘singularity’ of infinite density. More importantly, what this means is that the state of the universe after the Big Bang would not depend on anything that happened before since all the deterministic laws would have broken down during the Big Bang. Events before the Big Bang are not defined because there is no way to establish what could have happened then. This kind of beginning to the universe, and consequently time, has the downside of needing an external agent to kickstart it. (No wonder that despite tremendous strides in scientific achievement, we still have creationist hypotheses not only being believed in but also fostering controversy and superstition.) Since this wasn’t such a scientifically sound premise, several theories were proposed in the past to get around the conclusion that universe was once not reduced to a singularity. I have taken the liberty of discussing one of them here.

The Steady State Theory (1948) by Fred Hoyle, Thomas Gold, and Hermann Bondi proposed that matter is constantly being created so that the density of the universe remains constant over time. The theory asserts that the universe is constantly expanding but it does not change its appearance over space and time. This principle—also known as the Perfect Cosmological Principle—essentially means that the universe has always been there, with no definite beginning or end.

However, the discovery of microwave background radiation in 1965 proved to be a death blow for the Steady State Theory as there was no way it could be satisfactorily explained by the tenets of the hypothesis. The steady state model was therefore discredited by the scientific community and it is now agreed that the Big Bang Theory is the most accurate explanation for the origin of the universe; one that is supported by scientific evidence and experimental observations. (Aside: Life, it seems, is not without a sense of irony. It was Fred Hoyle who first came up with the term Big Bang during a radio broadcast in 1949 and what came to be known as the Big Bang Theory originated from ideas originally proposed by Monsignor Georges Lemaître, a Belgian priest of the Roman Catholic Church.)

The Big Bang Theory relies on General Relativity to extrapolate the expansion of the universe backwards in time, yielding a singularity of infinite mass and density at a finite time in the past. However, beyond this point, general relativity (and all other physical laws) breaks down. Big Bang Theory can not and does not provide an explanation for such a state of the universe. It only seeks to describe the events that happened after it. Indeed, there is a limit up till which the extrapolation described above is even theoretically possible. This limit – known as the Planck Epoch – is the shortest possible unit of time and represents the period during which the fundamental forces of nature were possibly unified. A new quantum theory of gravitation – scientific models that unify quantum mechanics with general relativity – is needed to break this theoretical barrier and understanding this earliest era in the history of the universe remains one of the greatest unsolved problems in physics.

So who wound up the clock work for the first time? What caused the Big Bang? Unfortunately, although we have a whole gamut of theories, we still do not know. But don’t let that bog you down. There is enough mystery in the universe to keep our faculties occupied and our senses amazed. In the next installment in this series, I will try to shed some light on one of these enigmas: the origin of life on earth. Hopefully, you will stay tuned!

‘Through Time‘ is a series of articles that aims to chart our journey through time, from the early beginnings of the universe and origin of life to what promises the future might hold for the continued survival of the human race.

Beyond Happily Ever After