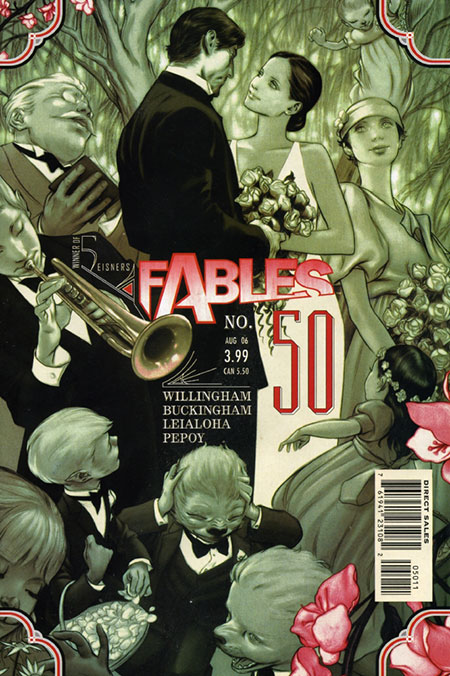 Yes, we have all read them while growing up. Believed in the ‘happily ever after’s and, of course, wanted our fair share of adventures. While some walked past the realm with age, some, like me, decidedly stayed fixated with the fables and folklore and went on, right ahead, to create a world borrowed and stolen, full of names that return us to innocence. And the world
kept expanding. Much like Bill Willingham’s Fables. A world of magic, marvels, and miracles; a world borrowed, stolen, yet far moved from the innocence of the happily-ever-afters. Kicked out of their comfortably convenient hometown by Adversary, characters from fairy tales find themselves a part of a covert zone called Fabletown and the ones who stand out in the crowd, horned and furry, are kept safely tucked away in the Farm, far from the prying eyes of New York City.

From drawing fantasy images in ink for Dungeons and Dragons, Willingham has come a long, long way. With Fables, he manages to create a world you cannot help but believe. Much as I love the fairy tales and much as I like Willingham’s version of them, I would not call the artwork breathtakingly beautiful, especially when compared to his previous works of art. But when you come across exquisite, full-page paintings of these characters, you want to hold one of these books in your hand and not scroll through a comic book reader anymore. The second thing that makes the artwork oh-so-appealing is the presence of colours. In all honesty, never did I expect such a riot of bright and cheerful colours with all the gore, sexiness, and violence flowing off the pages!

Starting off with implications of murder, it is a delightful treat to see characters growing up to embrace the world of reality as their own. With the ball of the Annual Remembrance Day coming up, the murderer must be found and he must be found fast. With Rose Red’s apartment bloody and trashed, Snow White teams up with the Big Bad Wolf, Bigby (who is a miraculously reformed character), hoping to find her sister’s killer. And thus, starts a series of adventures and the teeniest undercurrent of a romance which would have been rather memorable had it developed beyond what can also be passed off as my hyperactive mush-loving imagination.

Quick-paced, it takes one rather little time to get through the books, and when one Fable is over, you can do nothing but start reading the next one.

Winding Up the Clock