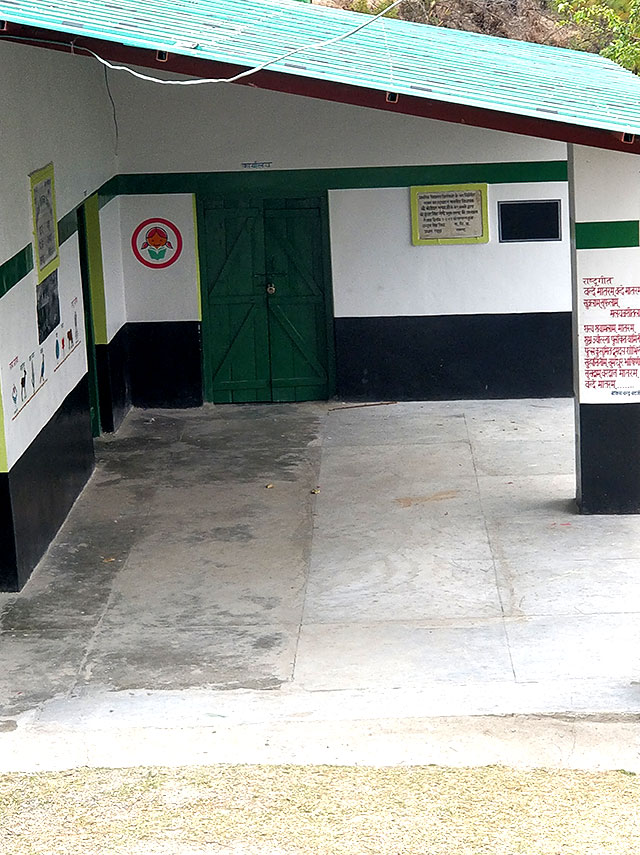 Tara walked towards the school with urgent footsteps. The air was warm, the sun was bright, and Tara wore a synthetic saree, so the sweat came freely. The occasional breeze made the walk more bearable. Four children voiced their high pitched greeting as she walked by.

“You’re back from school?”

“Yes.” A tiny girl with tight pigtails looked up at her. Tara patted her head and continued walking down the hill to the school. Three men had already arrived, and were sitting on plastic chairs. Tara breathed out in relief, because the other woman hadn’t arrived yet.

When the other woman finally arrived, Tara and the men in chairs stood up to greet her. This other woman wore a cotton saree, starched and stiff, like her unsmiling lips, coloured a dark maroon. Tara and the cotton-saree-woman sat behind a desk, their importance indicated by the two unopened plastic water bottles that were placed in front of them. A man in a blue shirt sat next to the woman in the cotton saree. Welcome to the Gram Sabha meeting. Photograph by Pragya Bhagat.

“Well… I’m thinking of building a road into the village, a proper road.”

“There are schemes you can do it under. Through M.G.N.R.E.G.A. There are many agricultural schemes. The mantri called the other day, he was talking about the P.M.G.S.Y. scheme.”

“Yes,” Tara nodded (because one agreed with people like the blue-shirt-man), “that scheme would be the best. The P.M.G.S.Y.”

Diwan and Tara’s husband arrived and sat on the frayed rug. Gopal arrived with a bouquet of plastic flowers, which he handed to the woman in the cotton saree. He wobbled the way he usually did when sober. The cotton-saree-woman turned to Tara.

“Yes, always. Actually, there’s a wedding in the village. But people will come. I told them to come at one in the afternoon.”

As if on cue, three more men arrived, and one of them wore sunglasses. It was the Sarpanch. The men accompanying him, Tara recognised, were loiterers from the market, the ones who played carrom and smoked during the day and drank and beat their wives at night.

An elderly woman shuffled into the school and sat in front of the rug. She had a total of two teeth and wore a bright blue saree.

The blue-shirt-man spoke. His voice was quiet, calm, and everyone stopped their whispering, even the wind. “Call your neighbours, only if a good number of people come can we spread our message effectively.” Three more women entered the ground outside the school. The blue-shirt-man stood up.

“Respected Pramukhji,” he nodded to the cotton-saree-woman and she nodded back, “Pradhan Madam,” Tara nodded, he addressed those seated on the chairs, then turned to those on the rug, “and my fellow brothers and sisters. Welcome to the Gram Sabha meeting. There should be awareness of this meeting, but it seems the attendance is low. I request you to take advantage of such opportunities. We have come only for you.”

The two-toothed woman mumbled. “Who is this man? Is he from the government?” Her voice was sticky.

“If the people don’t participate,” the blue-shirt-man continued, “then why are we here? I am grateful to Pramukhji for coming and gracing us with her time.” The Sarpanch clapped loudly and a few others followed with weak applause.

“The purpose,” the blue-shirt-man said, “is not that I come, speak, and you all go home and eat.” It was meant as a joke, and he waited for laughter, but there was none, so he cleared his throat. “We meet twice a year, so we should make the most of these open forums. I now request our respected guests to say a few words.” For the next half hour, the men in the chairs spoke, and a dozen more women trickled onto the rug. The cotton-saree-woman stood up and spoke in dialect.

“Tell us your problems. What challenges are you facing?”

“Are you getting pension?”

“Do you have your Aadhaar card?”

“My life is hell! We don’t have money, we don’t have water, our crops are dying. Do you know what hell feels like?”

“Your Aadhaar card needs to be linked to your pension. If your Aadhaar card isn’t made, we request you to go to the center near Bhimtal. If any of you face problems there, you can tell us, and we’ll forward your problems in our meetings.”

The two-toothed woman stood up. She was thin, her bright blue saree hung on her bones. “You want to know our problems? There’s no water.” A cacophony of voices swelled all at once. The other women too spoke of water, how there was less this year than last year. The Sarpanch added his voice to the overlapping complaints.

“What are you saying?” It was the two-toothed woman. “We don’t have water!”

Tara wished she could speak more at these meetings, but there were important people here, the men on the chairs, the blue-shirt-man, the cotton-saree-woman. She had to make a good impression. Say less, but say it well.

“Water is everyone’s responsibility,” Tara said. “If there’s a spring in your house, you should be taking care of it.” She stood up and looked at the Sarpanch. “But more importantly, motors shouldn’t be hooked up to springs. If the villagers aren’t getting enough water, then why should outsiders get it?”

The Sarpanch took off his sunglasses. “The outsiders can help us if we help them.”

“You placed a motor on a local spring. You should have asked my permission first.”

“I would have told you eventually. I didn’t think it was urgent.”

“You threatened me on the phone.”

The Sarpanch laughed nervously. “We were just talking, Pradhan Madam. There is no need for everyone to know about our private disagreements.”

Say less, but say it well. “The water is not yours. It belongs to the village.”

“Children are coming to our village with canisters. They fill these canisters with our water because their own villages are dry. Should we deny them water too?” A chorus of women began speaking over each other, but no one was listening.

The blue-shirt-man spoke again, slightly louder than a whisper, and the other voices dissolved. He turned to the Sarpanch. “First of all, planting a motor to a spring is illegal.” The Sarpanch put his sunglasses back on. “Second of all, if you are facing water shortages, you can use the M.G.N.R.E.G.A. to combat this problem. The water you wash clothes in, the water you bathe with, it runs downhill, then it enters the ground. All this water can be collected. You can do rainwater harvesting, there’s provisions in M.G.N.R.E.G.A. for this.”

The two-toothed woman spoke. “What will we do with rain tanks? It hasn’t even rained properly.” The other women echoed their assent. A heightening murmur threatened to derail the conversation.

“Listen. At least listen to me. If a child is sick, we don’t leave him to die, we take care of him. Nature is also like that. It can be taken care of. You need to build a water tank.”

“No, you listen.” The two-toothed woman walked up to the table with the plastic water bottles, and she began to scream.

“My son has died! Do you know what that feels like? No, you don’t. My daughter-in-law doesn’t get any pension. My life is hell! We don’t have money, we don’t have water, our crops are dying. Do you know what hell feels like? No, you don’t.” She cried and beat her chest violently. She slapped a file on the table. The cotton-saree-woman opened the file and leafed through it. Everyone stopped their whispers.

“We will help you.” The cotton-saree-woman stood up. “Your Pradhan will help you. Won’t you, Tara?” Tara nodded. “I have to go now, but thank you for coming to this meeting. You can continue.” The cotton-saree-woman stood up and the blue-shirt-man followed her out of the school. A line of women formed in front of Tara, each carrying a bill, a file, a form that claimed importance, but had lain untouched since the last Gram Sabha meeting. Diwan and Gopal brought everyone tea in tiny paper cups. The two-toothed woman sat on the corner of the rug, her face wet with sorrow. In the stack of documents that piled in front of Tara, the old woman’s file was soon forgotten.