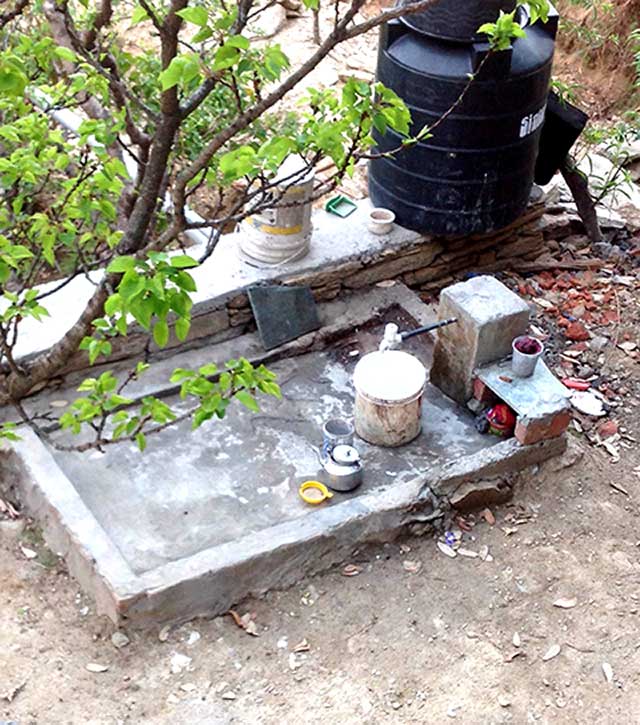 “The third kind,” Tara said, “don’t do anything at all. They just complain.”

“Which category does the Sarpanch fall into?”

“The second. It’s sick, how selfish he is. I don’t know why he ran for elections if he didn’t want to serve the people.”

“Isn’t it obvious? He wants power. He wants to serve himself.”

Tara had just discovered an ugly truth. The Sarpanch had authorised the connection of a motor to one of the village springs. The water was being siphoned off to a resort in an uphill village.

“This is the height of exploitation,” Tara said. “Your own villagers don’t have enough water to irrigate their fields, and you’re giving it away to a hotel? They don’t even belong here, they’re outsiders. Disgusting. And he doesn’t even have the authority. He was supposed to ask me first.” “Your own villagers don’t have enough water to irrigate their fields.” Photograph by Pragya Bhagat.

“What are you going to do?”

“Talk to him, of course. This is outrageous.”

Tara looked for her phone. She found it with Shyama who was sitting by the water tank.

“I had to call Shruti for notes.”

“Sure you did,” Tara said, “the Board Exam is five days away and here you are, stuck on the phone.”

“Fine. Be this way. You don’t listen to me anyways. We will see if notes from Shruti help you pass or fail.”

“Pradhan Madam. What a pleasant surprise. All set for the Gram Sabha next week?”

“Sarpanchji, what’s this I hear about a motor on a spring?”

“I don’t want to hear your excuses. Why didn’t you get my permission?”

“Like I said, I was just about to call you for that. It’s been a busy few weeks with the weather being so warm. These forest fires appear out of nowhere. You know how it is.”

“Yes, I know how it is. I know you need my signature to authorise something like that. I know I was not told about the motor, and I know why. What you’re doing is illegal.”

Tara heard the click of a lighter on the other side of the line. She waited for the Sarpanch to reply. She recalled his ugly habit; the Sarpanch smoked when he was nervous.

“Do you have anything to say for yourself?”

“Yes, I do.” The line went quiet. Tara imagined he was taking another puff.

“Who do you think you are?”

“Who do you think you are? No one tells me what to do. Are you upset because I hooked up the motor, or because I didn’t include you in the deal?”

“Don’t play games. If you mess with me you’ll be sorry.”

“Are you threatening me?”

“Are you upset because I hooked up the motor, or because I didn’t include you in the deal?”

“Take it how you will. I know you’re going to enter politics someday. Do you take me for a fool? If you mess with me, let’s just say you’re future isn’t going to pan out the way you want.”

Tara was sitting on the verandah that evening. Her husband joined her.

“What are you thinking about?” he said.

“People. Why they believe what they do. Does the Sarpanch actually think he’s right? That preventing the villagers from getting water is right?”

“The hotel is making sure his pockets are full of cash. Their money is doing his thinking for him.”

“What if he doesn’t admit to wrongdoing at the Gram Sabha?”

“Who doesn’t admit to what?” Gopal had just walked in. Diwan accompanied him.

“Bhabhiji is on a mission,” Diwan said, “to purge the village of corruption. Who’s the target now?”

“Stop your joking,” Tara said. “Our very own Sarpanch.” She pulled out chairs for the two men. “But you’re not here to talk politics.”

“Always complaining, Bhabhiji. You must feel miserable, feeling so miserable.”

“Why do you drink so much?” Tara said.

“Why not? Your wife’s left you. There’s five children in your care. Five. And you’re out drinking with your buddies which leaves your mother to raise her grandchildren. Have you no shame?”

“You think I’m allowed to say anything?”

“You be quiet. Alcohol kills people. It damages your liver. It destroys relationships.” She looked at Gopal. “You need to get help. Your wife is gone, at least do it for your children.”

“Yes, Gopal,” Diwan said, “I agree with Bhabhiji. Get help.”

“You’re one to talk, Diwan. This is a joke for you all. The men can go wherever they like, whenever they like, sit around, have a peg or two, play cards, and when they get home the woman should have their food ready, piping hot. I say if a man comes home drunk, his woman shouldn’t cook for him.”

“Yes, we know,” Tara said, “we know. They are the guardians of the gates of hell.”

The three men rose to their feet. As they walked downstairs Tara called out.

“I know what you rascals are up to. I just spoke to you about addiction and now you’re getting yourself a drink.”