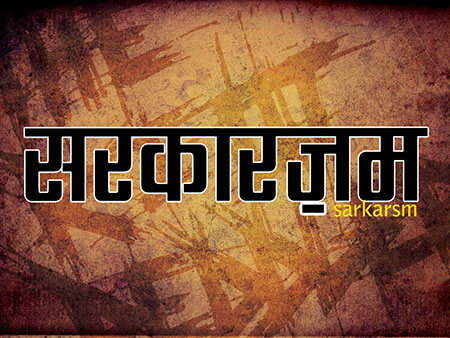 The Riot Peddlers are a three-piece punk band from Bombay comprising Ashwin Dutt on drums, Arun Singh Ravi on vocals and guitar, and Animesh Das on bass, and the trio has recently released its debut E.P., Sarkarsm. They are also, supposedly, India’s best hardcore punk act.

Now, this supposition goes a long way in building up expectations if you’re going to listen to them for the first time. “There’s actually a lot going on in the country that could do with punk awareness,” you think. “Maybe the band will write sharp lyrics with clever music that can also rock its head off.” The purpose of this review is going to be about debunking some of the hype, because the Riot Peddlers pretty much do none of those things. Let’s go with the good news first. First of all, the Riot Peddlers is a top-class name for a punk rock band, and Ravi performs with a mohawk, so they’ve already got the first-impressions part covered. This 12-minute blitzkrieg of an E.P. starts off Ravi nasally mimicking a Dilwale Dulhaniya Le Jayenge song between ominous drives of rock, in a song aptly titled ‘Bollywood Songs’. Apparently, Bollywood songs on the radio make the Riot Peddlers so sick that they’re dying and, in a fit of tinselly rage, also makes them want to kill everyone they see, but no matter. Credit must be given to the outro chorus in which they dash off a clever parody of the same D.D.L.J. song.

‘Sau Rupiya’ is, by and large, a decent critique of the materialism of today’s world, peppered with a chanting of the song title which is sure to get stuck in your head. ‘Chai Pani’ is a brusque, brutal commentary on our police force, and you’ve got to admit that music-wise, Dutt, Ravi, and Das are on top of their game. This fact is also impressively clear on the token anti-establishment song, entitled ‘Where’s the System’ (surprise!).

The good thing about the Riot Peddlers is that all three of them are very good musicians who’ve listened to enough Rage Against the Machine to pull off a decent rendition of the same. But the bad thing about the Riot Peddlers is the same thing: they’re pulling this off, but they are actually not saying enough with their music. Punk is supposed to be clever in its chaos, with lyrics that are sharp enough to bite while you’re listening to music hardcore enough to say “fuck it all”. So on ‘Platform No. 3’, when Ravi sings, “The train on platform three is filled with religion / Divide and conquer and the fucking end of secularism”, or on ‘United We Stand’, when he sings “In this world everything’s great, when you push the ones that talk, away / But you can silence us all, united we stand, divided we fall!”, you’re just cringing inside, instead of feeling anarchically in control of everything like how punk is supposed to make you feel. Please, Riot Peddlers. Please. The 10th standard punk band at my school (and everyone else’s school) wrote the same, if not better, lyrics.

The problem doesn’t just lie with the Riot Peddlers, though. India, with its still-nascent music scene, might just not be ready for a hardcore punk act yet. The Riot Peddlers, like every other band in India, will have to play the same four or five venues in the same five or six cities if they are to ‘tour’ and ‘establish’ themselves. What’s so punk about that? There just aren’t enough kids listening to punk, let alone the Riot Peddlers, and even if they do, there are even fewer that listen to punk and then go on to view the world with cynical critique.

However, Sarkarsm, clocking in at a little less than a quarter-hour, shows promise. Besides, no decent punk band was ever captured properly on record: at least never as well as their live shows. The Riot Peddlers play at the spectacular pay-what-you-want initiative gig Control ALT Delete this Sunday, so before you make your decision based on general hype and/or tl;dr music reviews, you should definitely check that out.

And if you want to hear what brilliant-punk-in-under-fifteen-minutes sounds like, do yourself a favor and download the latest Joyce Manor album.