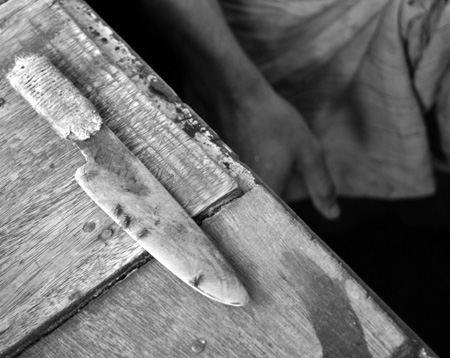 I am not a ‘senti’ person. I don’t cry at movies. When I have friends sobbing, I pat them. Awkwardly. Once, when I was five, I watched a chicken being killed. Without flinching. So, when I went to buy mutton at the local mutton shop last week, the severed head of a goat lying a few metres away from my face did nothing to deter me from peering at it, curious. The hand that kills. Photograph by Sanchari Sur.

“Where do you kill your goats?” I ask the guy.

Young and dapper in his lungi, Nafeez says, “Why! Right here!”

Not having seen him do it even once in the past two-and-a-half months I have been here in Calcutta, I prod, “But when?”

That explains why. I am never up that early, except when I am headed to the fish market. Before I can curb my tongue, I ask, a trifle too eager, “Can I watch? I mean, can I photograph?”

I am not sure why I make the request. I am even not sure why I have this sudden morbid desire to photograph the last few moments of an animal’s death. But what I am most not sure about is why he doesn’t react negatively to my strange request.

I arrive early. The shop is yet to open. The streets are getting busy with people rushing to work or school. Some of them give me stares. Dressed in my pajamas and a hoodie, with my camera bag on a weekday, I must be an uncommon sight. I ignore the white noise, waiting patiently for Nafeez. But Nafeez doesn’t show. It’s past seven. Another guy, much older in appearance, shows up. I have seen him before. I assumed he was Nafeez’s father. Or assistant. I watch him open the locks, and sweep the front. I ask him about Nafeez. He shakes his head and asks me to call him, offering a number. I feel awkward about calling my local butcher, so I decline, indicating that it’s okay, I will wait.

I wait. It’s almost 7.30. The sun is at a high. The traffic is worse. The number of staring people has increased. I can feel myself sweating under my hoodie. I curse myself. I should have never come on a weekday.

Finally, Nafeez shows up. Smiling, headphones plugged into his ears. He is unapologetic. Instead, he gets to work. Quick.

His shop, like most butcher’s shops, is raised at a height. What I didn’t know was that there is a reason for that height. The shop houses live goats underneath its floor. Nafeez removes one of the floorboards, indicating inside, “Are you sure you will get good photos while standing outside?”

I peer into the darkness, the bleating of the scared goats much clear now. I see two to three goats scurrying around in circles in the enclosed space. One of them sticks its head out of the gap and bleats frantically. I imagine it saying “help!” I want to feel bad, but I feel nothing. My head says it’s going to die anyway. Might as well document it. “You are right,” I say instead, as I climb onto the shop floor, making room for myself in a corner. Nafeez takes a small knife, and reaches for one of the goats. It escapes him. He quickly reaches for another, trapping it with his thigh. I watch, unable to click. In a few seconds, he has cut into the jugular.

It strikes me that this is what a ‘halal cut’ is. I watch the goat struggle briefly and then die a slow, silent death, as its blood forms a small pool at Nafeez’s feet. I click. And click. And click.

A customer, an upper-middle class Bengali babu, waits outside, impatient to get some fresh meat.

To Nafeez (in Hindi), “How long will this take? Should I go to that other shop?”

To me (in Bengali), “So, what is that you want to gain from taking these photos?”

Before I can defend myself, Nafeez answers on my behalf, “It’s her pleasure.”

Later, I ponder over his words. Was it my ‘pleasure’ to watch this poor beast die? Was I a sadist?

Once, not too long ago, someone I know was excited about his trip to Barcelona. The first thing I had asked him, though, was whether he was going to see the bullfights.

“Uh… I don’t think so. I don’t really like the gore,” had been his answer.

Well, I don’t know about the gore, I had said, but think about it. The poor thing is going to die anyway. Shouldn’t you honour its death with your presence?

We had laughed about it. Ha, ha.

Laugh, why don’t you?