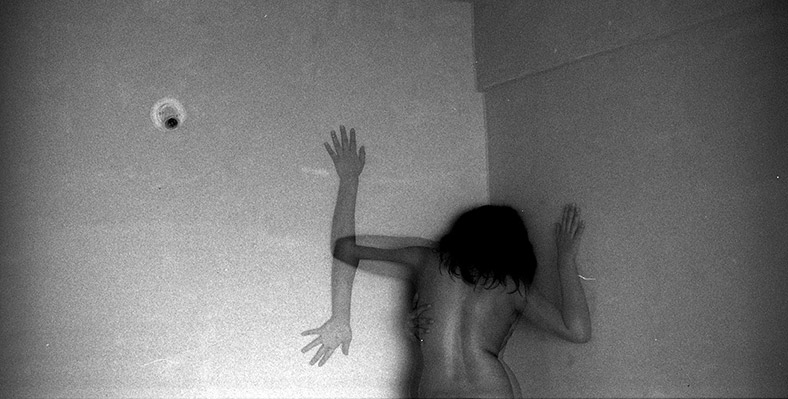 Stalked: Scars in Time & Space is an essay of black-and-white photographs by Mumbai-based filmmaker Aishwarya Arumbakkam that aims to portray the violation, humiliation, and trauma experienced by victims of stalking; to encourage understanding and dialogue about the same. Stalked: Scars in Time & Space will be exhibited at Atta Galatta in Koramangala, Bangalore, from March 20-23. Photograph by Aishwarya Arumbakkam.

The inspiration for Stalked came from Items, another essay by Arumbakkam that was exhibited at the Wilding Festival in London in June 2013. Items is a series of black-and-white photographs featuring strong, independent women wearing iconic costumes made famous by various Bollywood item girls over the years. “As I was working on my piece for [the] Wilding [Festival], I found myself reacting to various stereotypes in Bollywood, Indian movies, and media in general,” says Arumbakkam. “Stalking is portrayed and perceived as an act of jest, something to be forgotten and forgiven. People fail to see and understand the long lasting, violent impact it has on the victim.”

All the individuals featured in Stalked are real victims of stalking, people that Arumbakkam knows or came to know while working on the essay. “Their stories and experiences form a huge part of the narrative,” says Arumbakkam. “Through the process of talking to these survivors and making these images, I attempt to create a space for the victims to accept themselves and their bodies, and take a step towards moving on from their haunted past.”

Stalked: Scars in Time & Space is produced by Offroad Films and will be exhibited at Atta Galatta in Koramangala, Bangalore, from March 20-23. Other events will also take place in collaboration with the exhibition, including a limited-edition zine launch, a contemporary dance performance, a panel discussion, and performance poetry.

Helter Skelter Workshop: Behind the Panels