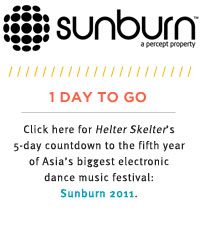 The day before Sunburn heralds truckloads of anticipation, a last-minute dash for travel and accommodation arrangements, and you going berserk with your personal mental checklist. We round off our five-day countdown to Sunburn 2011 with five essentials that you can’t do without at the festival, and a little must-do list to add to your experience.

Star-struck.
Find an artist you love and ambush them eagerly with big smiles. Tell them you love their music and ask for a picture where they have an arm around you or one where you both pull funny faces at the camera in evident camaraderie. No festival is complete without a picture with a famous person! Get them to sign your arm and vow never ever to have a bath again. Funkadelic.
It’s the time of the year to make heads turn. At Sunburn, on the sands of Goa, nothing is too out-there. Bring out your funkiest, most eye-popping fest gear, from our favourite colourful afro-wigs to glares big enough to cover up that awful hangover you’ve been nursing!

Crowd surfing.
So there’s going to be many thousands of people thronging the beach, and in that mad sweaty dancing mob, people are bound to step on your toes, knock over your drink with excitement and push you around until you’re black and blue. Don’t forget why you’re there though—nobody’s going to be able to step on your trip if you’re in it for the music. Get yourself a schedule so you know when you want to be where—no one will stand in your way when they see you strutting your way from stage to stage like a boss.

Post-party blues.
The After Dark Parties at Sunburn are known to be the culmination of the day’s celebrations, with a pre-announced lineup. They are exclusive and much talked about. Try and attend at least one After Dark Party at the festival—for bragging rights, if nothing else!

Louder, please!
Get photographed by the Helter Skelter team—we’re on the lookout for the funkiest, best-dressed (and worst-dressed) folks at the parties, the happiest day-trippers, and the most eye-catching festival-goers. Flash us a nice smile and you could land up in our photo feature! What you can’t do without:

Your own pillow.
Let’s face it—by the end of the night, you’re not sure where you’re going to be. Dancing on sandy beaches like crazy people all day can be pretty exhausting. By carrying your own pillow which you can happily tuck into your rented bike or car, you ensure that you can crash whenever you realise that you just can’t hold your head up any more!

Pepper spray.
This is one for the ladies, and also for the men who’re sexy and they know it. In a crowd of fifty-thousand, you never know who’s after what exactly. To avoid making paranoid are-you-going-to-mug-me-now faces at passers-by, equip yourself with this simple but effective spray. Better safe than sorry, yes?

A good camera.
If Nostradamus had it right, this might be our last Sunburn ever. Might as well chronicle it while you’ve got the chance, right? Even if it isn’t, everyone still secretly likes going through unflattering pictures reminiscent of happier times after the festival. A win-win situation, if ever there was one.

A dabba phone.
As much as we all like to think of ourselves as responsible people, beaches are no friend to smartphones. Leave those fancy phones behind and bring out your basic Nokia torch-phone. It can light up your path late at night and you can send and receive text messages and calls. Plus, if someone really is making paranoid I’m-going-to-mug-you-now eyes and the pepper spray isn’t handy, you can try flinging this tough mother at his head.

Loved ones (the more the merrier).
Best friend, boyfriend, girlfriend, parents—don’t turn up at Sunburn lonesome on-your-own-some. Mad trips are only fun when they’re shared with mad people!