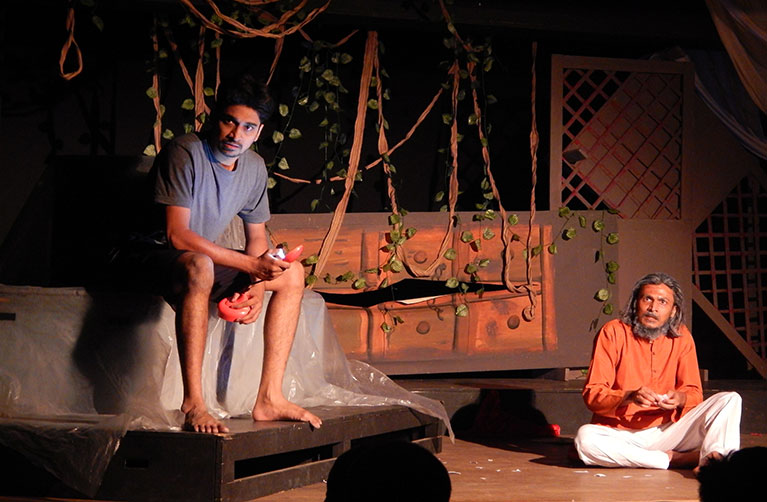 Dhyaas is a five-year-old Marathi language theatre company in Pune known for its extensive and award-winning work in experimental theatre. This year saw Dhyaas stage its first official theatre festival, called Connections. The festival ran for three days, from April 9–11, at the Jyotsna Bhole Sabhagruha in Pune’s Maharashtra Cultural Centre and comprised three plays: Andharacha Bet, Parvana, and The Transparent Trap. I took myself to two of the festival’s three plays and caught up with the director of the company, Shrikant Bhide. A still from Andharacha Bet.

“We’ve been getting a huge response to these plays,” says Bhide. “They have very different textures, themes, and stories, which is why we called the festival Connections. It is about the connections between the plays and the connection between the audience and our plays.” Andharacha Bet, which is the play I missed, is described by Shrikant as a drama within a drama, a play about the theatre person. It explores the shades of people doing drama and is especially popular with people who do theatre.

The second play, Parvana, is based in Taliban-ruled Afghanistan. The gripping play follows the life of the eponymous character, a young girl’s journey of loss, friendship, love, and responsibility. Parvana uses poetic dialogue and skilful acting to bring to life the true story of grief and struggle initially told in Deborah Ellis’ famed novel The Breadwinner (2000). It follows a family of five, three young girls and their parents, who lose their patriarch to the Taliban and find themselves in the unenviable position of having to fend for themselves. Parvana follows the life of a young girl on her journey of loss, friendship, love, and responsibility.

The middle child, Parvana, is convinced to cross-dress and ‘turn into a boy’ in order to avail of the social and economic liberty awarded to men in Afghanistan so that she may bring home the bread for her family that now comprises only women. The story traces the fates of the individual characters and ends on a note of emotional distress and foreboding. The real triumph of the play is its production: it makes clever use of an adaptable set, carefully lit scenes, and a well-designed soundscape. According to Bhide, the triumph of the play is that it has the beauty and quality of a commercial play. In keeping with this, the performance conveys a sense of reality that is difficult to dispute while viewing it, and that only adds to the turbulence of the story and its characters. Through the thick curtain of political turmoil and oppression, we peer at the transition from childhood to adulthood that our young protagonist experiences, tackling sensitive issues about gender, education, and liberty.

The final play at the festival was The Transparent Trap. Told entirely non-verbally, through an original soundtrack and carefully choreographed interpretive dance, the play tackles the world’s relationship with plastic. The appeal of this play is the unique narrative choice. “We generally have language-oriented theatre in Maharashtra and in the rest of India,” Shrikant explains, “so we are not used to this kind of theatre.” This becomes the play’s greatest advantage. By the interactions between humans and various animals struggling with the toxic effects of a planet being taken over by plastic, the play proves that drama can go beyond the verbal and, sometimes, into the metaphorical, allowing its audience to interpret the tableaus of human and plastic figures as they please. The Transparent Trap has been performed before at the National School of Drama’s Bharat Rang Mahotsav, Orissa’s Mathakai Theatre Festival and the Colombo International Festival in Sri Lanka. It transgresses the problems and boundaries posed by differences of region and language, speaking in a universal tongue about an increasingly urgent issue.

Where’s Your Head At? Told entirely non-verbally, through an original soundtrack and carefully choreographed interpretive dance, The Transparent Trap tackles the relationship between the world and plastic.

Thinking about the plays and the themes explored at Connections, I ask Shrikant if he looks for specific issues in his plays, or if he writes based on instinct. “I’m from a visual arts background, so I prefer textures where I can speak with visuals,” he answers. “I like plays which can have a psychological impact on their audience. Entertainment, for me, is something where an audience is transported to a different world, in a trance.” Dhyaas certainly succeeds in creating that trance—rarely has there been more silent and attentive an audience than I saw at their festival. This leads me to my next question: have they thought about the future of the festival? Where do they see it going? “These three plays have given us an identity as a theatre group doing experimental theatre in Pune,” Shrikant says. ”Maybe after two or three years, the connections will grow larger. Marathi theatre is very strong and renowned in our country, and artists are interested in performing in front of our audiences.”

The Connections theatre festival is a sign of the changing tide of Marathi theatre in Pune, making it younger and more accessible, and placing it firmly in the landscape of theatre and performance in the country (and, hopefully, the world). The aim of the festival is to place theatre in Pune on the global map, and their first edition was a great start, combining social messages with well-written scripts, top-notch acting, and high standards of production.