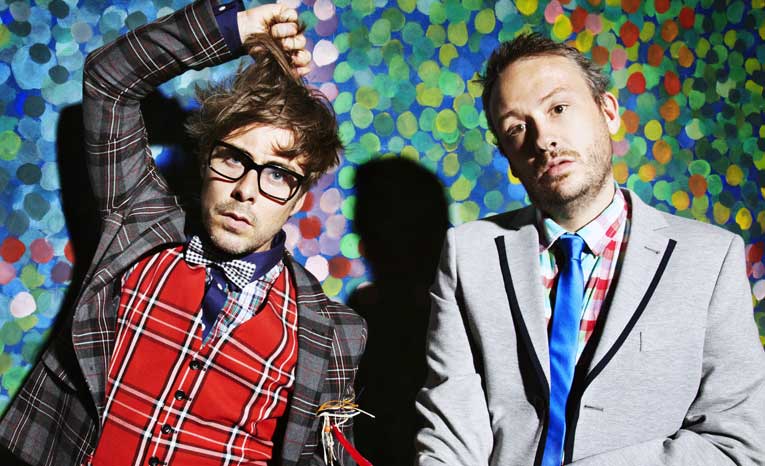 Felix Buxton, one half of Grammy Award-winning house music duo Basement Jaxx, performed a very special DJ set at the Bacardi NH7 Weekender last night—his second appearance in a scheduled four-city tour of India. We caught up with him right before he took the stage for an exclusive interview about the India tour, his creative process, and Basement Jaxx’s future plans. Read on for excerpts— When you and Simon got together, how did you decide on the name Basement Jaxx?
We started in a basement in 1994. I met Simon [Ratcliffe] through friends of friends—he had some musical equipment and I wanted to make some music. At the time I was putting together some parties in London—I was trying to simulate, just, my idea of what a party would be like in a New York basement. At the time, I was very fond of the house music coming out of New York and Chicago. Well, [we picked] ‘Basement’ because we started in a basement doing underground-style music, and ‘Jaxx’ because jacking was the kind of dancing style from Chicago. At the time, dance music in England was very regimented and very straight, and the music from Chicago had a kind of shuffle and swing to it and was way more rhythmical and appealing.

House music isn’t really known for its lyrics, and yet all your lyrics are printed in your album inlays.
Well, I write most of the lyrics. Often I’ll show Simon the lyrics and he’ll sometimes edit them. But we’re just making songs. Whether we’re making house music or any other music, it’s always been about making songs. Felix Buxton is currently on a four-city tour of India.

Could you tell us a little bit about what it was like for you to work with Yoko Ono on your album Scars?
It was amazing. Initially, with her, I didn’t even know if we would do a song. I just wanted to interview her. The fact that she was around in the ’60s, which was a time of peace and love and new aspirations about how people could live. Then that whole sort of hippie bubble collapsed. More than anything, I suppose in a way there’s a parallel there with acid house culture. To me, 1988 was a summer of love. I believed it was a new generation of change. In the football terraces in England, the guys who would always be drunk and fighting and stabbing each other, they were all on ecstasy and suddenly all peaceful. It seemed as though there was a cultural shift. But it wasn’t to be prolonged. With Yoko Ono, I thought that the things she was working on around then seemed very positive and [done] from a really good perspective. At the time I was doing a lot of soul-searching and I was interested to know what she thought was the key to life.

So it was personal, then?
Yeah, initially it was completely personal. Then I heard a song of hers called ‘Kiss Kiss Kiss’. Well, I’d never really heard her music before. I was trying to find a John Lennon song called ‘Woman’, which is one of his more sentimental, soft songs. It’s probably not in the cool magazines, or whatever (laughs). I remembered that song and tried to find it and then I discovered Yoko Ono’s stuff. We heard from one of her managers that she was excited by our (Basement Jaxx) music and ‘Romeo’, which was great, and it reminded her of Japanese pop music from when she was young. Suddenly it seemed like quite a few things were happening and I wanted to meet her. I thought maybe we could work together and do an instrumental piece with just her talking on top of it. The weird thing with that in the end was that she kind of arrived and then said ‘What do you want me to sing? What do you want me to say?’ and I thought she was Yoko Ono and she was going to tell me what to do! Luckily I had some stuff that I’d experimented with before—the idea that you just take a train of thought and you don’t know where you’re going. It was quite abstract. The second half of the song was just this kind of stuff, and she just read it out. But after the song was out, NME or some other magazine in England, said something like, “It’s pure Ono” (laughs). Which is always funny, the journalistic angle. In England, there’s always this cynicism. They’re always trying to break everything down instead of building it up and seeing the good in stuff. It’s understandable, but I think that’s one thing in society, particularly in England, that we’ve got wrong. It’s just basing everything on negatives and stereotypes and just building on these things rather than building on, you know, making light of a situation or being more understanding.

“The best dance scene in the world is probably in someone’s living room.”

You’re very fond of globetrotting and have travelled to and performed at various places around the world. Where do you think the best dance scene in the world is at the moment?
Probably in someone’s living room. For me, that’s where the best dance scenes are. It’s all about being with some people who are really excited about any music, dancing away to their heart’s content. With, sort of, club culture, it’s becoming more and more homogenous—all culture worldwide is, anyway. I like it when you meet young DJs that are really enthusiastic, and they’ve not got the trappings of, like, this is what a big club needs. It’s just music that you enjoy and connect to. The more something gets established, like club culture, you’ve got a sort of more professional side to it. You have the big clubs and the whole, kind of, industry of it and the bouncers and this and that. Then you start building levels of authority and attitude and expectations and all these things, and then suddenly you have to remember: is everyone really happy and having a great time? In the living room, more often that not, they are. Felix Buxton, moments before taking the stage at the Bacardi NH7 Weekender. Photograph by Arun Kale.

What have you heard about the Bacardi NH7 Weekender? Did you have any expectations coming in to the festival?
Well, generally with my India tour I’ve got no expectations of anything, because that way I’m not going to be disappointed. I think that’s my general philosophy of life. My friends said before I left for India that “you must be really excited”, but I think it’s good just to go with the flow and experience what happens. I don’t like having too many preconceived ideas. I mean, I’m like that with films at the cinema. I don’t want to read the reviews and know all about every aspect of it. I want to see it and feel it, experience it, and then make my judgement. I’m very excited to be in India, anyway. I’ve been DJing here starting a couple nights ago and it really feels like being in the deep end, because I have really no idea what the people are into and it’s just kind of like…

Going out on a limb?
Yeah, which is good to do, but slight scary (laughs).

Everyone’s really excited to see you at the festival.
That makes it even worse! (Laughs)

What’s next on the agenda for you? Are you guys are working on a new album?
Yeah, that’s the general plan. Yesterday, I was recording a singer and a flute player after visiting the Taj Mahal. I’m hoping to collaborate with people in India, as much as possible. I went to see a qawwali in Delhi, and I thought the singers there were incredible. Am I saying it right? Qawwali? (Smiles) Yeah, and I’ve heard some great music yesterday which I got off my taxi driver on a U.S.B. stick. He had a lot of really good Punjabi stuff, but he didn’t actually understand what they were saying (laughs). I always like hearing the music of the people, wherever it is, and often I’d rather get the music off a taxi driver than, you know… This is what moves genuine people and is a part of their worlds. And it was a lot less cheesy than, you know, a taxi driver in
England (laughs).

Do you have any Famous Last Words for the people reading this interview?
I’m just really happy to be here. There are so many people here in India, and it just feels like the country could achieve so much. People have been really friendly and there seems to be lots of genuine enthusiasm. I think India’s got an exciting future; I really do. In England, we had the riots a few months ago, and I don’t know, things have gotten to a stage where the greed culture has gotten a bit out of control. I don’t know if we’re going about all the best ways to finding happiness. I think in India, you’re just in a different kind of situation. You’ve still got the potential to not mess things up (laughs).