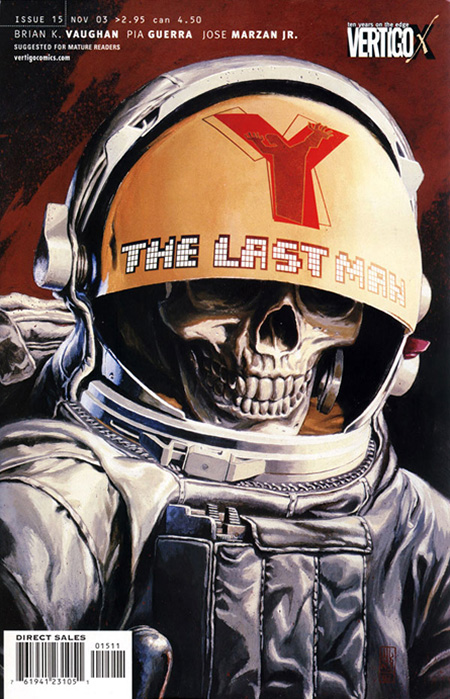 The Dawn of Opinion

Imagine: A life that does not have you groaning over toilet seats or empty bottles or over-flowing ash trays.

A life that does not require you to be on your best behaviour, worry about bad hair days, or lose sleep over the fact that you are completely and utterly incapable of being the centre of someone’s world because your brains are dysfunctional or because of that odd zit sitting proud on your nose or that extra tyre of flab that is more attached to you than anything has ever been.

Imagine, a life without unnecessary drama and complications and heartaches and breaks and all that you classically link up with male companionship.

Far from ideal. Isn’t it? Winner of five Eisner Awards, Y: The Last Man is nothing short of breathtaking.

July 17, 2002, witnesses that very apocalypse, as all creatures with the Y chromosome all over the planet mysteriously start dropping down dead. All but two, that is. Yorick Brown, an escape artist, and his pet monkey, Ampersand.

Winner of five Eisner Awards, Y: The Last Man is nothing short of breathtaking. Brian K. Vaughan’s and Pia Guerra’s fantastic storytelling takes you through a whirlwind ride that defines chaos as infrastructures collapse and the survivors try to deal with the tremendous losses they are faced with. The feeling of desolation, the desperate attempts to survive, and an ingenious political power play that keeps getting more intense with every passing episode is illustrated to perfection. The consistency with which the story progresses is impressive. It’s always easy to start off a tale of apocalypse, but sustaining the pace, the twists, and the appeal of the tale is not easy. Writing without spoilers becomes a very difficult task as the plot thickens and the mind dives into a whole lot of realisations that become clearer with each passing episode.

The dystopian world that belongs to women is soon discovered to be a part of a larger conspiracy that will shock and thrill, if nothing else, with Yorick remaining as the sole male and the apparent answer to the world’s problems. The headstrong son of a U.S. Congresswoman, Y’s problems are not merely limited to being the sole male surviving on the planet. On the run from a group of Amazonian women who aim to eliminate all shreds of mankind from earth, Y’s journey towards Australia to see his girlfriend is riddled with plots and subplots that make it very difficult to stop reading the series. When I started reading it, I had indeed expected the books to soon fall into the pit that is so characteristic of apocalyptic clichés. At the end of the 60 episodes, I was pleasantly surprised. With the Israelis and clones adding colour to the episodes, there is no chance in hell you won’t like the series—unless your sympathies lie with the Republicans, who have been the butt of some rather cruel and funny jibes from the very beginning of the adventure!

Pia Guerra’s artwork is definitely stable and takes care of each and every minor detail that might have missed the eyes of most artists. Y’s journey through the years, from a lovestruck boy, to becoming the only hope for survival has been established beautifully by Guerra. Coupled with Vaughan’s storytelling abilities, the characters conceived exude this incredible charm that impresses, dazes, and awes. Even more awe-inducing is the fact that post the apocalypse, the world is not as grey as one would expect it to be. There is a marked difference, but signs of struggle and survival rule supreme. In fact, the more you read into the series, the more you realise how brilliant the Vaughan-Guerra team is. Replicating a world and not going overboard with it when disaster strikes is something that is not easy to achieve. But it has been done admirably. Moreover, it is the visuals that actually trigger off the thoughts. The same thoughts that led me to wonder what a world would be like if such an apocalypse actually hit…

Reading Y: The Last Man and trying to write about it from a rather objective point of view did turn out to be quite an ordeal for me. Moving away from the realm of asking the creep to lay off with the overused “Not even if you were the last guy on earth!” towards one that made me realise that life is actually impossible to imagine without the father and the brother and the dog and the friend and the special one.

We crib and complain and cry and complicate, yet the confession at the end of the day reads that men are essentially what make us smile. The sudden surprises, the cup of coffee that wakes you up, inane conversations at the dead of the night, the groan-inducing jokes, the little puppy who grows up to be the most terrifying creature on earth, the drunken brawls, and hell, even the toilet seats!

Progress, No Matter the Cost

The Dawn of Opinion