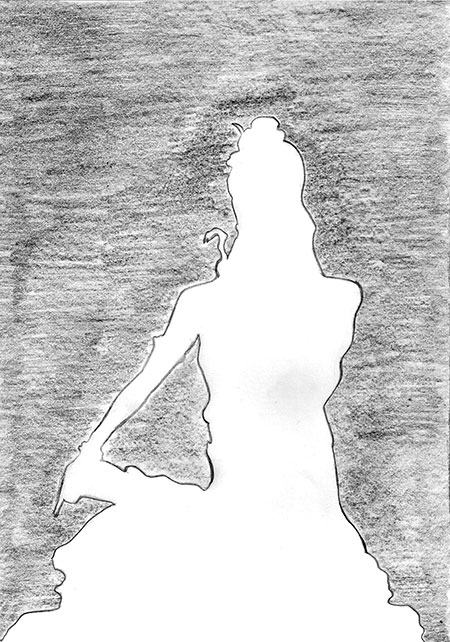 The marble floor begins to fill up with people. Some choose places a step or two above the temple floor, some closer to the water from where one can see both the havan and the river. Majestic, grey-white, Shiva meditates cross-legged on a seat upon the water. His eyes, all of them, are closed.

He looks serene but not frozen—he could stir at any moment, stretch his long and muscular body, “… bestride the narrow world…” When the river rises, the platform is submerged and Shiva rides the current, swells of water lapping against his thighs. Just now, he is wreathed in shadows. A group of young brahmacharis dressed in yellow file in, arranging themselves right by the havan and along the platform behind it. Someone produces a harmonium, someone else a pair of cymbals and the prayers begin. A figure in burnt-orange robes with long hair and an untamed beard sweeps down the stairs, chanting; the swami of this temple. More voices join in, the devotees began to sing along with the chorus, clapping in time; the tempo quickens. Then it is time to light the lamps. The swami picks up an ornate long-handled brass tray that blossoms with camphor-fed flames and begins to swing it effortlessly in great arcs. The fire burns glowing rings in our eyes and Shiva’s torso ripples in the half-light. The smouldering orbs, the cymbals, the chanting, the smoke all build up to a tremendous crescendo. And then it is over. The swami blesses those closest to him and then turns and swishes up the stairs and out of sight. The crowds stir and begin to hunt for their slippers from among the piles outside.

We’d spent every afternoon this week at the village Internet café researching university programs for our undergraduate students. I’d finally sent in a funding proposal for a theatre course I’d wanted to take for years, and was hopeful and exhausted. The last bus ride we had taken had been a six-hour nightmare during which I threw up every sip of water I took. So we were inclined to stay home this weekend and spend it doing nothing. Then on Friday, I found out that the funding hadn’t come through. Another bus ride didn’t seem such a big price to pay for some distraction; and it wasn’t. Rishikesh wrapped itself around me like a Rajasthani razai—light and soft, cool and warm at once.

A lot of the temples and ashrams sit by the water, and since they are the main draw, the markets naturally follow the people. In an open corridor flanked on both sides by little shops, there are bookstores packed to the ceiling with titles in philosophy, scripture, and Sanskrit that are usually hard to find. There are jewellers displaying silver and prayer carpet salesmen stocking yoga mats. Cotton kaftans and pajamas swing from hangers overhead. You could listen to Crispian Mills and Asheem Chakravarti while rummaging through rattan baskets of scented candles. If you stop long enough, friendly mutts stick wet noses trustingly into your palm to say hello. Like Sid.

Every morning after breakfast Siddhartha would dash away down the river bank, sticking his nose into anything smelly and lavishing indiscriminate love at everyone he met. He either had no sense of direction or was easily distracted, as he didn’t always find his way home. He would then be brought back by some kindly soul that recognised him, looking as sheepish as a dog can look. He’d turn his tragic eyes up at us and whine as though he hadn’t been fed for a week. One such time he was missing for three days before he was found in the village across the river, bedraggled and collarless. He’d clearly been in a fight, stank of every sort of rubbish and looked like hell. We couldn’t hug him enough.

I can’t really tell why there was so much stillness in such a busy place. Rishikesh had all the trappings of a tourist town but wasn’t smothered by them. I could see the yoga center adverts and the beads and the cleansing tea but it wasn’t stifling. Something made it possible to filter and separate sights and sounds like the software that studios use. I could see and hear and feel everything without being overwhelmed. We had just a few weeks left in Ujeli now. I went back feeling like you do after a swig of water in the middle of a long, hard, sweaty, glorious run.

Most of the restaurants had menus artistically scrawled on blackboards and white boards leaning outside their doors. We chose a café that had a promising staircase winding out of sight at the back. Four small tables with identical blue tablecloths filled the little terrace upstairs. Candles flickered from inside glass bowls. The river flowed below, shiny and black. We sat down and ordered quickly—it was getting colder every minute. Out of nowhere, a storm cloud burst into wild rain that banged on the corrugated metal roof and blew under it. We were drenched in a minute. The candle flames guttered desperately; the table clothes flapped and tried to fly away. The couple at the next table, done with their dinner and holding hands over coffee, got up and ran downstairs, dripping. We stayed. Steaming bowls of soup warmed us from the inside out; the fury subsided as abruptly as it had begun. Dinner and a show.