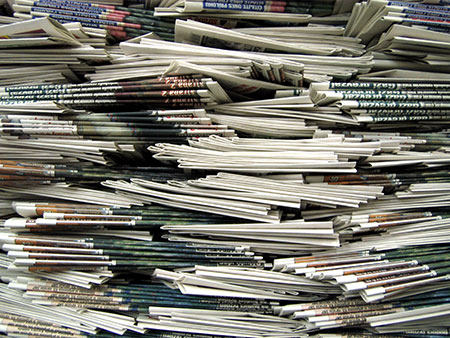 In a world where the media explodes every morning, afternoon, and evening in your living room, even as up-to-the-minute news and views are delivered to whatever new-age gizmo you’re partisan to, it becomes increasingly evident that we live in times when more and more people are realising the importance of having an opinion.

While this development holds much excitement for trolls and forum-dwellers across the countless platforms that populate the internet, the democratisation of the right to express one’s opinion needs deeper scrutiny. Often a mirror for influences and references, the right to an opinion today is caught in trying times, with hyperbole and extremism taking centre stage in almost all public or private discussion, compounded by the influence of suspect role models and modern pop culture.

So, often you find yourself trying to discern bare facts from a representative media reporting stories with questionable motives, most regularly to command a niche in the public memory. Info-tainment, as some maverick media mogul conspired to name it, might have made consumption of news easier, but it makes light of the media’s long understated aim of presenting/reporting happenings threadbare, thus enabling the ‘common man’ to understand and analyse for himself, allowing the consumer of media the priceless time needed to grasp and to digest, before regurgitating an opinion for lesser mortals. We live in times when more and more people are realising the importance of having an opinion.

We haven’t moved far from the times when the only person who read the papers or watched the news channels at home was the brooding patriarch before, during, or after a hard day’s work, even as repeated ultimatums were issued to the young to cultivate a habit of staying abreast with the important happenings of the world. Media channels had a time, place, and motive, with the diurnal news telecast reporting happenings in half an hour flat, while the analysis was left to the print editions of concerned rags the next morning. The advent of the news anchor-analyst, rise of the 24-hour channel and finally the rampant inroads that the access to the internet has made into the Indian populace, chart a trajectory that has landed us in a place where everyone is saying something, wanting you to listen or read. For the layperson, the gullible ‘aam aadmi’ on the street, bombarded with nuclear-powered words by the media rhetoric, taken in by the glitter of the subject of said hyperbole, hope is dwindling. For the discerning reader, adept in the ways of consuming media, understanding implications and forming an opinion, the quandary is manifold. Let me illustrate this with an example.

A few days ago, a friend of mine, let’s call him Pig, aboard the Mumbai local from one distressing suburb to another, bumped into what looked like a duo of college youth canvassing with all their noble might for ‘corruption’ to vanish from the streets (and ostensibly the tracks, offices, homes, courts, urinals, both public and otherwise) of the country, taken in by a revolution portrayed by the relentless media as the Second Struggle for Independence. The duo walked up to Pig, and asked him to join in the protest, handing him a leaflet enunciating the manifesto for the movement. Being a polite Maharastrian, Pig returned the leaflet instead of following the more practised routine of crumpling it once the boys were out of sight, telling them that he didn’t support the movement. The boys were aghast, clearly agitated as to how their fellow ‘young man’ turned down their offer to join the most mainstream of protests, peppering their diatribe with gems criticising the young naysayers of their revolution like ‘such is the youth of the country’. Not to be outdone by the offhand remark about his patriotism and his youth, Pig merely asked, “Do you know Medha Patkar?” to which the duo, after taking a ponderous minute trying to recollect if any of their mothers had a friend by the name, they said, “Isko kaun jaanta hai, news mein thodi aati hai woh” (“Who knows her? She doesn’t make the news”), and turned away, leaving Pig with a heavy dose of the suchness of the youth of country.

The conundrum reaches pre-eminence in my interaction with people as even those who you might believe have the wherewithal to de-construct happenings and re-construct a perspective for themselves seem to fall prey easily to the manufactured stream of media hogwash, assuming that somehow, their display picture change is going to affect the way this pandemic of mindless hyperbole will pan out in the long run.

A few years ago, the problem with the middle-class youth of the country was assumed to be a sense of distancing itself from those spheres of social life that needed having a strong opinion, and the will to carry it through, for positive reconstruction of a maturing Indian state and its society. Everyone from Socrates to Sunil Khilnani and Pavan Varma named this facet of the middle class as its most crippling drawback, with the latter two enunciating in their splendid books, how a giant chunk of this behemoth of Indian society chilled, even as the ghost of a socialist state hung over the Indian democracy, sucking out it’s very marrow for ‘chai-paani’, leaving the positions of power and responsibility to be usurped by dynastical concerns, all the way to the top.

Today, at the crossroads of a world inundated by information, 360-degree-coverage of events of public importance, suffering from years of inaction, the sudden outpour of emotional condemnation or praise of (what to me looks like) a plastic revolution backed by a very similar set of people to those it seeks to pull up, the ones offering their opinion need to be careful, balanced in their outlook, and focused on the aims at hand, without which we shall have to be resigned to an interminable cycle of events that look, feel, and sound similar to the bravado of a world-changing revolution, but has political impact only comparable to a Royal Wedding after 30 years.