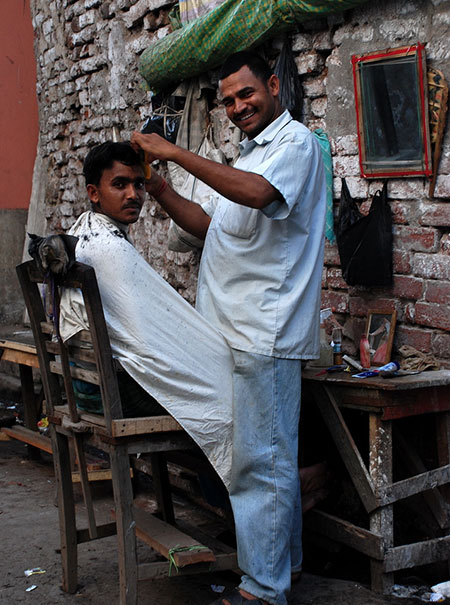 It is that time of the month again. The sideburns are skewed. Stubborn locks refuse to budge from the forehead, well on their way to assuming grotesque forms. The scalp is getting itchy all over and my concentration is waning.

The mirror does not lie. My immediate response is to put up a fight, but I already know how this ends. So while I steady my raging hormones and try to calm down my erratic nerves, I grudgingly prepare for my monthly pilgrimage to the Haircutwalla.

It has been more than three weeks since my last visit and my patience has been wearing thin. I tried convincing myself that I didn’t need a haircut, but reason proved to be a spent force against the bane of paranoia. Yet again. I have already assumed that I look like Ace Ventura and things can only get worse when you begin to think you are Jim Carrey. Yesterday, when an acquaintance had made a casual remark about my hair, I had been forced to desert my lunch halfway through and had managed the guts to make a public appearance only late into the night. Most people are better at this game than I am, for if the dentist’s chair is the common man’s nightmare, the Haircutwalla’s is mine. Haircutwallas all over my country seem to have preemptively assumed a birthright over the hair of their customers.

It would seem counter-intuitive but it took me two long years to narrow down on the Haircutwalla I prefer to torture me. This journey has seen me looking like a baboon, an orang-utan, and chimpanzee in turn. With stoicism that the ancient Greeks would be proud of, I have taken it all in my stride.

As expected, the shop is deserted and a few loafers are engaged in the uphill task of improving their coiffure. The parallel mirrors make them seem like hundreds of Jim Carrey clones who have gathered here to partake in some arcane ritual. The Haircutwalla is constructively engaged in consuming a Kannada soap opera. I nod my head at him and gesture that I need a haircut. He understands and puts on his apron. Trivialities like language, comprehension, and the customer’s needs never seem to bother the quintessential Haircutwalla. And mine is the best of his breed.

“Short, medium, trim?” he enquires of me.

“Just trim it around the ears and at the back.” I reply. “It hasn’t been a month since my last haircut.”

“Too many words,” I reprimand myself. He is not going to be happy. I smile to win favour with him but he has already begun sharpening his instruments.

“Hmm,” he grunts in disapproval and goes to work on my prized asset with patent indifference.

The Haircutwalla’s rhythm is steady and paced at first, confused and unsure halfway through, zealous and urgent towards the end. I might as well have closed my eyes for I had sealed my fate even before the journey had begun. You see, over the years, experience has made me wiser to the workings of that initial question: “Short, medium, trim?” Contrary to expectation and reason, those three words have never been used to refer to your choice in the matter of what kind of haircut you get at the hands of your benefactor. They have only been used to determine how stupid you will look once the Haircutwalla is done with you. The more you complain and mutter, the worse the things get. Common sense dictates that you keep your mouth shut and your eyes open. It would seem that the race of Haircutwallas hails from an alien planet where they are all taught to religiously revere just one diktat: “The customer is always wrong”. They have learnt their lessons quite well.

Haircutwallas all over my country seem to have preemptively assumed a birthright over the hair of their customers. If you so much as mumble in protest, I am quite confident a minion will appear from somewhere within the dark recesses carrying a placard that reads, “Owners’s hair cheerfully returned if not satisfied”. With the help of their hypnotic chatter and corny filmy songs playing over the radio or the television, a skilled Haircutwalla lulls you into a comfortable stupor so that you have little time to react when he goes ape-shit with your hair. By the time you are fully awake, the damage has already been done. And yet, when the push comes to shove, you make the same mistakes over and over again, giving your beloved persecutor the benefit of the doubt, until a dam is breached and you seriously consider patronising the upscale ‘saloon’ that bears the name of Jawed Habib.

Scissors snip menacingly, the naked razor blade wanders tantalisingly close to my ear, and cheap talcum powder is generously applied all over my neck. Within half an hour, my business with the Haircutwalla has concluded. I look like a marvellous monkey. I reassure myself halfheartedly that it could have been worse. Money exchanges hands and after trying to brush off the zillions of hair on my shirt and jacket for a few futile minutes, I try to disappear into the shadows. Today is a Tuesday. I prefer getting my haircuts done on a weekday. Apart from saving me from the weekend rush, weekdays make my ‘walk of shame’ a lot less shameful. With a bit of luck, and with my head bowed and my shoulders slouching, I will be able to get to my room without a single pair of familiar eyes ridiculing me with their measured stare or judgmental second looks. In the privacy of a well-deserved shower, I will have the time and the faculties to plan the week ahead.

Just like there are five stages of grief, haircuts in my country seem to have three. Although your personal harrowing experiences might prompt you to disagree and come up with slightly altered timelines, bear with me for a while. Week One is the phase of desperation. No matter what you do to your hair, no one can save you from looking like an idiot. I have seen ‘smart, handsome, and sexy’ friends turn into a pale shadow of their past selves once every month. Similar to perfectly decent individuals who turn into werewolves every time moon shows its full face, they hide their shame rather unsuccessfully. The second week is when things begin to look up. You look neat and well-groomed. Compliments abound and the world seems to be your oyster. This is the hump of the bell curve and it is a downhill ride hereon. By the end of the third week, the dreaded Haircutwalla has crept into your consciousness once again. The exuberance of last week has given way to irritation and uneasiness. Ace Ventura begins to appear in your dreams more often than is healthy and a lot of lunches are abandoned prematurely. The Haircutwalla smiles his sinister smile yet again.

But all is not wrong in the world of combs and scissors. Many benevolent haircutwallas, after they are done violating your honour, will oblige you with a rejuvenating maalish, as if making up for the mistakes of their fellow extraterrestrials. Rarely, some will even greet the disgruntled customer with a seemingly genuine smile, instead of the customary grunt, as he walks out of their den, planting the seed of doubt and suspicion in his mind. The poor fellow had already made up his mind to visit Habib’s the next month, but now he is not so sure. Little does he know that the wily Haircutwalla has several such tricks up his sleeve that will keep customers from committing adultery. Even though my relationship with the Haircutwalla can only be described as complicated, I had given up on such pretences of desertion a long time ago. I have never been the one to wage a lost battle.

“Jo aapki marzi (As you will),” I reply. He doesn’t understand. I keep my peace.

The aliens are not fooling me this time.