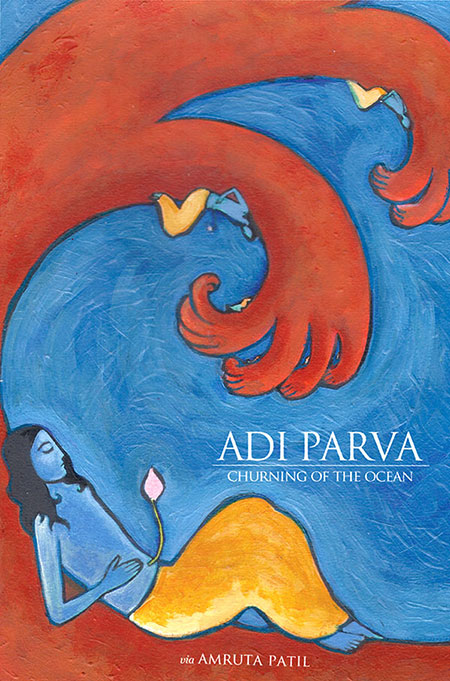 ‘There are some things your forefathers didn’t want you to forget,’ begins the first installation of a series of graphic novels based on the Mahabharat, as Amruta Patil sets out to tell what she described to Paul Gravett as the story of “every human preoccupation under the sun”.

This book is as much about restoring the scale of the epic as it is about retelling it. Remembering the forgotten knots in the sutradhar’s thread, Patil returns the Mahabharat closer to its original canvas; far more crowded and complicated than the narrative the lay Indian may be familiar with.

Retelling the Mahabharat has become a cliché, really—everyone seems to be doing it. But no one tells it with as much restraint as Amruta Patil. No one else has brought this kind of colour to the story before. There exists an assumption amongst those who grew up on the epic that they know and understand it. But as the book points out, ‘You are not held captive by old narratives. Tales must be tilled like the land so they keep breathing.’ Characters I’ve known of since I was four were rendered alien to me; nuances that did not exist were revealed as possibilities. Patil doesn’t try to impose judgments on the narrative; it is a retelling only, in so much as it gives more detail and more complexity to the epic as it exists in popular culture. It is not one composite story, it is constantly branching and re-branching into different, fractal narratives. The familiar Indra, Kunti, and Karna are encountered, but also the lesser narratives of characters like Yojanagandha and Amba crawl out of the original and become part of the story once again.

The story is told in the voice of Ganga, who in her mortal form is addressing a crowd of villagers around a tree. This conventional image of a village gathering and discussion is appropriated by the book to take the narrative to a space where it is only a story, politically and linguistically divorced from its religious and historical connotations. She is the sutradhar passing on the stories the book says our forefathers didn’t want us to forget. The storyteller’s trope mimics the way in which countless Indians know the epic that was transferred orally generation after generation. The world of the sutradhar and Ganga is accompanied with black-and-white illustrations, while the world of the epic is an explosion of colour.

There are pages that strike one dumb because of their sheer beauty. Patil brings alive the landscape of the multiverse of the Mahabharat, a world I had not previously accessed in such visual detail. Particularly interesting is her use of water, whether it is Ganga flowing down through the tear that Vishnu makes with his toe or the floating boatman who wished to be queen. The other astonishing feat of this narrative is the way in which shades of people and their intricacies come out via illustrations in a way that words alone could not have managed. There are some illustrations that feel incomplete as well, but they are too few and far between to effect the narrative adversely.

This book is miles away from the pale, dark world of Kari, Patil’s first book. It is a radically different voice, and I imagine it will appeal to readers for entirely different reasons. The sharp edginess of smog city has been replaced with the dazzling brilliance and power of the multiverse. Read this book. It is the Indian origin story wrenched open like never before.

Click here to read our Oct. 2012 interview with Amruta Patil about Adi Parva: Churning of the Ocean (includes a sneak peek at the book).

Click here to read our Jun. 2010 interview with Amruta Patil about her first graphic novel Kari.

Click here to purchase Adi Parva: Churning of the Ocean.