Physicists are an arrogant lot. And if Sheldon Cooper is any proof, they are usually quite happy being unapologetic about it. In an alternate universe, we probably pay our homage at the Cathedral of Science, with theoretical physicists presiding over as high priests.

However, in our own version of the cosmos, I am willing to give them the benefit of a fertile imagination, given their knack of coming up with the weirdest explanations for everyday phenomena. Therefore, it is a feast for the intellect when some of the brightest minds of a generation squabble over, quite literally, a dice.

Our classical sense of intuition tells us that in order to produce a change in a system (read ‘object’ if you are less scientifically minded) on the order side of a football field we will have to somehow negotiate the intervening space. That is what space does. We can shout, send a laser beam, or mail a postcard and wait for the cows to come home. Physicists and philosophers have a word for such a world view—local realism. Local realism posits that an objective reality exists even when it is not being observed and that an object can be influenced only by its immediate surroundings. It’s like what Winston Smith of 1984 would have us believe—“Sanity is not statistical”. Until the first two decades of the 20th century, no scientific development had challenged the locality of our universe. But all this was about to change. The science of quantum mechanics, developed primarily during the period between 1900 and 1930, breaks away completely with the tradition of a local, deterministic universe. It claims that one can not even know with certainty the position or velocity of a single particle, leave alone the evolution of the entire cosmos. Not only that, quantum mechanics stipulates that prior to the act of measurement or observation, there is no point in even talking about such physical quantities. An electron could be here, in Andromeda Galaxy, or everywhere. Its behaviour can only be described by a fuzzy haze of probabilities, with no outcome being absolutely certain. Period. While relativity is counter-intuitive at best, quantum mechanics is downright bizarre and malicious. It shatters our personal, individual conception of reality. God, it would seem, does like to play dice with the universe. And he rolls them blindfolded.

In order to interpret the physical properties of the micro-cosmos, quantum mechanics uses a construct known as the ‘probability wave’. For example, if we are trying to study the position of an electron, the size of a wave at a given point in space is proportional to the probability that the electron is located at that point. But before the experiment is carried out and once it’s over, there is no way to determine for sure where it’ll be found. Identical experiments, performed under identical conditions, yield different results which agree with the probability profile of the electron’s probability wave. But is this wave thingamajig something real or just a convenient mathematical model that embodies all that we know and observe about the fundamental particles? Does quantum uncertainty tell us at that any moment particles simply do not possess a definite position?

This deconstruction of reality does not stop here. Quantum mechanics predicts the existence of ‘entangled’ particles that exist in a nebulous haze of uncertainty until one of them is forced to snap out of it when appropriately measured or interacted with. The outcome attained by any one of them is mirrored by each of the other entangled particles instantaneously, irrespective of the amount of space that separates them. If one decides to sport a pair of Ray Ban sunglasses, all the other entangled particles will choose to do so. They could be in two different corners of a room or at opposite ends of a galaxy—it doesn’t matter. This is dark magic or voodoo at its very best!

Naturally, this attack on the fundamental nature of reality did not sit well with Einstein. Over the course of many years, he mounted a series of ever more sophisticated challenges aimed at exposing the lacunae in quantum theory. He once reportedly said, “Do you really believe that the moon is not unless we are looking at it?” The stalwarts of quantum mechanics were obviously not amused. So Einstein sought to provide a physical argument for this philosophical conundrum. In 1935, he published a paper with two of associates at Princeton—Podolsky and Rosen—which provided a theoretical basis for what has come to be known as the E.P.R. Paradox. Using Heisenberg’s Uncertainty Principle, the authors argued that quantum mechanics could not be a complete description of the physical reality and that a more fundamental theory is needed to understand it. For instance, it was argued ‘entangled’ particles displayed correlated properties simply because they had ‘hidden variables’ that programmed them to do so. Somewhat similar to two machines coming up with identical results even though they might be separated by a vast distance. For several years the issue of who was right was left unresolved. Then in the 1960s, the Irish physicist John Bell showed that the debate could be settled experimentally. First in the late 1980s and then later on through a series of progressively refined experiments, it has been proven conclusively that ‘spooky’ connections do exist between particles that defy our conventional notion of existence. What happens in Vegas doesn’t just stay there. Something like this should take your breath away! It affirms that a local universe may exist in our mind, but not in reality. What if our universe was nothing but a mirror image of an infinite number of entangled universes? As it is so poetically depicted in the movie Another Earth, is there the possibility that duplicate copies of our ‘selves’ exist? Would then our choices mirror theirs?

The world according to the quantum is a strange place indeed. It forces us to abandon the idea of a local universe. It also throws out of the window the notion of an objective reality—one that has always existed. The act of observation, therefore, becomes closely intertwined with the process of creating the very reality that is being observed. In effect, this theory is incredibly efficient: it explains what you observe with mind-boggling accuracy but prevents you from seeing the explanation. And therein lays the problem of reconciling our day to day experience of life with the weird microscopic reality revealed to us by quantum mechanics. Wasn’t life complicated enough to begin with?

Our society is structured according to the way we understand reality. Our definitions of truth, free will, justice are intricately tied to this understanding. To undermine its importance in the context of our own lives is to be deliberately short-sighted. And to ignore its implication, a fool’s paradise. So is that it? Is our reality merely a game of chance? Is Schrödinger’s cat really alive and dead at the same time? In my next article, I will try to dwell upon the different interpretations of quantum mechanics and what promises they hold for our understanding of that most elusive of phantoms—reality.

[Click here to download a paper (312kb; PDF) about the E.P.R. Paradox in case you are interested in the details of this argument. It is not very long and Einstein’s grouse with quantum mechanics has been expressed very succinctly. Just ignore all the mathematics and concentrate on the parts mentioned on pages one and four.]

‘Roads to Reality’ is a series of articles that looks at how our understanding of reality has changed in light of modern advancements in science, particularly in the area of quantum mechanics.
Siddhartha is a student and a writer, and someone whose solution to the entire world’s—and his own—problems is a cot, a mattress, a blanket, and silence.
Filed Under: columns, quantum physics, reality, roads to reality
Tweet 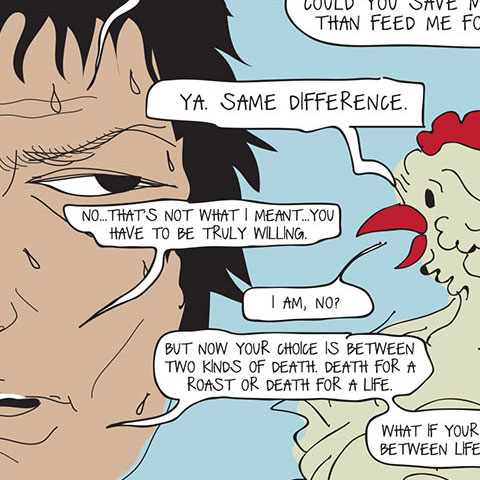