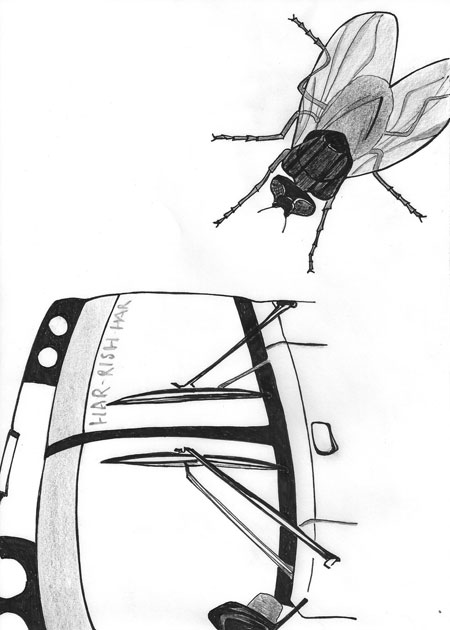 Possibly the best part of our trip to Haridwar was the beginning. We had missed breakfast on our way there—if you don’t count cucumbers spliced open with chillies and salt inside. So while we were on the main street walking past curio stores and lamp sellers we asked a friendly bookshop owner where he would go for lunch.

He directed us towards an unassuming doorway we might otherwise have missed, telling us to go upstairs and ask for the full lunch. The waiter nodded when we told him the bookseller’s name. He lingered for no further instruction, taking away our menus before we could look at them and then serving up a three-course meal that left us lolling back in our seats. It was clean, colorful, fresh, and delicious, and ended with a plate of hot, sticky jalebi. Thus revived, we went back to the bookseller and bought some illustrated fables that he extracted from a tottering pile of hardbacks. We also bought some incense and a small stone lamp. We then moved cheerily on towards the cable cars that were to take us to the two hill-top temples we were told we must see. Fly and bus. Illustration by ANJA.

That is my last good memory of that day.

The queues for the cable car had to fit into a small waiting area, and so they folded upon themselves in neat but endless rows. For all the waiting, the ride was short and delivered us straight to the bottom of the next set of queues for the temple itself—impossible squiggles full of irate pilgrims and their bored and consequently loud and slippery children. Inching along for what felt like hours, we were finally allowed a second in front of the idol before we were moved along. I saw a pair of eyes above a silk sari and that was about it. Hot and sweaty and tired of being pushed around we decided to give the second temple a miss and go down to the famous ghats instead.

This is where all the pictures of Haridwar are taken—the famous stone-paved riverbanks lined with temples whose bells ring out in unison at sunset.

It could have been a fairground. The kind where the kids are screaming because they can; running around in circles with a squeaky toy or balloon in their hands. Where the parents and grandparents, glad for a break, spread out on the ground in expanding circles of family and friends to exchange world news and packed lunches.

It was late in the afternoon. A shifting blanket of buzzing flies covered anything that stood still for a moment. The waters were brown, as though the rains had washed entire muddy slopes away—except that there had been no rains. The ground was grimy and littered. Rows of evidently recycled plastic bottles filled with liquids of dubious origin fronted the restaurants. Inside, samosas and pakoras came out of frying pans dripping oil several weeks old. Little flower boys and girls sat by baskets of clay lamps and bright blooms that one bought to float downstream in tribute to the river and to dead ancestors. Vendors walked about with giant reflectors in one hand and rolls of wrapping paper in the other. These, on closer inspection were not reflectors at all but the shiny silver undersides of sheets of chocolate wrappers, stuck together to make rectangular mats in an ingenious response to market demand for anything remotely clean to sit on.

There was a museum not far away that we had planned to skip so as to spend the evening by the water. In less than five minutes we were in a large share-rickshaw and on our way. We could spend a couple of hours there and come back for the highlight of the day, the evening arati. We reached in no time at all and bought tokens to go through floor upon floor of an astonishingly large collection of costumed dolls. It was a neat display of figures from assorted mythologies, histories, and politics of India. It was also welcome respite.

We made it back just in time. The main temple in the centre of the ghat began its arati—and on cue all the temples flanking it on either side lit up their salvers of camphor one after the other. It was a row of circling flames along the riverbank at dusk, illuminating clouds of incense and chanting pilgrims, while the waters carried petal-covered clay lamps beyond sight. For a moment, the postcards came to life.

But it didn’t convince us to stay the night. Right after the arati we flagged down a rickshaw and made our way to the bus stand. Since Rishikesh was less than an hour away it felt like an accessible haven. We knew which hotel to go to now and where to eat. We were leaving Haridwar feeling more filthy, exhausted, hungry and cranky than we had been all summer.

To be fair, we hadn’t really seen much of the city. Other far happier travellers’s tales talk of the temples we didn’t go to, the views of the hills in the distance and the freshness of the water after the first thaw. But we had chosen a humdinger of a day—relentlessly hot, crowded, and bug-infested, with no sign of the famous cool clear waters for succour. Besides, Rishikesh had spoiled us for anything else. These two towns are like fraternal twins; they bear no remarkable resemblance to each other. For all that they are thrown together by devotees and travel brochures, they could not be more different. We clearly had a favourite.

At the bus stop M went to make some calls. As I waited on a bench outside a backpacker came up to me and asked where the nearest clean, affordable hotel was. I told him about the hotel we had planned to stay at, had we stayed. Then I added that I was not staying the night, that I was getting on a bus that took me to Rishikesh and that after a couple of hours here he might want to catch a red bus with Har-Rish-Har written on the windshield in blue paint. M came out of the phone booth just in time to hear the last bit and see the confused backpacker turn away. ‘Did you have to? He might see the whole place differently—love it, even.’ ‘Yes he might,’ I snapped, ‘but after a few hours he might want to escape and then he will be glad he knows where to find the right bus.’