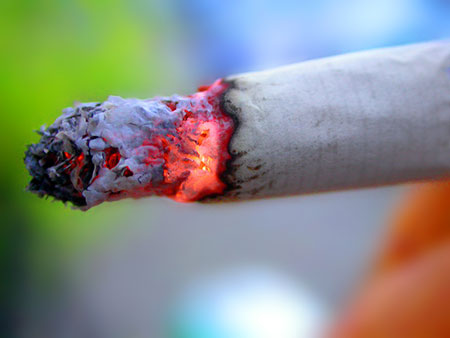 Live from the Console: Fifth Edition

The Cigarettewalla’s shack is strategically set up outside the entrance to the famed Kolkata U.P. Chats and Parantha Centre—satiated patrons always stop for a taste of gutkha, paan, or the ever-faithful Gold Flake on their way out and provide good business.

It had been recently upgraded from a small wooden table with a multitude of drawers to a swanky cubicle-like structure, generously provided for by I.T.C., the Indian tobacco giant (the catch being it must only be used to sell I.T.C. products). In the white light of the environment-friendly fluorescent lamp, the Cigarettewalla’s nearly bald head gleams invitingly while the silver and maroon colours of his little kingdom allay my fears as far as the much publicised and the little heeded harmful effects of smoking are concerned. Were it not for the fact that his wares were displayed a little too conspicuously, I would have easily mistaken him for an insurance salesman. In business for so many years now that he cannot remember when he started off. Photograph from Flickr.

Ever since I had started taking my meals in the campus mess, my visits to the Cigarettewalla had dwindled to a bare minimum—another shack closer to the hostel provided for all my needs. Being a lazy lump of lard, I conveniently concluded that he wouldn’t mind and that all would be forgiven and forgotten. But when Gyaan, the chubby proprietor at Kolkata U.P., told me one day that he had not shown up for work for nearly a month, I thought it wise to enquire about this mysterious absence. The Cigarettewalla is smoking a Kings and looks a tad upset. His forehead is lined with some new creases. Or maybe I am just imagining things.

My Cigarettewalla has been in business for so many years now that he cannot remember when he started off. He had dropped out of school to provide for his family and things had never been the same again. He tells me he is pushing 60 but I could swear he looks older. He is a cheerful person who does not mind teaching me the Kannada numerals and holds not a lot many grudges against life. He is one of the few people I have met who seem educated without being literate. One fine afternoon, I was digging into a less than decent meal at the aforementioned Kolkata U.P. when I was accosted by him.

I like to have my meals in silence and solitude, partly the reason why I chose to have them in this run-down diner where dal often competed with water for consistency. But when a 70-inch TV is being discussed with such earnestness, one is bound to take notice. So I stop eating, look at him politely, and convey my ineptitude in the matter through a handful of words.

“Pata nahin Uncle, I have never seen anything on either of them. I grew up watching Cartoon Network on an old-fashioned T.V. You know, the 21-inch kind. Even our new T.V. is old-fashioned,” I smiled a little at my own smartness. But Uncle was not perturbed.

“But you are educated and a student. You must know something about these things. You have to help me. I am going out today to buy a new T.V. and I want no expense spared.”

“If you have the money, Uncle, I am sure the salesman will do his best to get you to buy the costliest one. Just don’t get fooled and make sure the prices don’t vary across stores. Get the best deal possible, whatever kind you decide to buy. Why would you want to buy a 70-inch T.V., anyway?”

“I want it for one of the walls in my house. One whole wall for the T.V.! Wife will like it. Besides, what am I going to do with all this money? I have no kids and it is not going to stay with me after I die.”

It was quite obvious that he was very excited and nothing that I could say would dissuade him from splurging on the electronic monstrosity.

“No. It’s just me and wife. I have been thinking about selling the shop, you know, and then living on the money that I have saved. But you must help me. Plasma or L.C.D.? Which one is better?”

I walk up to the counter, smiling, and place my usual order. He smiles briefly at me and then hands me the cigarettes. There is a marked tension in his movements—he falters while making a paan for another customer. His half-smoked and completely forgotten cigarette is scarring the bright shiny counter. The bananas are too ripe and have begun to give off a stench. I fumble around for words.

“It’s the wife. She has been sick again. Her leg has swelled up and doctors can’t seem to find what’s wrong. They say it is some sort of bacterial infection.”

“Swollen legs? Is she in a hospital?”

“Obviously. She is at St. John’s, undergoing treatment. She’s even had an operation where they removed a chunk of her leg this big,” he tells me while showing me how big that chunk was.

“So she must be better now, no? An operation usually solves all problems.”

“Nothing like that. The swelling is still there. Those idiots don’t seem to know what they’re doing. All they do is keep selling me injections everyday. Honestly, I am quite tired of it. The money… well, I don’t care about the money. But she is not getting well, either, and the expenses are only mounting. One lakh rupees gone. Just like that. Everyday I have to take the bus to Madivala. The shop has been closed for a month now. There is nobody to watch it for me. Where am I going to find the money?”

“I am sure she will be alright soon. These things take time. The people treating her are not fools.”

“I am not so sure anymore. This is the second time this is happening. She has had a swelling earlier and they discharged her then saying she was fine. And now this. Those injections are killing me. What is a poor uneducated man to make of all this? When I ask them what’s wrong, they just assume I won’t understand. I am not stupid. Only yesterday, there was this young…”

He goes on and on about a poor man’s woes in a rich man’s world. After several minutes, I begin shuffling my feet and make a move to leave. But he starts talking again and I have to stop. Perhaps, he just needs a shoulder to cry on. I am feeling a little uncomfortable. I have just come to buy milk, after all. Now the tragedy in this story is starting to get to me. Besides, I have to watch that movie I downloaded. What was its name now?

Run with the Wolves