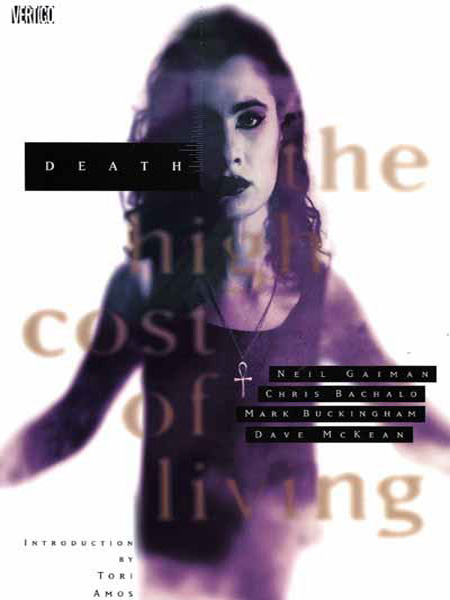 “… waking dreams are of the power and the glory. And of death, of course. Especially death.”—The Sandman, Sleep of the Just.

Long, long ago, in a realm far, far away, lived a girl who was one of the seven Endless. For one day, once in every hundred years, she assumed human form, to walk amongst mortals, to feel the essence of mortality.

Closer home, there is Sexton Furnival: bored, cynical, and 16 years old, with a death wish. The two meet. Oh yes, they do. Him, lost and lonely, and her, caring and compassionate. With the passing hours, they are slowly drawn towards each other. The chemisty between them is so intense that it leaves a trail of goosebumps. They fall in love amidst a flurry of rainbows and bunnies, have rampant sex, make tonnes of babies, and live happily ever after.

Puts Twilight to shame, doesn’t it?

And that is perhaps the only reason why Neil Gaiman, and not anyone else, wrote Death: The High Cost of Living. Death’s daylong sabbatical on Earth as the goth Didi is perhaps one instance that will make you love Death more than you already do. Chris Bachalo and Mark Buckingham’s artwork make her look even better than ever.

The book is not entirely about glorifying Death and beautifying her already beautiful existence. It is about realising how Death is kind, compassionate, loyal, and brave. Her encounter with Sexton, who is contemplating suicide, is one of the instances which will make you smile at Didi: beautiful, young, and blessed with the wisdom of one of the Endless.

Sandman lovers, you are in for a pleasant surprise in the form of Mad Hettie, who turns up and sends Didi off to find her heart. Not too difficult for the one who hid it. Right? Turns out, Goth Girl has forgotten where she’s hidden it! Coupled with the urgency Eremite feels to be in possession of the Ankh Death wears around her neck, an adventure begins. An adventure you could die for.

Admittedly, the chemistry between Sexton and Didi is great. But it is definitely no high school romance. Neither is it intense enough to burn your eyes right off. What it is, is cute. Tossing a doll around, they ease into conversation and into a zone of comfort that is rather difficult for two near-strangers to achieve.

I won’t be biased about Gaiman and Death and try to convince everyone that the book is brilliant. It isn’t. Personally, I would have liked to see more of Eremite, but Gaiman obviously thought otherwise. The blind wizard’s need to possess the amulet and his attempts to get to it makes the reader realise that there is much more to this crazed chase—but we never get the answers we want.

The impeccable artwork makes this book live up to its hype. Apart from being the best depiction of Death ever, it also makes everything seem much more believable and appealing.

Those who already like her will love her. And those very few souls who have refrained from loving her, will realise what they have missed out on. A good read. But not for more than once.