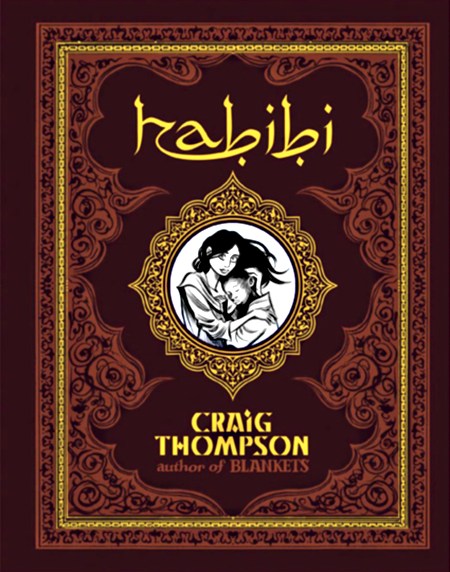 A few weeks ago, on the eve of turning 26, I spent a whole weekend gawking at the incredible artwork that unfolded in front of me. Whoever first said never judge a book by its cover had obviously not come across Craig Thompson’s masterpiece Habibi.

Such is its brilliance that I am still at a loss for words. Sure, I’ve been recommending the book to all and sundry, but when I am asked why, I’m not sure exactly where to start, for that matter, how to start. Habibi, as the name suggests, is a story of love. Set in the Middle East, it is perhaps the clever choice of place and time that allows Thompson to go mad with his obsessive sketching: elaborately inked pages, aesthetically pleasing faces, and gorgeous sights—that is the essence of Habibi. Until you get around to reading the story, that is—and an exceptional story it is.

When you set out to read a story of love, you almost can anticipate the ‘happily ever after’ that is to follow. But not in these pages. When two young orphans run away from a life of slavery, you can hear your brain scream out: “Stop reading! It’s Blue Lagoon in a desert!” But Thompson’s artwork, thankfully, keeps you engaged and ensures that you won’t be disappointed.

So vast and elaborate is the world of Habibi that writing 500-odd words about it doesn’t seem to do it any justice. Sure, my never-ending Bible Studies classes all came back to me (the Qur’anic versions of the Biblical stories are so much win!), and sure, the liberal atheist in me grimaced at the recurring element of damnation, but somehow that didn’t really matter.

By means of a tumultuous journey through deserts, harems, brothels, and the slowly seeping modernity, Habibi narrates the story of two young souls, Dodola and Zam. Brought together by destiny, the reader plays voyeur as they are built, wrecked, and built again, and again, and again. The stories are woven out by beautifully formed images inspired by Christianity, Islam, good, evil, eternity, eternal damnation, and of course, sexuality.

The element of the forbidden that laces the steps taken by both Dodola and Zam makes it not just exquisite, but deliciously appealing as well. What I don’t like about Habibi is perhaps the confusion that it displays around morality and sexuality, which is a little hard to ignore. At times, they intermingle to form a stream of consciousness that judges severely, and at other times, they adopt Thompson’s stream of thought and break into torrential lust. Quick shifts of emotion from tenderness to self-hatred is something that made me frown, thinking of the paths both Dodola and Zam had chosen for themselves. “The struggle against oneself” was evidently a fight (defined by castration, angst, and rape) that was meant to be lost.

Heartbreaking in a way only sheer beauty can be, Habibi is a celebration: of love, lust, and the human need for company—more specifically, the need for a companion who can love and be loved with exactly the same intensity.