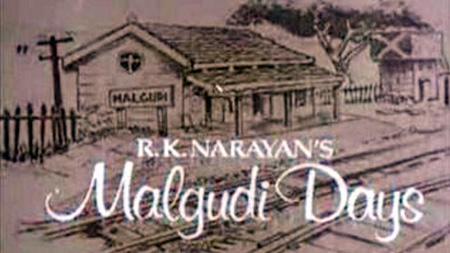 A few years ago, I read a book by Shashi Tharoor called Bookless in Baghdad. It’s a collection of literary columns, articles, and reviews by Tharoor and one of the essays is practically an excoriation of R. K. Narayan.

Okay, so I go a little far in describing it as an excoriation, but he did write some sharp criticism of the revered writer. Among other things, he called his vision “narrow” and “limited”. There was some comparison to Jane Austen, and it wasn’t favourable. According to Tharoor, “Like Austen, (Narayan’s) fiction was restricted to the concerns of a small society portrayed with precision and empathy; unlike Austen, his prose could not elevate those concerns beyond the ordinariness of its subjects.” Other criticisms included Narayan’s use of the simplest language, archaisms, banalities and clichés. I will admit that I was initially swayed by Tharoor’s argument. I was just starting out as a writer back then and I was very impressionable. And anyway, there was something almost swashbuckling about going against the tide of popular opinion which held that Narayan was a genius non pareil. To an extent, I still agree with Tharoor. I don’t delight in Narayan’s sentences, and no new word shines out at me. As a writer then, for me, he fails in one major aspect.

But I can’t deny the basic attraction of his stories. It is in his role as a storyteller that Narayan really shines. What makes his magic work even today? The stories are old, but they still resonate with everyone: many people I know swear by the Narayan stories they read as kids and even now, they like to revisit some of their favourites. Many also have fond memories of the television adaptation of Narayan’s Malgudi stories called Malgudi Days—the beautiful show by Shankar Nag, which so faithfully reproduced Malgudi as envisioned by Narayan. Part of our fondness for the show could be triggered by nostalgia; we are probably the last generation of urban kids that remembers watching Doordarshan shows like Malgudi Days, Byomkesh Bakshi, and Flop Show. And we recall them with great fondness.

Nostalgia is probably a huge part of the attraction not just because these are stories and characters that we are familiar with. They remind us of our childhoods, which, with the benefit of hindsight, we view as having been relatively free of the complications that mar our adult lives. If there was ever a fight, it was most likely because someone cheated at a game or refused to share his or her toy—much like Swami and his friends. Again, much like Swami, many of us grew up with loving grandparents telling us stories in houses where much of the pickle and papad stock was homemade. Watching Malgudi Days today only shows us what a long way we have come from the fun and games, and through Swami, we can live those relatively carefree days once again.

That of course, is the romantic view. But I think it goes much deeper than that. I recently re-watched the old Doordarshan series and that prompted me to take a look again at the few R. K. Narayan stories that I had read. They are still very compelling. There’s nothing earth-shattering about the plots: no magic, no strange dimensions, and no sign of anything meta happening. But the stories have heart. The adventures of Swami and his family and friends, the typical troubles that crop up in their little town, these may not give us much insight into the Great Big Troubles of the World, but they do give us a peek into human nature. The small town troubles of Malgudi might resolve with great ease by the end of each episode, but that doesn’t mean that they don’t absorb us while they last. Whether it is a missing child or a stolen necklace, we watch in the comfortable knowledge that everything will be alright in the end, even though we do commiserate with the simple folk who deal with these problems.

And then there is the beautiful, evocative music of Malgudi Days and the simplicity of the sets and costumes. One shudders to think what would happen if the show were re-made for television today. It would most likely be on S.A.B. T.V. (which successfully butchered R. K. Laxman’s immortal cartoons) with the costumes and sets done up using every shade in the rainbow. The charm of the original show is something we appreciate even more now, when most television content is so much horse manure. I won’t simplify this whole thing by saying that Malgudi Days was a show made in less complicated times, but it wouldn’t be wrong to point out that Indian television back then, though trying to make money, still had some commitment to telling good stories. There were no film tie-ups, the actors were good and the writers were treated like actual human beings who needed space and time to do their jobs. And that is what makes Malgudi Days such a treat to watch even today.