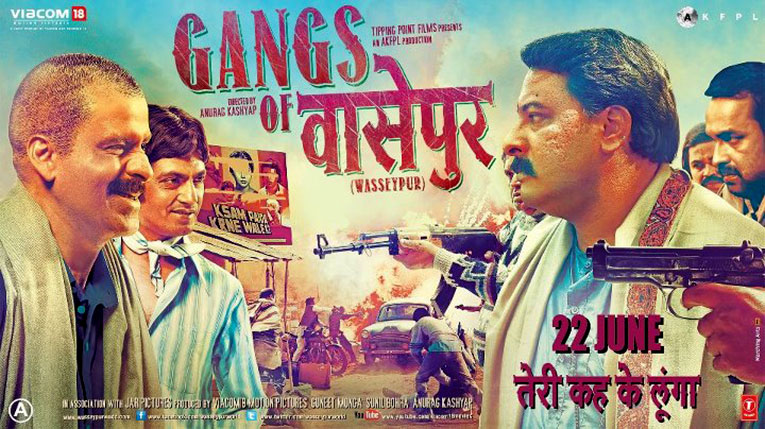 Book Review: The Edge of Desire

Anurag Kashyap’s Gangs of Wasseypur is a powerful announcement of the man’s vision for making movies with heart and with humour.

Replete with profanity, lechery, drugs, and dirty secrets, Gangs of Wasseypur is one of the most bad-ass movies ever to hit the 70mm in India. While the storyline dances around a deadly quest for revenge in Bihar, the plethora of perspectives employed by the director leaves the audience a little baffled and a whole lot entertained. Having seen all of Kashyap’s past work, this film leaves a little to be desired. The storyline begins around a Ruhr-valley like division of coal mines in India around the time of independence and while the plot is one that grips the viewer tightly, and the perpetual “M.C.B.C./Bhosadike” chants keep the audience laughing along, the sheer magnitude of the director’s imagination thrown up on screen makes Gangs of Wasseypur slightly scary to watch and a little tedious to keep up with.

The first half of the film is breezy and by the time we get into protagonist Manoj Bajpai’s story of cold, cold revenge, the clear signs of an impending bloodbath keep you on the edge of your seat. We see Sardar Khan, Bajpai’s character, gasp for air and space from his family drama and find himself an out-of-home ‘Durga’ (Reema Sen) to romp with while his own wife (Richa Chaddha) is pregnant: the religious undertones and the sexual overtures throughout the film keep the masala on the boil.

The first half of the film depicts the nepotism and treachery that went into the division of the coal mines in Bihar and other mineral rich areas between the Damodar and Ganga rivers. The story of Sultana Daku, the missing-in-action dacoit, spins a yarn long and thick as Jaideep Ahlawat steals the show. The unconventionally structured timeline that is used for the narrative keeps the audience guessing as to what happens next, with all the characters etched out in detail. The music is entertaining and there are more than a few songs that might become auto-rickshaw ear worms.

The film is a rollercoaster that gets hard to follow after a while, even though the second half keeps you held in rapt attention. The effort that went into crafting a believable storyline that dates back to India’s independence is evident, and the film delivers a punch through its tight screenplay. But there are many downsides to the film: the dearth of a strong singular character pulling the action through, the introduction of too many characters and a convoluted plot that requires careful attention. Despite these, audiences seem to love the film and their word is final. Anurag Kashyap delivers another gem for Indian cinema to marvel at. Gangs of Wasseypur deserves multiple viewings because of the sheer scale that it aims to portray on screen. And as an additional Easter Egg, if you stay back long enough after the credits roll, the trailer to the second installment of the films leaves you wondering about where it really ends.

For the violence, guts, gore, and glory, Gangs of Wasseypur, part one, is a definite
must-watch.

Book Review: The Edge of Desire