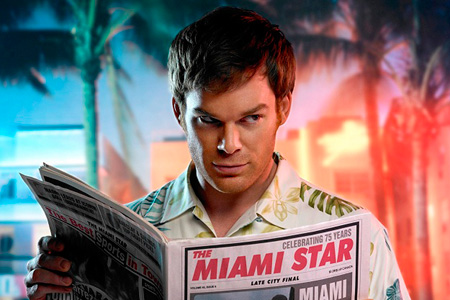 Is there anything I can say about Dexter Morgan that hasn’t already been said before? That he represents the darkness that resides in all of us, and that he embodies the rage we all feel when we see or hear of people doing heinous things. As a sociopath who kills murderers—people who deserve it, in other words—Dexter is acting out some of our darkest fantasies. One of the things I learnt from watching crime shows—and reading accounts about Elizabeth Bathory, Ted Bundy, Jeffrey Dahmer, and others—is that serial killers show no remorse. They kill because they feel an almost pathological compulsion to do so, and they relish it. Most of their killings follow a logic that only their warped minds can comprehend: what we see as a grotesque ritual, is for them a compulsive pattern which they must follow in order to achieve the fulfilment they’re looking for. Some of them possess great personal charm which they use, like Venus Flytraps, to lure
their victims.

Dexter is a textbook serial killer: his sociopathic tendencies were born out of a childhood trauma, he started out torturing animals and graduated to human beings, the ritual for him is as important as the killing, and he’s only acting like he belongs with the rest of us. And yet, we actually like him. Why?

The obvious reason is the most important one: he only kills bad guys. We are never rooting for any of Dexter’s victims, since they’re all sadists or rapists or killers. But here’s the thing to remember. Dexter doesn’t kill for justice. He kills because he has to, needs to. He would kill regular people, anyone who annoyed him even a little bit; or he would kill vulnerable people like migrant labourers and prostitutes because mostly, no one cares if they go missing. He would, probably, leave his kill out for everyone to find and he would leave it a mess of blood, hair and body parts. But he doesn’t do any of these things because of the Code taught to him by his foster father, Harry. In other words, the only reason Dexter kills bad people and disposes of them neatly, is because he follows the Code and he only does that so that he won’t get caught. It’s pure survival tactics.

Another great asset Dexter possesses is his face. Not only does he look normal, he actually looks pretty good. He’s got a great gift for repartee and he is also a wonderful listener (we know the latter is only part of his study of How to Be Human). And there is the fact that he never, ever hurts children. He actually likes them. This was stated right in the first episode when he abducted a child rapist and killer. It makes it easier for us to think of Dexter and his little ‘hobby’ without the bile rising. Humbert Humbert? Not so much. He may not have killed Lolita, but he did rape her. The much-awaited seventh season of Dexter premieres on September 30, 2012.

In fact, the easy relations that Dexter seems to share with others on the T.V. show go a long way in assuring us, the viewers, that he is worthy of our esteem. They all like him, so why shouldn’t we? Sergeant Doakes was the only one who ever disliked Dexter, but then he was a total jerk. Right?

These are the many things that the T.V. show does to manipulate us into feeling instant sympathy for a sociopath. They show us immediately who he really is, but they add a twist later when they show us he has a regular well-paying job, friends, a loving sister, and a girlfriend with whose kids he gets on fabulously well. He seems so well-adjusted.

However, if you have read the novel Darkly Dreaming Dexter by Jeff Lindsay, on which the T.V. show is based, you will probably, like me, find it much harder to sympathise with Dexter. The reader is not instantly on Dexter’s side. One reason, of course, is that we can’t see him. We don’t know what he looks like. And then, the whole book is entirely from Dexter’s perspective: there’s very little room for other characters to grow, unlike the show. Because characters like Deborah and Rita are so fully realised on the T.V. show, their more fully-realised relationships with Dexter help us sympathise with him more. Also, Dexter’s traumatic childhood event is played up a lot more than in the book. But the biggest reason book Dexter is a little less likeable than T.V. Dexter? He lets his murderous brother live.

It goes against everything we’ve been conditioning into believing about Dexter. We believe that he’s ‘taking out the garbage’. And yet, he lets his brother go. And what’s more, in the book, Dexter is a lot more conflicted about killing Deborah than on the show. In the latter, it’s a matter of seconds before he attacks his brother, Brian Moser. In the book, he agonises for many minutes before he finally says that he can’t kill Deb. On top of that, he lets Brian live and even lets him slice up LaGuerta. There are no signs of Brian having been cured of his sociopathic disorder, so who knows how many more women he ended up killing. And unlike everything we fooled ourselves into believing, it was not Dexter’s job to stop him. Dexter has no such job: he only has one compulsion and that is to kill people. He lets Brian go partly because he is his biological brother, and partly because he does so admire his work as a killer.

This is not to say that T.V.’s Dexter isn’t great. I’m a fan, as are millions of others. The slow blossoming of a ‘monster’ into a human being has been wonderful to watch. It hasn’t all been cherry pie: there have been betrayals, disappointments, and lots of pain. But it’s nice to see that the person we sympathised with immediately deserves a little more of
our love.