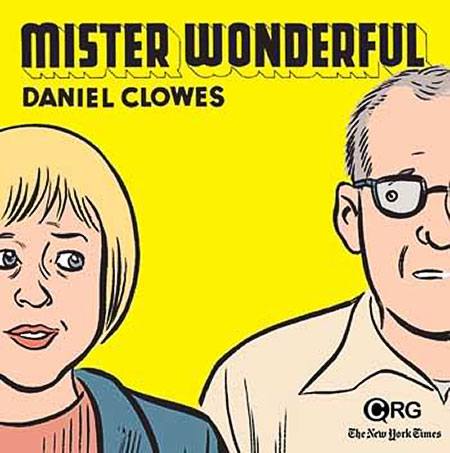 When you’re almost halfway there, the thought of hitting middle age haunts you like nothing else. And two days into the new year, you discover a comic while randomly surfing the Internet, trying to deal with a strange combination of boredom and stress and feelings that make you realise that you are indeed growing older (if not wiser), crankier, and less patient.

You think of all the ones who have ‘cheated’ you. Out of ideas, work, feelings, and energy, and you think of murder, in not very subtle ways. But you lean back, and try to be nice to your mind, more than anything else, and you read the comic, trying to ignore disapproving glances of seniors who obviously don’t understand the sheer brilliance of comics. As luck would have it, you end up reading this comic about a 30-something-year-old and the crises he faces in life. And you sniggle—a rather undignified cross between a snort and giggle—and you continue reading what you thought was rather unimpressive graphic novel a few seconds ago.

History narrated, it is time to get working and picking apart Mister Wonderful, an Eisner Award-winning graphic novel which is unsurprisingly underrated in India. It is about a middle-aged, unemployed, broke divorcee. It is not about caped crusaders and masked macho men. It has no legends to boast of and it has no rush of adrenalin pumping action through epic artwork. And yet it is appealing.

Set up for a blind date by a couple of friends, Yuki and Ted, unobvious little Marshall waits patiently at a café, waiting for the lady to arrive. During the inevitably long wait, he muses over his failed relationships, both social and romantic. With the arrival of Natalie, the reader actually smiles at the saccharine gesture of Marshall holding in an irresistible urge to pee because he doesn’t want to leave her a chance to escape. With the progress of the novel, I couldn’t help but realise how Woody Allen-esque our protagonist is. Starting from the thick-rimmed glasses to the moments of self-doubt and the ability to add elements of comedy to a first date scenario, which in no way is an original thought developed. Originally published as an ongoing series in the New York Times Magazine, this close-to-reality novel about a middle-aged man looking for love is refreshing for a mind laden with superheroes and their superpowers.

The fun ride through the one date and the downs, more than the ups, is what makes this worth the read. Written by Daniel Clowes, the novel is an easy, interesting read. It is perhaps the inclusion of monologues and disjointed dialogue that adds to the charm, or it could be the plain fact that it is about two psychologically scratched people with deep-seated issues, anxiety, regret, and lies to deal with.

The artist in Clowes is perhaps at his best as he exploits every inch of the panels to bring out the best, the worst, and the unbelievable. The representation of Marshall’s superego, the clever play with text boxes and word balloons and flashbacks in tints of rust all add up to a good read. Not a book I would read too many times, but definitely a book I would want everyone to read at least once. Perhaps just to feel better about themselves or perhaps, to realise that they are not the only lonely ones.

Fantastic Beasts and Where to Find Them