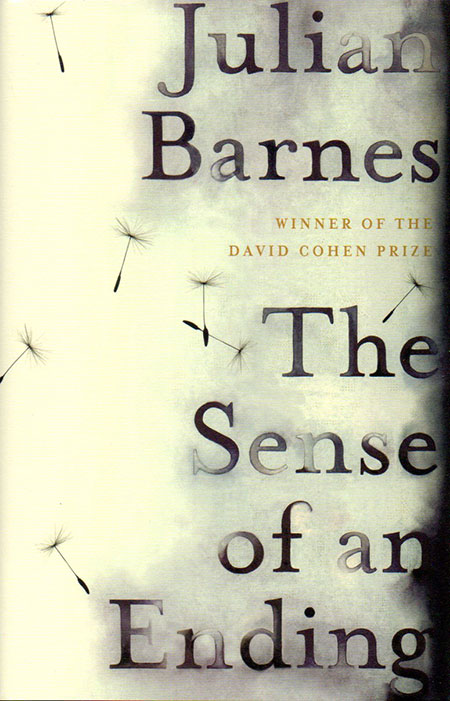 Julian Barnes has done it again, and this time, he’s done it well. The Sense of an Ending is a must-read for three primary reasons: one, to appreciate the fact that the shortness of a novel does not essentially mean a shallow read; two, to discover the depths of memory and our own missed opportunities; three, to understand how not to end a novel. In fact, after you read this book, you’ll want to rename it The Nonsense of an Ending. The Sense of an Ending book cover.

The highlight of this 2011 Man Booker Prize winner is its focus on the Theory of Damage. The non-reliability of human memory, its tickling subjectivity, and its passage through the crevices of human whims are the three things worth looking out for in this book. Barnes, as in his previous books, has dealt with very complicated emotions, which are clothed in brilliantly simple words. Sentences are short; pages are few. Other authors like Milan Kundera have dealt with the aspect of memory in their books, but what makes this book different is its narration in the first person, which makes the experience of the vagaries of memory more stark and personal.

The plot seems simple enough—Tony Webster, who I would describe as abnormally average at everything he does and everything he is, along with two of his friends, befriend a newcomer at school named Adrian Finn. Adrian is an innate ‘philosopher’. An avid reader, a strikingly mature boy, and a prophet! Some instances in the book make this clear. When asked by the teacher “What is history?”, while Tony gives the relatively pat answer “History is the lies of the victors,” Adrian replies with a more profound and contemplative “History is that certainty produced at the point where the imperfections of memory meet the inadequacies of documentation.”

I shall not divulge any important details, but let’s just say that this point rings wholly true towards the end of the book. As Tony goes to college, he meets Veronica Ford, meets her parents, introduces her to his friends… and breaks up with her. Adrian then goes out with Veronica, and soon after kills himself (the mystery shrouded on the reason for this suicide persists till the very end of the novel—only to disappoint the reader with a somewhat jarring ending). Meanwhile, Tony has his own life to deal with—his marriage, his divorce, his daughter, his work, etc. The story actually starts with the death of Sarah Ford, Veronica’s mother, and Finn’s diary being bequeathed to Tony as a part of her will. Why is Finn’s diary with Mrs. Ford? Well, read the book for the answer.

Tony struggles to keep his memories intact and to extract any hint whatsoever to help him understand the present situation. Veronica’s stout refusal to part with Finn’s diary, two pages torn from Finn’s diary which contain an equation, and her sheer evasiveness and mysterious frustration with Tony make matters more and more complicated.
And then, the ending comes. It comes slowly, with some necessary contemplation, some profound understanding, and massive amounts of contemplation—for, if you don’t invest your mental energies to understand and literally decode the ending, then you just don’t get it. No wonder Veronica Ford keeps asking Tony the same question. “You just don’t get it, do you?” For a minute or two, I almost thought Barnes was poking cruel fun at me!

As far as the division of the book is concerned, it is divided into two parts. The first part is exactly representative of memory. No analysis, no counter-thoughts—sheer nostalgia. The trick here is that when we try to capture past thoughts and memories, more often than not we end up grasping moments. Not memories, but moments. A whole 20-year period can be reduced to 20 minutes of contemplation. Some details strike out, some fade away. Is it the mind working? Well, who’s working the mind? The second part, on the other hand, is more articulate of the present (‘recent’ past, more likely) and hence, more coherent and less patchy. Obviously more detailed, and—hopefully—has a stronger grip on the loose leash of memory.

To conclude, the thought, the language and the philosophy of the book is rather exceptional. The ending could have been better, but still, The Sense of an Ending is highly recommended.