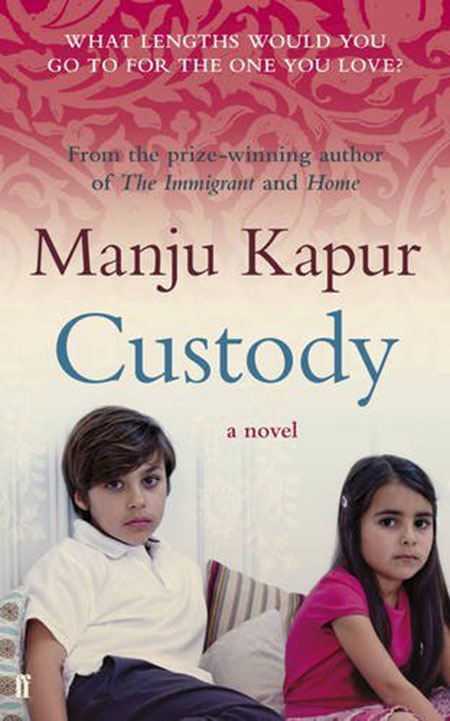 From the writer of the acclaimed Difficult Daughters (1998), comes a new novel that traverses yet another aspect of upper middle class life in Delhi. In Kapur’s new novel, Custody (2011), her readers are led into the world of ugly custody battles in the background of India’s maze of judiciary system.

The narrative takes off with a tryst between two lovers, a married woman and her husband’s boss. Shagun plays the role of a dutiful wife whose boredom of a “perfect marriage” leads her towards the suave Ashok, her husband’s superior. On the other hand, Raman is an unsuspecting husband caught up in his demanding job at a soft drink company, The Brand. And then, there is childless Ishita who craves for motherhood despite her divorce. In this complex web of relationships, lies the nucleus of the story: the children. The narrative revolves around Shagun and Raman, the “perfect” couple, with two “perfect” children, Arjun and Roohi. Their “perfect” life is disrupted one day by Raman’s new boss, Ashok. When out of frustration from the pedestrian perfectness of their marriage, Shagun seeks a fervent relationship with Ashok, Raman’s “perfect” world begins to fall apart. And, along with the cracks and fissures in this perfect world, the world of the children also becomes uncertain, where parental rules become blurry.

In her latest novel, Kapur attempts to explore the complexities that offspring can be put through even as their world as they know it is falling apart all around them. The children are the chess pieces on this board game called divorce, while the parents are the key players making their moves as they see fit. Kapur, through her artful narration, reveals the many facets of human nature, where custody battles become a way of trumping one another in a divorce. In Raman’s case, his refusal to grant Shagun a divorce is Shagun’s excuse for withholding their children from him. The custody war becomes an ugly battle for power between a former couple. In this tug of war, the children are left to fend for themselves.

On both sides of the battlefield, Raman and Shagun try multiple ways of cajoling and bribing their kids into giving into them. In Shagun’s case, she uses Ashok as a substitute father, one who’s “connections” can get Arjun into prestigious schools with histories. Raman, on his turf, tries to buy his children’s affections through expensive gifts and wish fulfillments. As for Ishita, her own frustration with her motherless state attracts her to Raman’s unhappy state, where she hopes to find her own salvation.

Kapur must be applauded for attempting to piece together the complexity of the taboo of divorce and its effects on the ones often caught in the conflict. In her attempt, she manages to succeed to a certain extent. While she gets the petty revenge techniques used by both Shagun and Raman down pat, her narrative fails to focus on the feelings of the children. Both Arjun and Roohi appear as shadow puppets on the fringes of their parental drama, and only gain agency towards the end of the novel. Moreover, the steady spotlight on the constant khit phit between Shagun and Raman tends to become predictable and tedious. The saving grace of the novel is the children’s treatment as commodities by the parents, which is especially disturbing and unnerving. In the end, the reader is driven by a desire to know the children’s fate, although foreshadowing throughout the novel has ways of making the end appear a trifle bit obvious.

In the end, Kapur’s novel is yet another one of her “experiments” where she begins with an interesting stance, but ends with serving the same dish in a different set of cutlery. Despite the slightly better quality of writing than her last novel, The Immigrant (2009), this novel offers nothing more than a summer read which is easily forgotten after the last page. There will be pages you will want to skip through for their monotony. Guaranteed.