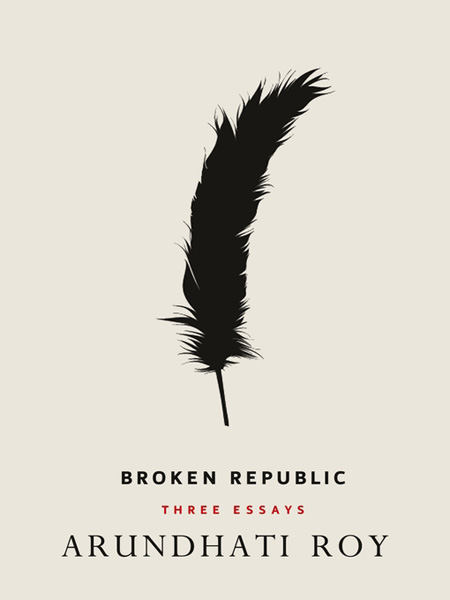 Very rarely does one take the road not taken. Even more rarely does one take such a road in the ‘Red Corridor’ of India. The content of the book is one thing, but the conviction shown by the author, the passion that is writ large on the glossy pages of this book is what makes this a worthwhile read.

Arundhati Roy, ‘one of India’s iconic writers’ (as Penguin fondly labels her), has never minced words. She is forthright and she loves it. Perhaps this is one of the reasons that agreeing with the premise of the book is rather hard for most people. It is too harsh in its criticisms, too dismissive of opposition, and too austere to believe. Allegations of ‘empty rhetoric’ are being flung at these essays, but these are essays. Essays tend to be subjective, based on experience, and analytical. As far as I am concerned, these essays comprise enough analysis to sustain an eager reader while not burdening him with a fastidious prolix. And let us not forget the U.S.P. of this author: brilliant writing. It really is a pleasure to read, this book. Even if you are not convinced with the arguments of the book, you will be floored by Roy’s impeccable style. Coming to specifics, the book is basically a collection of three essays: Mr Chidambaram’s War, Walking with the Comrades and Trickledown Revolution. The introduction, titled The President Took the Salute, gives the reader an idea as to what lies ahead—an interesting amalgamation of experience, debate, passion, flashes of brilliant insight, and a fair amount of hyperbole.

What irks me, as a reader, is a very heady argument based, at times, on the seemingly unfair premise of two wrongs making a ‘right’. This current is found in all the three essays—sometimes between the lines, and sometimes right in your face. I quote, from page seven, “If the tribals have taken up arms, they have done so because a government that has given them nothing but violence and neglect now wants to snatch away the last thing that they have—their land”. This statement, most of us will agree, is probably true in its content, but the manner in which the intent has been conveyed makes the content lose value. Similarly, I came across a lot of parallels being drawn to ‘the massacre of Muslims by Hindus’. What rattled was that Roy seems to be justifying Maoist violence on the grounds that Hindu communalism/extremism has done more wrong. Is that a valid justification? Two wrongs are two wrongs—not a combined right! Analogies such as this, I thought, diluted the logic behind the essays, making them just seem too jaundiced for serious consideration.

In the first essay, Roy has made some valid arguments against the government’s attitude towards Maoists—about the empty rhetoric perpetrated by top cabinet ministers, one of the ministers being a non-executive director in Vedanta before taking up the prestigious position in the Cabinet, how “the climate for investment” is gaining more importance than a “sustainable environment”, the measly royalty that the government gets on the profits of these “blood-thirsty” mining companies, how the war in the heart of India is a drain on the country’s economy (perhaps, more than the royalty accruing from the mining companies who do manage to set up their projects), so on and so forth. It is a well-written and crisp essay with good analysis and thought-provoking questions.

The second essay is more of a personal memoir with oodles of insight… and rhetoric. While it makes for a very, very good first-hand account of how Maoist establishments work and the description of the people involved, the writing is rather dramatic. This, perhaps, appeals to some people, but it carries with it the danger of not being taken at face-value. On the other hand, the essay provides a very concise insight into the history of Maoists in India, which is very interesting to read. It provides the reader with a perspective on how to view things as they stand today. Also, the inclusion of the condition of women in these areas and the solidarity they share—in the form of sabhas and groups—is something that is not normally spoken of in the mainstream media. The health condition of the tribals, especially children, is rather heart-wrenching to read about. More so because this description does not carry scores of statistics with it but is direct, personal and frankly stated. The vivid imagery of the Bhumkal festival is very well portrayed by the author. I had an issue with the label of ‘Gandhian’ being given to a few acts of the Maoists, but Gandhian thought is open to interpretation.

The third essay is, according to me, is a fantastic piece of writing. The fervour and belief with which Roy has written this essay is almost tangible! Energetic from the very start, it covers a wide range of issues not only pertinent to the Maoists, but also to broader questions of inequality, democracy, and civilisation. She analyses with force, though not with much documentary evidence. I particularly liked her complaints with the mainstream media today and her “should-be” speech by Dr. Manmohan Singh. The insight into the “stand-off” between the various C.P.I.s in our country is also an added attraction. Again, the seriousness of the essay is crippled by the flippant usage of hyperbole but by the end of the third essay you would have more-or-less gotten used to this style which is ubiquitous in the book.

The highlight of the book is, however, the photographs. I am not an authority on the technical ‘correctness’ of the photographs, but they carry appeal, they carry forward the burning passion of the author’s words. The book is very well-illustrated—almost like a journey of pictures, each having a story of its own… all vehemently nodding their heads in favour of Roy’s arguments.

To conclude, I would recommend the book for readers interested in at least listening to the ‘other’ side of the story. It is not an academic publication, and I don’t think it was ever intended to be. If detail and an academically more reliable perspective is what you seek, then you can keep your hands off this one! Broken Republic is a personal experience of a brave-heart, and in that fact rests its credibility.

Book Review: Murder in the Ashram