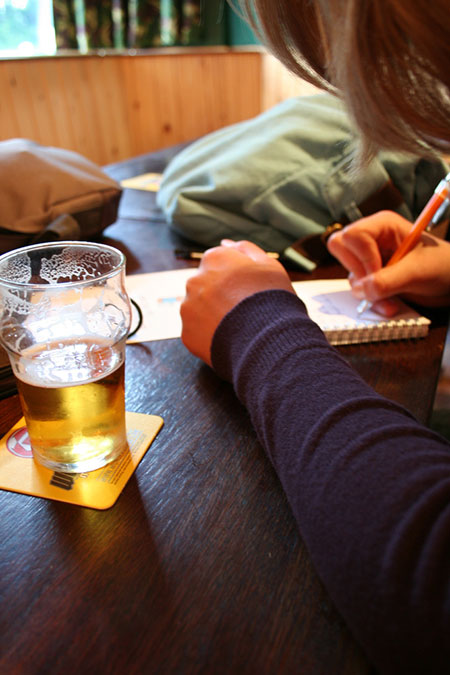 [Cue in Eminem song] One Shot… One Opportunity…

Back in February, I chanced upon an announcement on Asia Writes. A competition. One chance, one opportunity… to be published*. I teetered on indecision. Face it, my inner demon said. Don’t be such a ninny. If you are good, you are good. If not, you can resign yourself to being an academician. Writing was what I was meant for. Right?

Well, don’t get me wrong. There is nothing wrong with being an academician. I mean, no one can point fingers and call you pedestrian. But writing was what I was meant for. Right?

If I have to ask you that question, then I guess I am still not sure as of yet.

So, anyway, there I was back in February. On the brink of indecision. Oscillating between end term papers and an idea for a story for a competition. Jeebs. Not like I was actually going to win, I told myself. Break and enter. No one gets hurt. At worst, there will be disappointment. And, a short story to take the edge off.

With assurances and reassurances, I held my breath. And, jumped in. Sent in my story within the deadline. The story was titled The Crows’s Feast (No, that is not a typo. Yes, there is definitely more than one crow). The story was based upon an incident I had heard about from my father on a repeat loop over the years. The images from the story had been jammed into places in my brain that I could not—and did not want to—get rid of. It was a personal story, and the emotion in the retelling always caught me off guard. Not the emotion of the storyteller. Oh no, sir! Rather, my own emotion. The anger I felt. Somehow, I identified with the child protagonist of the tale. Not having experienced abject poverty ever, this was all in my head, of course. But each time, without fail, I wanted to grab the villain’s (in my opinion) beard, and rip it off with pleasure. Don’t be alarmed. Sometimes, writers can have violent tendencies that they turn into profit. Or, die in anger. Whichever comes first, I suppose. Well, regardless, I had a story that was sent in to the competition. Fingers crossed, I relaxed. And, went back to academia.

A month after my submission, around mid-May, I received an email from one of the judges. Before you start jumping to conclusions, like I inevitably did, let me add that he was not writing to me in the capacity of a judge. Rather, he had chanced upon my articles on Helter Skelter, and from there, onto my blog. He was writing to offer me the opportunity to contribute a story to one of the anthologies that were ultimately going to publish the stories—hold your breath—short listed in the competition I had submitted to a month ago! So, to break it down for you slow ones, he had no inkling about the fact that I had even submitted a story. He was basically offering me a chance to jump the line and head straight to the V.I.P. area.

You know when you are about to board one of those long 22-hour flights, and the lady at the counter goes: “We would like to upgrade you to business class. Have a nice flight!”? You know how you rejoice inside to know that you won’t be flying economic class after all, and can get drunk on champagne as much as you want even though you hate the stuff? Yes, that was me. On the inside.

But how could he do that? Well, he was the Founder and Managing Director of the publishing house that was holding this competition. He was handing me an opportunity to submit another story. So, whether I won the competition or not, I was getting a second shot at Urban Shots.

Here is some of what he wrote:

“I’ve read some of your essays/posts on your blog and on Helter Skelter (I like a lot of what I’ve read)… I also head a newly set up publishing firm—Grey Oak Publishers. I’m wondering if you would like to do a piece on the urban woman or the urban identity for an anthology titled, Urban Shots: Crossroads. Do let me know…”

This time I dipped into my memory bank for another story that often haunted me. Again, my father had played the storyteller. A warning tale, I think. At least, I assume that’s why this story was told to me over and over again. Regardless, something in it had kept me from forgetting it. It was the story of a Dalit woman who had to pay for love with love. After five revisions, I sent She’s Got Off Easy in. This time the response was prompt. As it turns out, I made the cut. With the contract signed within the next week, the pressure of the competition eased off. I could lose, and I would still have a story published.

Of Longlists and Shortlists

And then, the long list made its appearance on July 10, 2011. I had made it. Ironically, the story had been shortlisted for the same anthology where She’s Got Off Easy was going to see the light of day. Was this a sign? Would my first story make it to the shortlist too?

Since this story has a happy ending… yes, it did. I will be a proud published almost-writer with two short stories in one anthology. Je-sus. There is hope for me… yet.

* Technically, two chances. We were allowed to submit two short stories per entry per person. Due to the lack of time in my life at that time, I ended up submitting only one.