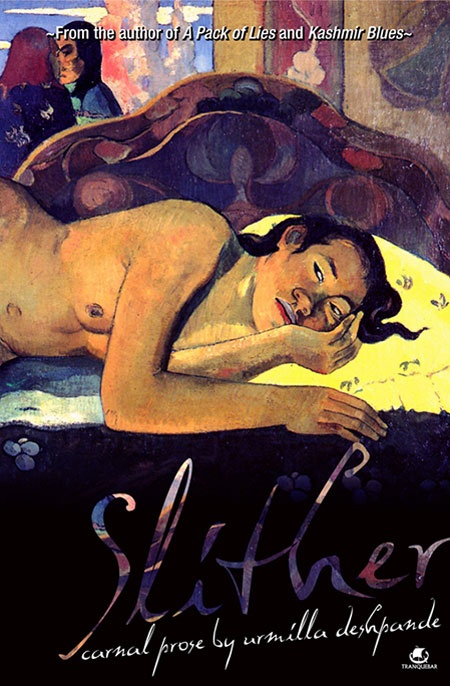 Stories, incredibly human, wrap themselves around these vignettes of lust. Sometimes, there is profound unhappiness in the places where lust has earlier been; people and times encoded into spaces and movements. Sometimes, there is staleness, a burnt taste even, and there is the realisation that there is as much wariness in people as there in anticipation. Urmilla Deshpande’s Slither shows how memory works in mysterious ways, and how corporeal events sometimes cling longer than emotional ones. Wet plunges into the India that is statistically prominent and where sex is still taboo and marriage sacred to the point of being above all questioning. Xen is about inexperience and fumbling, and the choices that arise simply because there have never been any before.

A handful of these stories map the differing circuitous routes marriage takes to reconcile love and sex, to manoeuvre pursuing one without the other and to live with the aftermath of waning of either or both. The book throws up questions, not so inexpertly so as to appear forced and not so impartial as to be unperceivable. Arranged marriage has complex sexual associations, and some of them unpleasant. Revulsion and fear lurk where in different circumstances something else could have been. Other types of marriages unknot too in his anthology, giving way to time and irritance.

The artist with his naked muses in Cosmic Latte will ruffle a few feathers, but most people will not be able to look beyond the nudes to him.

“But my paintings were not so bad. There were actual women attached to the body parts, and they were women I loved, and painted with love, and I think that came through.”

The accidental, superficial lust one feels for virtual strangers and celebrities plays out in D.U.I. and Isis. Both play out theatrically, similar to dream sequences just as fantasies would. Sex, real and imagined, desired and forced, implied and overt, attempted and unfulfilled; a strange spectrum is travelled by reading this book.

Sometimes, the thumbnails she draws from are clichés, the people you encounter in movies, not run into on the sidewalk. Deshpande puts her own spin on every story, but she tumbles back into the realm of the expected with a faulty line or two that betrays a lack of originality. It takes a lot to revamp a cliché, and some of the stories fall short of doing just that. Society’s misfits have had too much screen time to appeal easily to the more avid reader.

The book is worth reading. It strays into strange waters, places that urban India still takes the long way around. A few pieces here and there disappoint, but when you finish the book, you know she took you a step in the right direction. Because it’s easy to forget that as Deshpande says in Taxidermy: “There are things we need, looks, touches, moments, that have nothing immediate to do with survival.”

CD Review: I’m with You