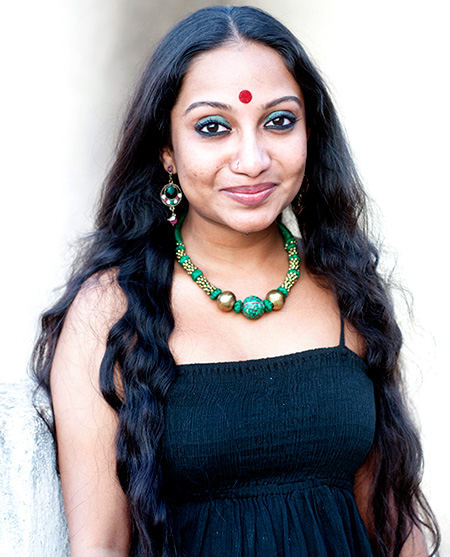 We all have poets in us, but some are truly blessed. They come closest to understanding the inventories of the heart, putting them through the limitations of language. And here is someone who thinks that if not for poetry, we’d be scratching our emotions out on our own skins. Sharanya Manivannan was born in India in 1985, and grew up in Sri Lanka and Southeast Asia. Her first book of poems Witchcraft was published in 2008, after several years of a spoken-word career that brought her international acclaim, and was described by poet Ng Yi-Sheng as being “sensuous and spiritual, delicate and dangerous, and as full as the moon reflected in a knife”.

Sharanya received the inaugural Lavanya Sankaran Fellowship in 2008, and was shortlisted for both the 2009 Srinivas Rayaprol Prize and 2010 Toto Award for Creative Writing. She is currently working on new collections of poems titled Bulletproof Offering and Cadaver Exquisito.

We spoke to Sharanya about poetry and her creative process. Read on for excerpts—

We all complain about clichés, and yet we can’t do without them; how did you discover the poet in you? We’d like to hear about your evolution through the years as well. I have learnt that this will always be inspiring to at least one person who reads it.

I’ll tell you why I like this question. It’s because you phrased it as “how did you discover the poet in you?” and not “how did you get starting writing?”. You’ve perceived the difference. I was about 16 when I discovered the poet in me. I had been writing for almost 10 years. But that was the point when things really began to coalesce in terms of an identity, a pivotal part of myself, something I was rather than something I did. And it had everything—everything—to do with the fact that this was when I stepped on stage with those poems, as those poems. For those poems.

Is it ok to start with imitation? Aristotle once said that art is the mimesis of life.

Yes, it’s okay to start with imitation. No, it is not okay to never evolve.

Poetry is a dying art form, in the context of populist perceptions.

Not at all! Not for as long as the human heart remains the marvelous thing that it is. Not a chance. Poetry is the whole point of language. If we didn’t have it, we’d be scratching our emotions out on our own skins.

Do you agree that poetry remains disconnected, rather elusive to many people? It is perceived to be an elitist form of expression, something for the literary intelligentsia.

Maybe, but that doesn’t really bother me. I’m very distrustful of instant celebrity in the art world. I have a feeling that’s all either fluke or clever machination. As an artist you have to honour your own journey, and be authentic to your own life. And loyal to your muse. You have to trust that process and not measure it against things like sales, accolades, and media interest. I’m interested in a long career. I’m interested in writing many things over many years. And I have faith that whoever needs to find that work, will.

Yes, there’s a method. I don’t have much of an education, so I can’t comment on whether this can be taught or learnt. But it’s really a lot like madness, to go with what you said. You give in, you surrender to it, and you trust that it has its own logic. It’s like dancing at a party with someone else, unchoreographed, without rehearsal. You just go wherever the music takes you.

I am personally interested in your Scorpian personality, which I think surfaces in your poetry. There is an undeniable sensuality and an unnerving darkness to your poems.

I’m actually a Leo Sun, born on the 30th of July, but I have Scorpio Rising in the anaretic degree, which means its qualities are intensified. Your rising sign is basically how the world sees you; it’s as important as your sun sign. And I’m really very Scorpio that way. It reflects, as you’ve surmised, in my poetry, but my poetry is an extension of my obsessions, and extension of my obsessive nature itself. “Poetry is the whole point of language.”

Virginia Woolf once said that a woman needs money and a room of her own if she is to write. Can poets today survive with just the remuneration for their art?

Well, there isn’t much remuneration for poetry to begin with. It’s necessary to do something else. Books aren’t cheap. Neither is vodka. There was a point in my life, about four years ago, when I was honestly poor, and so I have no romantic ideas about poverty. It’s important to me to set down roots. I’d like a house of my own, around which the rest of my life can flow. I’m working on this.

Tell us about your recently concluded column in The New Indian Express: The Venus Flytrap.

I began to write a column called The Venus Flytrap in April of 2008 for The New Indian Express, and it ran continuously in that paper till the supplement it appeared in was recently discontinued (February 2011). My brief was essentially to write about “anything I wanted”, and I think I really found my voice in terms of a certain type of nonfiction essay because of this column. I wrote about a variety of things, mostly culled from my own life—travel, heartbreak, food, music, politics, and more. People say there was a lot of sex in it, but I think it’s all in the eye of the beholder! The column was a little quirky, and had a dedicated readership. I loved writing it, and really hope an opportunity to revive The Venus Flytrap comes up soon.

Coming to your upcoming collections of poetry: In Bulletproof Offering, you’ve ideated the use of myth in the most extraordinary ways. How would you connect your personal emotions to the experiences of Sita and Lucifer? Specifically, what is their place in your world?

I spent some years in the Jungian forest, the spiritual desert, so to speak. Sita and Lucifer were my only companions, the only archetypes I could relate to. I was completely bereft during this time, in numerous ways, ways which I can’t enumerate because it isn’t even about what happened or when, but just the complete collapse of some internal/eternal logic. I’ve always loved mythology, and I’ve always been empowered by it, but above all else, mythology consoles me. And I was deeply consoled by the thought of Sita and Lucifer choosing to go into exile, choosing to enter the underworld like Inanna, knowing that this was necessary; that the crux of survival rested on one’s willingness to undergo this initiatory rite. That’s where I was, and that’s where they found me.

“It’s like dancing at a party with someone else, unchoreographed, without rehearsal. You just go wherever the music takes you.”

Cadaver Exquisito: Why is landscape always so connected to the mind and body? And so pivotal to poetry, particularly? Sometimes, the same images are used to convey conflicting emotions as well.

I can’t speak for anyone else, but I’m personally really taken by landscapes of both the built and natural world. Place and geography have an effect on me. And the body itself, the body as a site, is also a longtime preoccupation of mine. In Cadaver Exquisito, I’m concerned with the dismembered psyche, and it manifests itself upon my landscape in the form of sights and sounds in Chennai, which in this context is a site of grotesque energy. I don’t mean grotesque as in disgusting, but in the artistic usage, of bizarre and surrealistic fantasy. Cadaver Exquisito is Bulletproof Offering’s Siamese twin. The two manuscripts are being birthed together, permanently connected by the same period from which they came, but are absolutely autonomous animals at the same time.

Spoken word versus the written word. You dabble in both. Is the latter more impersonal?

No, I don’t feel the latter is more impersonal. In fact, the latter is far more personal: The relationship is entirely between the poem and its writer (or the poem and its reader). When I’m onstage, I’m connecting with multiple people, I’m in a more expansive sense of self, and if it’s a good reading, I really do radiate all the love I can. The spoken word is a moment, an experience. The written or remembered word lingers.

If you had to leave behind a small trace in a vast, sandy terrain, what would you choose to draw?

My notebooks are full of curlicues. So maybe a tree of tendrils. Or a little heart. Simple and sappy like that.