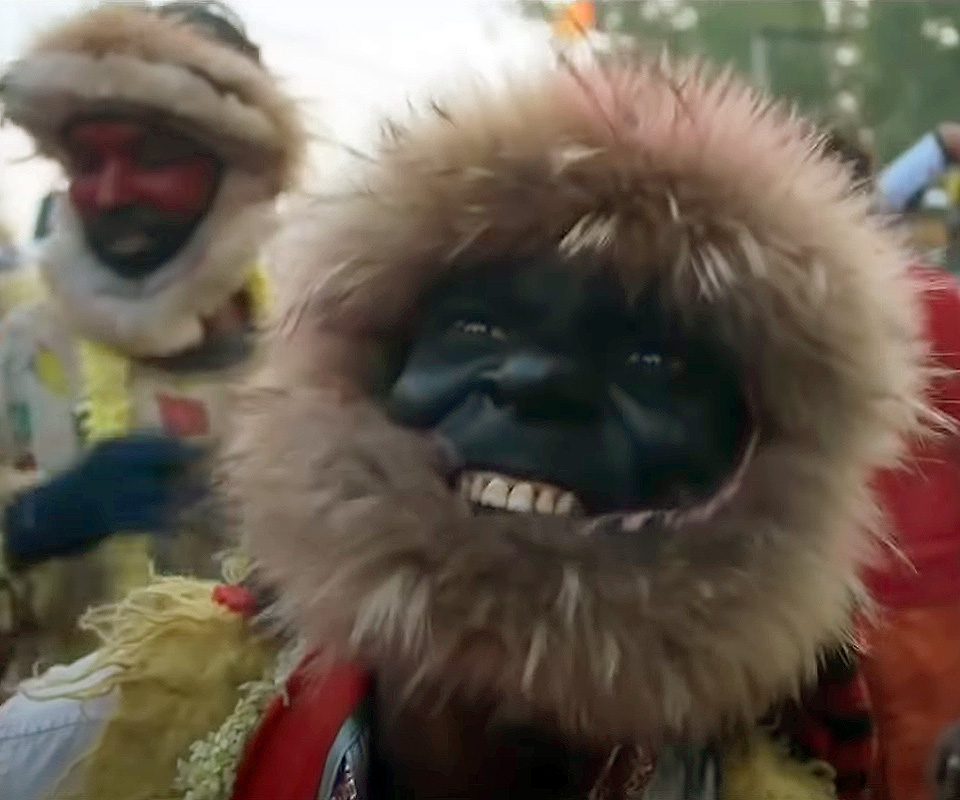 The sounds that make up the title of Prateek Vats’s Eeb Allay Ooo! resonate through its length.

Their most direct expression is in the deep, full-bodied croaks and high-pitched whoops of its monkey-repelling squad, assigned in New Delhi’s Raisina Hill to scare the animals away from the country’s highest government offices. We hear these sounds even before we see their source as newly-arrived migrant Anjani (Shardul Bharadwaj) gets hurriedly trained in the film’s opening moments. These curious sounds are meant to imitate those made by langurs, the monkey’s natural enemy, and are a requirement for Anjani’s new contractual job. But while they are heard repeatedly in the film and make up its rich soundscape, the sounds are important in a figurative sense too, since much of the film’s larger themes circle around them— themes of unskilled work, of replaceability and interchangeability, of dehumanisation and the frail man-monkey divide.

The work that people like Anjani and Mahender (Mahender Nath, a real-life monkey repeller and an inspiration for the film) are hired to do, strange and precarious as it is, depends solely on their ability to produce these sounds. Although not considered skilled work, it is clear that Mahender, whose family has been in it for generations, has an expertise the others do not. When Anjani records Mahender’s utterances of these sounds towards the end of the film, unknowingly also preserving them given what follows, it is in recognition of his unique talent. Anjani, whose sounds never attain the timbre of Mahender’s, devises several alternatives from prerecording langur calls to planting posters of langurs in the neighbourhood and finally dressing up as one, and some of these prove immensely effective against the marauding simian hordes. And yet, despite all his inventiveness, he is called up repeatedly for his inability to vocalise “eeb allay ooo” properly, ultimately losing his job.

The unreliability of this job stems not only from its contractual nature but also from how easily replaceable he is, a point sharply embodied in the stuffed langur that sits on a wall later in the film, fitted with a machine that plays the sounds in a loop— Anjani’s vocation encapsulated in its lifeless, mechanical body. This replaceability and its connection with the sounds is further emphasised by the fact that the work of keeping monkeys away was originally done by captive langurs and was only assigned later to men, when using the former became illegal. With Anjani’s transformation into a langur in what are some of the film’s most enthralling sequences, animal replaces man just as man had once replaced animal. While Anjani’s alternating between human and simian states highlights the similarities between the two, they also point to an essential dehumanisation that the job brings about.

A scene finds Anjani trapped by his coworkers inside a cage meant for monkeys. He is forced to eat bananas, which are pushed through its iron bars before his co-workers agree to let him out, an act of intimidation that suddenly makes him aware of the plight of the monkey that replaces him inside the cage seconds later. The parallels aside, the scene is also an example of how Anjani is treated at work, particularly by his contractor who bullies and exploits those working for him. The precarity and challenges of the job are heightened further both by Anjani’s extreme fear of the animals he is ironically meant to scare and equally by the monkey’s peculiar place in Indian culture, seen as a nuisance and yet treated as a living incarnation of the god Hanuman. Hence, while expected to carry slingshots to invoke fear in the animals, using them, we learn, can be dangerous for both monkey and man— an early scene of an injured monkey presages the tragic news the film delivers towards its end. Making a film about monkeys that disrupt work in the country’s seat of power and therefore must be driven away is also of course Vats’s cheeky way of using the animals for political commentary and satire.

Uncertainty and unwelcome impositions also form a part of the jobs of the other contractual workers in the film— Anjani’s pregnant sister (Nutan Sinha), who packs and sells spices, and brother-in-law Shashi (Shashi Bhushan), a security guard who works at an amusement park. Both Anjani and Shashi are given weapons to keep as part of their jobs, objects intended primarily to scare rather than use, a rifle in the latter’s case becoming a source of increasing domestic tension. While the sister works out of their small, cramped living space, the men are seen outside in their spacious sites of work, the railway tracks that they must cross to return home at the end of each shift a symbolic line separating them from the other half. There are scenes with both men waiting along the tracks for trains to pass— the trains themselves becoming symbols of the migrations of millions like them, who have come to the city, only to be served new difficulties and humiliations along with a constant threat of joblessness.

The sounds of “eeb allay ooo” that open the film also feature in its chaotic ending. Anjani utters them as he spots a figure dressed as Hanuman amidst a passing procession of costumed and masked characters. Caught in a jumble of image and sound, the words signal a descent into a state of frenzy symbolised in particular by a dance that is both liberating and a sign of a break from reality. The sounds that had once confounded him have now become second nature but the film’s glance is towards all the things Anjani has lost in the process.