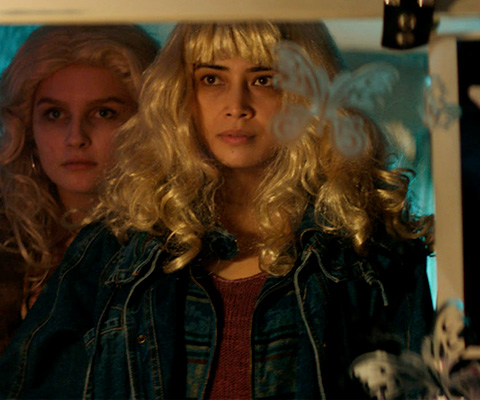 The path to the American dream is paved with nightmares in Indian-American filmmaker Sonejuhi Sinha’s Stray Dolls, which premiered at the Tribeca Film Festival last month.

A moment stands out early on in the film. Una (Cynthia Nixon), the Polish owner of a motel in Poughkeepsie, is introducing Riz (Geetanjali Thapa) to the cleaning job she has just offered her. Riz is a young Indian woman who has recently arrived in the promised land in search of a new life. The motel will be both home and family to her, Una says, while assuring Riz that in this fabled land of possibility, hard work and honesty are sure to bring her success. “Is this real?” Riz suddenly asks Una, ostensibly about a picture of Niagara Falls on a holiday brochure. It is a question that the film will ask repeatedly of that promise and the ingredients necessary for its attainment.

Motels in American films have long been used to represent an America that doesn’t quite belong with the rest, an America that like the motel itself is on the margins. Their geographical distance from thoroughfares has traditionally allowed for seedy businesses and criminal activities to thrive under their roof while keeping them, at least for a while, outside the immediate purview of the law. Moreover, functioning as brief resting places for motorists, motels have often stood as symbols of transitoriness, short-lived if not entirely pleasant stopovers on the way to better and more permanent destinations on the road and in life.

The fictional Tides Plaza Motel is the setting for much of the action in Stray Dolls. For Una who left everybody behind and came to America to start over, it is a realisation of the American dream, a fulfilment of that promise that America makes to all those who come to her shores. Ironically, it is also the place in the film where that dream slowly but surely slips out of reach.

Eager to distance herself from a past life of crime, Riz hopes to make what she calls at the start of the film ‘an honest living’. Yet despite her best efforts and spurred on by her roommate, the younger and more reckless Dallas (Olivia DeJonge), Riz soon gets sucked into a vortex of drugs, theft, and murder. Both women nurture hopes of brighter futures, telling themselves that the offence they are about to commit is only a one-time thing, a bitter means to a better end. But with every illicit turn, the path of return becomes more arduous. The two phone calls Riz makes to her parents after two separate and progressively dangerous criminal acts have a deep underlying sadness to them. She describes with great flourish the abundant mountains, blue skies, and swimming pools the new country has given her access to, drawing up an image of the life she had hoped for. It is important that while most of the scenes in the film occur indoors and at night, all the experiences Riz details to her people back home are associated with the outdoors and hence with the freedom that her life lacks. Stray Dolls doffs its hat to seminal American crime films that have come before it.

In Stray Dolls, the motel and its occupants become symbols of an America that is not only alone and struggling, but also desperate to believe in the dream, its claims of equal opportunity, and its guarantee of a second chance. Both Nixon and DeJonge bring to their characters a steely resolve mixed with a willingness to exploit others that counter Thapa’s more modest composure. While its women—more vivid, complex, and morally ambiguous than the peripheral and sketchier male characters—show clearly where the film’s sympathies lie, the demands on them serve to expose the cost at which the dream is realised, if at all.

With one character in the film referring to the duo as ‘Bonnie and Bonnie’ and with its closing shot of two spirited women in a car being chased down by the police after their exultant if short-lived adventure, Stray Dolls doffs its hat to seminal American crime films that have come before it. Though the women’s activities go surprisingly unnoticed and unchecked for a while, the space and time it offers also allows them to plan and hope for the future while exploring the nature of their own budding relationship. Dallas has had a long association with Jimmy (Robert Aramayo), who also helps her sell drugs. However, as she admits in one scene, Riz is the only person to have ever come to her rescue. There is love, comfort and loyalty in their bond, things sorely lacking in her alliance with Jimmy. Moreover, it is Dallas who ultimately takes Riz to Niagara Falls. An actual glimpse of the Falls helps Riz hold on to the belief that the American dream, too, could be real. It isn’t for everyone, though.