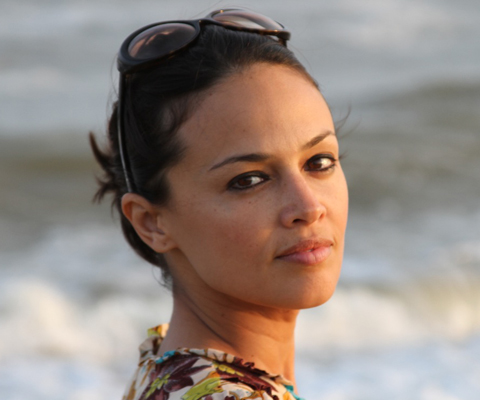 That idea is reinforced throughout the book in ways large and small, as its characters seek the illusory promises of homecoming. In particular, Grace, its narrator, searches for a sense of belonging in a hodgepodge of identities: half Indian, half Italian, raised in India but living in America. Told through her eyes and set in the present tense, the novel is paradoxically intimate as it examines Grace’s deep-rooted sense of otherness; inclusive as it considers her isolation. The novel begins with Grace’s return from the U.S. to Tamil Nadu. Her mother’s death is the impetus, but she stays in India after learning that she has a secret sister, Lucia, who has Down Syndrome. Rather than leaving Lucia at a residential facility as her parents did, Grace chooses to care for her and live in a small rural village near Madras. As she grows into her new life, Grace leaves her crumbling marriage—partly because she does not want children—to create a home for herself, Lucia, and a pack of stray dogs.

Through vivid, tactile prose, Grace’s world comes alive with detail: the sea is “a sheet of metal suspended out of the sky’s head like an exhausted grey tongue”, her parents sway to music each night “like two serpents in their battle dance”. The opening of the book thrusts the reader into the heat of Madras in 2010, walking out of the airport into air that “attacks you at the threshold”. Doshi, who is from Tamil Nadu, uses her understanding of place to ground the book with almost overwhelming precision. Her vivid landscape serves as a backdrop for juxtapositions: rural versus urban, Indian versus American. Then, layered on top, one of the core conflicts of the book: individual freedom versus familial duty. Grace, who was not raised with a sister, still feels a powerful need to care for Lucia in a way that her parents never did. Her choices are explained with occasional sharpness and anger, not sentimentality, as she considers the longing she once felt for a sibling and the “heaviness” that Lucia carries instead.

After bringing Lucia into her life, Grace takes on an additional form of isolation that she didn’t have before. While living in America, she felt, “that large, one-size-fits all American loneliness”, but learns that community can be especially difficult to find for single women in rural villages. She and Lucia live without men on a large seaside property, always under threat and subject to communal disapproval. Threats lurk on the outskirts of their seemingly picturesque life in the form of loan sharks, developers, and corrupt politicians. Even thoughts of hiring a night-watchman are dismissed, because while there to protect, they can also be sources of danger. Grace’s desire to belong—long hampered by her rootlessness—is compounded by her defiance of traditional family structures and domesticity.

Grace didn’t set out to subvert societal expectations, but in her remote village in rural Tamil Nadu, her lifestyle is a radical act. Small Days and Nights features an imperfect protagonist who faces entrenched political and cultural challenges, and without much fuss, works to survive them. In its lyrical, deconstructed form, the novel tells the story of big things that happen in small places; the things which deteriorate over time while still thriving, ready to “bludgeon you with their aliveness”.