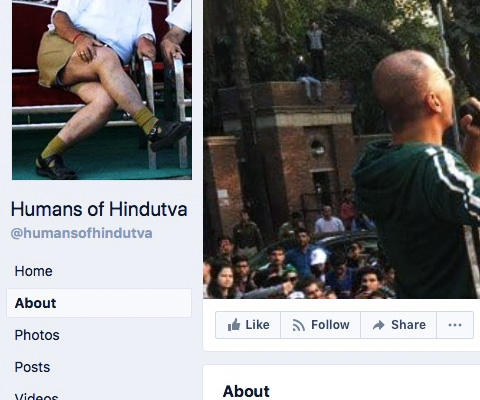 Now more than ever, it seems as though all the world’s a hashtag.

While most of us are happy to react to increasingly ridiculous happenings from around the world—often with an emoji, occasionally with the odd heartfelt rant-essay—one brave, anonymous soul decided the only way to deal with their (and our) collective frustration, was to start a Facebook page.

A parody page at that.

Humans of Hindutva, marked as a religious organisation on Facebook, is one of the latest in a stray bunch of online-only joke spaces that skewer the daily news. Just look at the recent series of memes on condom brands’ proxy ads that can be shown between six a.m. and 10 p.m.; its nomination for a new national anthem (hint: it’s a Nirvana song); or the brand new Gujarat tourism ads that make all cities look like they’re staight outta Westeros.

On Humans of Hindutva, anything that harbours or propagates Right-wing views or plain old stupidity is fair game. It’s like what Andy Greenwald of the website Grantland says, of Stephen Colbert: “By speaking with the same shouty authority as his targets—and claiming to harbor many of their same views—Colbert was a wolf in elephant‘s clothing. The joke wasn’t just on him.”

In the year or so that it’s been around, Humans of Hindutva—reminiscent of Humans of New York as much as of The Colbert Report—has gathered over 125,000 followers without any sponsorship or boosts. Encouraged, the anonymous Admin decided to branch out and start a website—Satyanash.com, now offline—which claimed to have received over 150,000 visitors in just a month after it was unleashed upon the world.

The following are excerpts from an exclusive interview with the Admin of the wildly popular Facebook page. Humans of Hindutva describes itself as a ‘religious organisation’.

What was the seed for Humans of Hindutva, and following that, Satyanash?

I think I mostly started Humans of Hindutva to vent some of my frustration when I noticed that some of my friends were succumbing to these regressive, non-inclusive ideologies. These were people I grew up with and I always thought of them as being level-headed. They were suddenly so full of hatred. I guess I wanted to ridicule their newfound nationalism.

The real reason why I started Satyanash, the website, is because at times the Facebook format feels restrictive. What I really wanted was to make it like a Desi version of The Onion, which has always been one of my favourite news satire websites (The Daily Mash is a close second), to have multiple takes on current issues. I guess I’m finding it hard to pull this off alone. I have a day job and an active family/ social life so it gets difficult to write at times. Hopefully, with more people writing I can turn this into an interactive community.

Also, in case Facebook bans me, at least I’ll still have a place to reach my core audience.

Rewind to the time you started Humans of Hindutva: what was your first post about?

The first post was a stupid meme I made about Yogi Adityanath. It didn’t really get that much of a response. Things were going slow until I put out a post which imagined Ryan Gosling as a customised R.S.S. child. It was widely shared and I woke up the next morning to find that I had gained 10,000 followers in a day.

What has been the general tone of the reaction that you’ve received for your posts?

It’s a mixed bag. Obviously, I get a lot of hate mail. It’s rather jarring to wake up and check your inbox, only to have strangers telling you to kill yourself or threatening you with legal action or physical assault. I have learnt to laugh it off but a part of you always looks over the shoulder. Conversely, I also get a lot of encouraging mail from people all over the world. I’ve lost count of the marriage proposals and requests for dates.

“It’s rather jarring to wake up and check your inbox, only to have strangers telling you to kill yourself or threatening you with legal action or physical assault.”

Who would you say, broadly, are the butt of your jokes?

I’m a Humanist at heart. I don’t think any political ideology is beyond human life. I love my country and abide by its Constitution, which is an inclusive document and appeals to our best nature. Anyone who disagrees with equal rights for all is someone I can’t take seriously. People have this misconception that I am against Hinduism and Hindus but they couldn’t be more wrong. As an atheist, I am personally dismissive of all religion but I take pot shots at Hindutva because it is not Hinduism. I hate how Hinduism is being hijacked by some people to further their political cause. I know other religions are not so progressive either but I believe in cleaning my own house before judging others. Glass houses and all that.

Have you had an experience where the target of your jokes doesn’t quite get that they are the target?

All the time. Going by its name, some people assume that the page will cater to their daily dose of Hindutva. Then they write to tell me that they are disappointed that the page is not what they thought. I want to be inaccessible to the masses, which is why I often put up cryptic jokes which I think only a few would get. Newcomers to the page are confused by some of the terminology being used. I want this to be one giant inside joke.

“I want this to be one giant inside joke.”

Have there been attempts to silence you?

If you search on Facebook you’ll find plenty of pages urging their followers to mass report me. Then there are pages who have attempted to mirror me. I find it hilarious because they just don’t get me at all. They think I’m a J.N.U. student, or a beef-eating terrorist-sympathiser, or a Leftist. One fine day my identity will be leaked and they will feel rather silly when I’m revealed to be the vegetarian Brahmin businessman that I am. It really makes me laugh into my glass of beer most evenings. What, for you, is the greater purpose of satire?

I think that satire, in its truest form, holds a mirror to society and helps us see things as they really are. We live in an age of scepticism where no one likes being lectured on moral conduct and ideal behaviour. Earnestness is passé. In such an arrangement, humour helps get the point across more easily than a sincere, fact-based essay. Some of my favourite writers, like Joseph Heller, Chuck Palahniuk, Anthony Burgess, Kurt Vonnegut, and John Kennedy Toole, all used satire to get their point across. For me, writing each post takes about 10 minutes. I have a folder of stupid photos I’ve been collecting for some time. It’s just a matter of correlating them with the right event and some text. The jokes really write themselves. Satire in India is always falling behind the more ridiculous reality.

Do you think that for satire to thrive, specific social conditions need to exist?

The difficult thing about satire is that people often mistake the exaggerated lampooning for the author’s real convictions. I think in order for satire to truly work, both the author and the audience have to be on the same wavelength. Comedy can be quite tragic at times. For example, if you remove the laughter track from [the T.V. show] Friends, it’s just a bunch of people being mean to each other and poking at each other’s inadequacies. That laughter track is there to remind you that it’s just a joke.

“The jokes really write themselves. Satire in India is always falling behind the more ridiculous reality.”

Unfortunately, satire doesn’t have such cues. You either get it or you don’t. What I particularly like about political satire here is that I only have to slightly exaggerate the statements made by Indian politicians to hit home how ridiculous they are. But then again, if you don’t know me then you’d probably think I’m being serious.

Do you think the Internet has helped?

I think the Internet has turned us all into comedians. If you go through social media then you’ll notice how everyone is commenting on their everyday life. There’s a general air of cynicism all around. Of course, people have been doing that forever but now we frame our thoughts and put it out to the world for all to see. Thanks to the Internet, we are all observational comedians. “No matter what your intentions are, people are ready to either take offence or see you as being biased.”

And yet, some people argue that satire is dead because of the Internet. A couple years ago, Facebook apparently wanted to introduce a specific ‘satire’ tag to differentiate actual from fake news, when fake news was not yet the thing it has become today. Now, they’re testing a ‘disputed’ tag instead, just to sift fact from ‘alternative fact’.

Facebook tagging content to help differentiate real news from fake is definitely a nod in the right direction. I don’t think satire will be affected too much by such a move. I’m just curious as to how they will pull this off. If they depend on the online community to tag individual news articles as fake or real, then there might be some mixed results because groups of people will tag any news that they don’t agree with as being fake. Much like the current American President.

The West has a far more developed palate when it comes to satire: Colbert, Saturday Night Live, M.A.D. Magazine. Is it just because they know how to exercise, more efficiently, the idea of free speech for all?

I think we Indians have a massive chip on our shoulders. We tend to take things seriously, because in India, religion is inextricably tied up with politics due to votebanks. When you criticise a political party in this country, people assume that you are attacking their way of life or their world view. I think we desperately need a local Jon Stewart to show us that all politicians are corrupt and self-serving. As a nation, India thrives on whataboutery. No matter what your intentions are, people are ready to either take offence or see you as being biased.

With such a large fan following in so short a time, do you ever feel like you’re preaching to the choir when you get these likes and shares?

To be frank, I don’t think it’s that big of a following. But word is getting around. Just the other day I was at an airport and this guy sitting next to me in the waiting area was reading one of my posts. It felt surreal. The thing is, I have never advertised so this reach has been completely organic. I don’t think of it as preaching to the choir because I’ve had some ‘nationalists’ writing to tell me that they didn’t look at things the same way after I broke it down. These are the people I target. I merely want to say my bit and hope it lands somewhere.

The Value of Morality