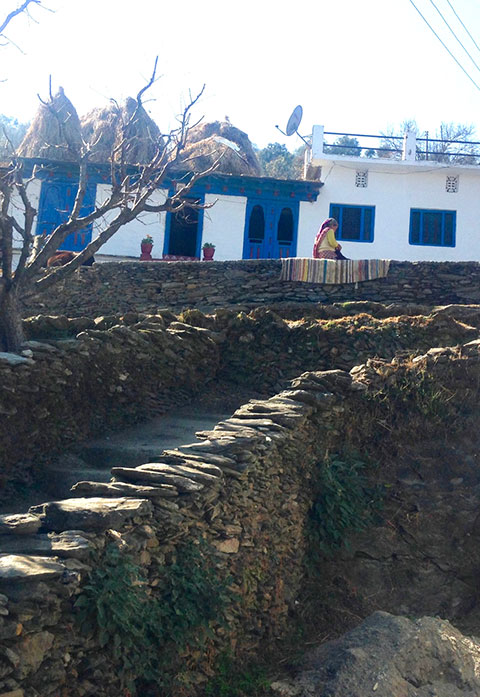 Plumes of white fog floated up, creeping, spreading as if from an endless pit. The rising cloud coloured the valley white and all that remained in the white smoke were the faded silhouettes of trees. The fog grew while nature — the usual cacophony of birds and cows and roosters and dogs and people — waited with bated breath. In Almora, which in the vast darkness of night appeared as a pocket of freckled light, there would be a carnival, a mela. Tara decided to spend the day at home, listening to the wisdom of the milkman who greeted her at dawn by stating, “Today is the kind of day to rest.”

Looking out of her window, Tara followed the fog as it churned around the mountains and in the spaces between them, as it stretched into a wispy river. Hunched over a bucket of water, her hair in yesterday’s pigtails, Shyama washed the dishes. Tara sat by the chulha, warm, imagining how cold the dish water must be. Shyama’s bucket was now empty and she walked over to the faucet for a clean refill, humming a song Tara did not recognise. It was a slow morning, the kind of slow that brought upon an unexpected chill and flowing fog. Everyone and everything paused to sense the change in the air, to take in the first signs of a coming winter. Where did my childhood go, she asked herself, looking at her hands, rugged from the washing, the cooking, the farming, the stitching, the chopping. Photograph by Nikhil Gulati.

The fog cleared, slowly, and the layers of hills were awash in a palette of gray. The village came to life. Two women conversed in rapid Kumaoni.

“Are you going to Almora today?”

“How can I go? There’s food to be made, clothes to be washed, farming to be done. Your brother-in-law may go, but I will not.”

“You’ll wash clothes? In this weather? Can’t you see it’s going to rain?”

“What to do, sister, the clothes need to be washed. I can not wait for the sun to come out.”

As if on cue, a brightness filled the sky, warming the air ever so slightly.

Unable to see the women, Tara heard the echo of their laughter while she kneaded the dough, her glass bangles jangling against one another.

“This is the world we live in, sister. I’ll go now, while the sun is still up.”

After preparing the afternoon meal, Tara decided to lie down; snug in her cotton-stuffed blanket, she basked in the quiet. Only the rhythmic coo-ing of a distant bird was heard.

“Chachi,” said a young girl, her sandals flapping against the stone as she bounced into the veranda. She handed Tara a cloth sack.

“Arre wah, bitter gourd. Tell your mother thank you. How are your studies going, beta?”

“Inside, studying.” The girl ran into the house, paying no heed to Tara’s afterthought. “Don’t start your giggling, now. Study.” But she spoke too late. The girls promptly began their hushed conversation, occasionally bursting into fits of giggles, the same ones Tara had warned them about.

She took the bitter gourd out of the sack. I should give something in return. Grunting and puffing, she pulled herself up the cucumber tree, plucking a few fruits, which she wrapped in her dupatta and, upon climbing back down, transferred into the cloth sack. As the girls continued to whisper a language riddled with secrets, Tara lay back down, quickly falling asleep as the warmth overtook the nip in the air.

She dreamt of swimming in the fog, but instead of flippers she swam with large silver wings. Shyama asked her where she was going, but Tara did not know; she continued to swim in the fog, thick and springy. Curious, she dipped a finger into the spongy river and put it in her mouth; the river tasted like tamarind. With much laughter, Tara abandoned her wings and swam into the tamarind-flavoured river, chewing out caves of space to breathe in. She saw her husband’s feet dangling from the surface; he was sitting in a boat. She swam up to him and they made love in the boat.

Using a shovel, Shyama scooped out chunks of the river to clear a path. Suddenly, Tara grew afraid of losing the river to the path and this she told Shyama, who consoled her by saying, look at all the people we’ve helped by creating this path. Now they can walk to work without worrying about snakes. Now I can be a Pradhan just like you. Tara saw the joy on Shyama’s face and felt its warmth on her own body, tingling. The fog melted, transforming into a river of water, which Tara drank from. The water was sweet. She found her wings were gone, that she was sinking towards the shadows of water snakes on the river bed. But her husband pulled her up onto the boat and she was safe there.

Sunlight streamed onto the bed in long blocks of light and the warmth pulled Tara out of her dream. She glanced at her phone. It’s been half an hour, I must have been really tired. The girls were in the room next door, immersed in conversation.

“I can hear you,” Tara called out to them, her voice cracking. “Stop talking and start studying.” A sudden hush followed. Tara knew it was only a matter of time before they began chatting again. Like koyals, Tara thought, always coo-cooing when they’re together. Tara was glad that Shyama had someone to talk to, someone her age. Girls at this stage of life need strong friendships. They need to learn whom they can trust and whom they can’t.

Gathering the clothes that needed to be washed, I still feel like a young girl sometimes, Tara thought to herself, but my body is that of an old woman. Hardly thirty years old, her joints ached from the physical toll they had paid. Where did my childhood go, she asked herself, looking at her hands, rugged from the washing, the cooking, the farming, the stitching, the chopping. At this moment, more than anything, she wished she too could giggle and laugh and read words and whisper secrets.

That sort of life she never had, could never have. Her life, her worth was determined by the achievements of her hands, her body. Elections come and go, Pradhan one year and a normal woman the next, her hands whipped the water now foaming with soap, it is my responsibility towards my family that’s permanent. Because no good would come from the admission, she rarely admitted to herself that she was tired. Her husband and Shyama helped with the work, but the work, like time, never stopped. Is this what I have to look forward to, one chore after another? Is this my life now? Abruptly, Tara took her hands out of the bucket, rinsed off the soap, and moved inside, near the chulha, onto the bed, and turned on the radio. Washing could wait. An old Hindi song played softly.

(Somewhere far away, when the day dozes off,
The evening bride comes slowly,
Holds my being captive.
In the garden of my thoughts,
Of my dreams, someone lights a lamp,
Lights a lamp.)