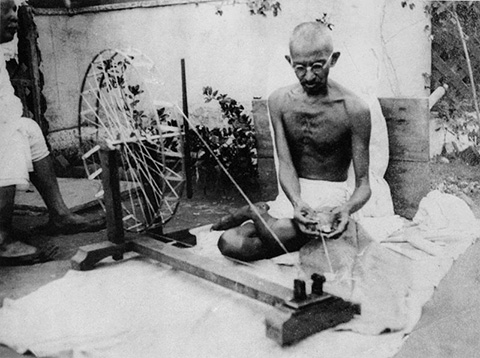 The Oracle of Tripe #2

Language and, as a corollary, ideas are notoriously susceptible to miscued interpretation. They wear the garb of the times in which they thrive. If that were not the case, so many of our overtly idealistic revolutions wouldn’t have come to a painful and disappointing conclusion soon after their genesis, and Che Guevara might still have been alive to share a cigar with Castro. Wishful thinking, I guess. There is a need to reclaim notions like Swadeshi and Swabhimaan from jingoists.

On the eve of Gandhi’s 144th birth anniversary, a rather similar, illustrative construction came to my mind: Swadeshi. In the context of an increasingly globalised world, where identity is the price one pays at the altar of development and modernity and where slogans like “Bada hai toh behtar hai” have become commonplace, even acceptable, what does Swadeshi even mean? What are the philosophical, cultural, and economic constructs defining the essentially political ideas of ‘deshi’ and ‘videshi’? Without Bapu to conveniently clear the air for us, this simple word has been repeatedly hijacked in the name of personal and vested interests, with interpretations ranging from political and economic isolation (à la North Korea) to a source of nationalistic pride and self-sufficiency.

Although wide ranging, our understanding of Swadeshi is deeply entrenched in our somewhat circumscribed comprehension of nationalism, for a Swadeshi spirit that bans the use of everything foreign, big or small, however beneficial it might be, and irrespective of the fact that it impoverishes nobody, is a narrow reading of the idea. It leads to ‘tunnel vision’ that severely restricts the scope of what can be accomplished through a more open interpretation. But just how tricky the situation is can be gauged from the fact that the expression was first used in 1905 by social activists to unite the various protests surrounding the Partition of Bengal. Given that Bangladesh is now deemed to be a separate nation (and, often, a nuisance due to the constant influx of immigrants), do Bangladeshi goods come under the ambit of Swadeshi or do we consider them to be foreign?

India, or any other nation state for that matter, no longer exists in a social, economic, or political vacuum.

At its core, Swadeshi implies restricting ourselves to using goods produced by our immediate neighbours, with an eye on protecting the home industry. In a nation fractured along several lines like religion, caste, and class, it was perhaps meant to inculcate a spirit of brotherhood amongst all its citizens by directing their angst outwards. This philosophy, having influenced the ideas and opinions of a majority of Indian leaders primarily through Gandhi, also guided the direction of trade and foreign policy for several decades after independence. However, the single-minded devotion to protection of domestic industries discouraged competitiveness and bred complacency. Assured of a market for their inferior goods, the public sector had no incentive to innovate or develop competency. All investment in research and development was centralised and private enterprise was severely inhibited because of the restrictions imposed by ‘License Raj’. As a result, instead of kickstarting the Indian industrial engine, an over emphasis on self-sufficiency had exactly the opposite effect, that is, an increasing reliance on imported goods resulting in products that grew more and more inferior with each successive manufacturing cycle. The success of Japan, through alliances between the Ministry of International Trade and Industry (M.I.T.I.) and informal industrial agglomerations called keiretsu, and Korea, through conglomerates known as chaebol, in revitalising their economies while still managing to protect the domestic sector show just how contingent implementation can be on interpretation and context.

One might loathe accepting this reality, but India, or any other nation state for that matter, no longer exists in a social, economic, or political vacuum. We influence our neighbours just as much as they influence us. Their culture and traditions mould and shape our practices and customs. Their crises spill over our borders and become the origin of a proxy war that can last for decades. The traditional image of villages as self-contained units that are capable of meeting all their needs might not hold water any more; after all, there is no way to definitively determine what constitutes as need and what constitutes as want. Villages, cities, and nations alike have become part of a vast network that is consumptive and productive in equal measure. Thoreau might have pulled it off, but most of us have become utterly mired in a cesspool of excess consumption and wasted resources.

The world is constantly engaged in a struggle to renew itself and hold onto the past. When one cares to look at it that way, regret and nostalgia are equally futile. Therefore, there is a need to reclaim notions like Swadeshi and Swabhimaan from jingoists and rid them of rhetoric, selfish interests, and their unnecessary historical baggage. We must cast old ideas in a new shell and rejuvenate the debate surrounding them so that in light of fresh and contemporary ideas, like sustainable development and networked economies, our understanding of them is not merely a reflection into the past, but a peek into the future as well. I guess that is the conversation that Bapu would have wanted.

The Case for the Lungi (and Against Pants)

Gasoline Will Be Free