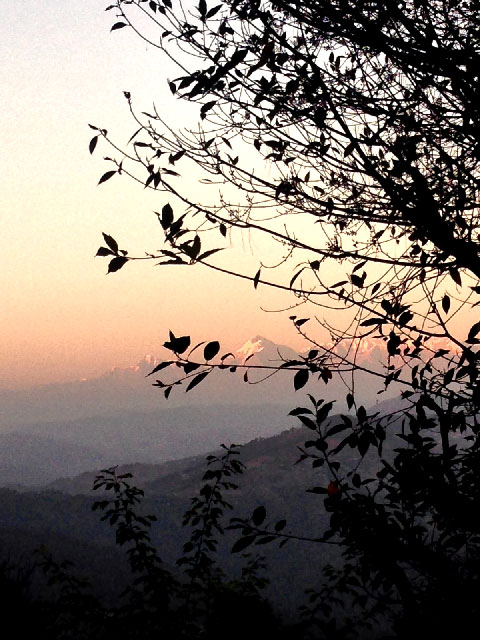 The separation of a mother from her children is a pain incomparable, for how can one describe what it’s like to love someone with ferocity even before they are born? Their dependency on their mother is so sharp and so sweet that it further intensifies this ferocious love, such was the condition of Tara, when she rode to the big town to meet her children.

They pounced on her with violent affection, and she took them in her arms, and her heart was heavy with emotion.

“They’ve been on their best behaviour,” Tara’s mother walked into the living room, holding a glass of water, “I didn’t even have to remind them to bathe today.”

Tara took the tray from her mother, placed it on the glass table, and hugged the elderly woman who smelt of jasmine hair oil and felt airy, like a feather. She’s smaller than I remember.

“Ma, have you lost weight?” With her mother, Tara spoke in Kumaoni.

“Running behind these two, that’s bound to happen, no? Charu, Neeraj, come now, stop bothering your mother and let her rest.”

“What strange language are you speaking in now?” seven-year-old Charu said. “Speak in Hindi so we can understand.”

“What do you expect, living here, the school doesn’t teach them. All their homework is in English. Neeraj still understands though, don’t you Neeraj?”

The boy, shy of ten years, nodded with pride.

“Well, I think it’s a silly language. I don’t like it,” Charu said.

“My moon and my sun,” Tara beckoned them to come to her, “tell me all about your school. Are you studying for exams?”

Charu bounced onto Tara’s lap and clasped her tiny arms around Tara’s neck. Neeraj sat next to his mother, his smaller hand wrapped in her larger one. Tara missed the gentle music of her village. Photograph by Nikhil Gulati.

“I study for my exams everyday and I do all my homework,” said Charu.

“I study for all my exams too,” said Neeraj.

“No, you don’t. Mammi, he’s lying. He comes home and watches Doremon.”

“You be quiet. That’s the only show I watch, Mammi. I study after that. And should I tell Mammi about your bed-wetting? She still wets the bed and then she cries like a baby.”

“No I’m not, stop it!” Charu’s smile was now upside down, her bottom lip quivered.

“Enough, you two. Neeraj, stop bothering your sister,” Tara’s mother raised her hand as if to slap him, and he scurried away. Charu ran behind him.

“We’ve been through this already, Ma. Hitting spoils the children, they lose their sense of right and wrong. I don’t want my children doing the right thing out of fear.”

“Well, I may not be as educated as you, but as long as they are living under my roof, I’ll do as I please.” Tara had only studied till the sixth standard, and her mother, in moments of disagreement like this one, regularly resorted to reminding Tara of her limitation. The words stung every time.

“Fine. I give up. You win. Hit them for all I care. You are raising them after all, being a fine mother I am sure, much better than I could be.”

“Tara, you’ve only just arrived, let’s not fight. I don’t have the energy.”

Being a daughter, Tara thought as she shuffled her duffel bag into the bedroom, was much harder than being a mother. She hoped that her relationship with her children, when they grew up, wouldn’t be as strained as this one.

Tara saw much of herself in her daughter. Like her mother, Charu was chatty, restless, and openly affectionate to those she cherished. Neeraj was more like his father: quietly caring, reserved, his actions dictated by his mind. Like his father, Neeraj was a pleaser, saying what those around him wanted to hear.

She’s my mother. She raised us and now she’s raising my children. I should be thankful instead of taking her for granted.

By the time Tara had unpacked and bathed (she donned a kurta with tights, something she would never wear in the village), lunch was almost ready. On this Saturday afternoon, Charu and Neeraj watched cartoons on television, while the noises of town life created a constant cacophony that bothered no one but Tara. Barking dogs and honking cars replaced the chirping birds of her village. Vendors advertised through signature calls, their carts rumbling by houses packed tightly next to one another. At times like these, Tara missed the gentle music of her village, starting with the drums that echoed every morning, which was so unlike this town. Here, each sound competed with the next one to be louder, harsher, more visible in the town’s aural fabric.

“Charu, Neeraj, why don’t you help nani with lunch?” The children sat silently, transfixed to the screen in front of them. Tara switched off the television.

“Nani, do you need help?” Charu ran back to the living room while Neeraj stayed in the kitchen. “She doesn’t need our help. Can we watch the show again now?”

“No,” Tara scooped up her daughter, “first, tell me about your friends.”

Tara froze. How could she protect her daughter from this world full of strange and evil characters? She vowed to speak to Payal’s mother later, but at this moment Tara was relieved that her daughter had heard the secret and not participated in it.

“Beta, has anyone tried to be your boyfriend?”

“Chi, boys are gross, I never want a boyfriend.”

Tara hugged Charu, tightly, and held her close to her chest.

“You want to know what my secret was?”

“That bhaiya can’t breathe sometimes and when he’s going to die we take him to the hospital.”

“What makes you think Neeraj bhaiya is going to die?” Tara still remembered the doctor’s words after her firstborn wasn’t crying right. He had a hole in his heart, the doctor said, and because he was weak, he couldn’t live in the mountains, where the hills were steeper and the air was colder. Tara stayed in the village and her children moved in with their grandmother. It was a decision that had pained her immensely.

“Who told you that?”

“Bhaiya told me. He said he’s going to die one day when he can’t breathe.” Charu held her breath to demonstrate what happened when one couldn’t breathe. Her eyes wobbled up into her skull, her hands flailed, her puffed, air-filled cheeks moved to soundless words.

“Yes, I’m sure. He’s going to live a strong, healthy life and he’s going to get married.”

“He’s going to have a girlfriend?”

“I don’t know,” said Tara, kissing Charu on the forehead, “we’ll have to ask him.”

Over the next few days, Tara spent a great deal of time with her children, bathing them and feeding them and teaching them and putting them to sleep. She spoke to Payal’s mother who defended her husband’s innocence, and she spoke to Manisha’s mother who had shifted Manisha to another school. Tara helped her mother with the cooking and cleaning, because it was the least she could do for the woman who protected her children when Tara couldn’t.

Tara spoke with Neeraj and Charu about saying no, and she took Neeraj for his physical check-up, where the doctor said he was perfectly healthy. She missed Shyama and her husband and she spoke to them every evening, but her heart and the objects of her longing were united here, and she enjoyed that more than anything. After a week it was time for her to go home. With painful self-control, she tore herself from the wails of her babies and on the bus ride back to the village, nursed her wounded heart.