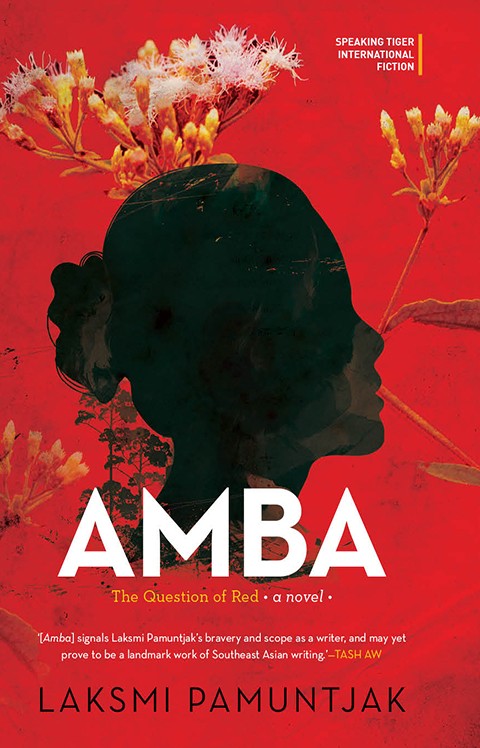 Laksmi Pamuntjak’s debut novel Amba: The Question of Red is an ambitious work. An adaptation of the Amba-Bhishma-Salwa episode from the Mahabharata, it is set in the Indonesia of the ’60s and the ’70s, and then the late 2000s, chronicling this turbulent time in Indonesia’s history. In the book, the protagonist Amba sails to the Buru Islands to look for her lover Bhisma, who is rumoured to be dead. The narrative then slowly unfolds, detailing the events that led to her search.

Pamuntjak’s prose flows and is incredibly easy to read. Her descriptions are full of vivid imagery, and it is a testament to the author’s skill that she describes emotions and places with equal ease, whether it is the passion and complete surrender of a torrid love affair, the despair and acceptance of unrequited love, or a sense of loss and betrayal. A mix-up of different styles—dialogue, narration, and letters—makes the book ever more readable. Every time a new character is introduced, we get to peek into their childhood, and she describes not only the domestic turmoil they grew up with but also the landscape and political climate of the time. This gives her characters a solid background and personal history and thus helps us readers see them as flawed human beings like the rest of us. A sense of nostalgia and loss pervades the book. The melancholy slowly seeps into your bones and leaves you feeling sad and lost, especially after her most poignant descriptions. The author’s own familiarity with poetry bleeds into the book and works well to complement the narrative.

Amba details the tussle between the communists and the so-called nationalists in the Indonesia of the ’60s and ’70s; the uprisings and riots, the wanton killings, the hatred that shattered so many lives. It provides a remarkably well-researched insight into the conditions of Sukarno’s internment camps for communists that broke people’s spirits (and backs) while they existed, and left broken families, dreams, histories, and households in their wake. It also talks about the institutional racism and divides left behind by the Dutch colonisers. The author has painstakingly referenced all her research at the end of the book, and it is remarkable.

However, what starts out as a completely feasible set of events soon acquires a touch of the impossible, and it is mostly unconvincing. Laksmi Pamuntjak embarks on the arduous task of trying to make her audience empathise with her flawed and petty protagonist, but it is in vain. Amba comes from a respected and well to do family, is smart and well-read, has reasonably liberal parents, and a fiancé (whom she doesn’t love). Yet she is petty, selfish, and extremely stupid, and has not one redeeming quality.

Every choice her protagonist makes is one of cowardice, guided not by logic or reason but by jealousy and self-doubt. It raises the question of why anyone would want to empathise with a character so phenomenally unaware of the history and changing times that she belongs to, all the while choosing to worry about whether or not her lover has noticed her jealousy. The one time Amba shows any bravery, it is a reckless act. The one time she has a chance to actually understand love as more than a fire in her loins, she conveniently chooses to look away. By the end of the book, I was hoping that someone would knock some sense into this character, but her stupidity is in fact put on a pedestal. She has some pangs of self-realisation, but it is too little too late.

The narrative is peppered with sexist lines such as: ‘… Amba loved her [mother] in the way most daughters loved their mothers: as tutor, role model, caretaker, and someone who taught her to cook, clean, sew, and look after her sisters’ and ‘… yet girls, even strong and willful ones, will be girls’. What makes this doubly interesting is the fact that the author pretends really hard to make the characters sound feminist (they call themselves ‘brave’ princesses instead of ‘shy’ princesses). In this way, the book pays lip service to feminism while upholding all the patriarchal values it is seemingly against. I tried to rationalise these lines as a description of the times, but since they are narrated not from the point-of-view of the characters but the narrator, I can’t help but conclude that the author means every sexist word she writes.

The protagonist has beautiful sisters, and the author leaves no stone unturned to tell us about how this beauty is as much of a bane as a boon. The author goes on to unabashedly slut-shame the beautiful sister, saying things like, ‘… she had no idea whatsoever of what it meant to keep a healthy distance from members of the opposite sex’ and ‘Hers was a body that responded completely, effortlessly, to the male gaze’. It is even more interesting to note that the child in question is 11 years old.

The book goes on and on about the pitfalls of being pretty, yet men keep falling in love with Amba, and for all the wrong reasons. They all want to save her, and she is completely okay with it. Towards the end, one of the men even says something to the effect that Amba has succeeded in life because she has managed to raise a child despite all her trials and tribulations. In one instance, Amba attends a political funeral, but can only think of the prettier woman who has her lover’s attention, and whether or not she appears pretty enough.

The author emphasises, over and over, that every time a story is told, it is an effective retelling of the story. Yet, in her own retelling, she fails miserably. The story is hardly new or reimagined. Be it dreams that tell you of a past or present you cannot possibly know, or mystical powers that enable you to not feel pain, to Bhisma’s super power of choosing the time of his own death, she hardly changes anything. Despite her characters trying their mightiest to change the destinies their names have burdened them with, they ultimately fail (and how!). In this, it is unclear what message the author is trying to convey.

The Right Kind of Waiting

The book goes on and on about Bhisma’s work, how he is helping save lives at great personal cost and how he really cares. Yet, even though it is mentioned that Amba is good at what she does, her work never gets space in the novel. It is incidental, a sort of way to propel the narrative forward.

The star-crossed-lover genre is done to death, and this book hardly breaks any new ground. The story barely makes any logical sense (even allowing for creative freedom). There are coincidences galore, everyone knows everyone, and it’s glaringly obvious that the star-crossed lovers could have found each other had they made even a cursory attempt.

All in all, this book is an eminently avoidable read. If you enjoy flowing prose with a lot of poetic references, you may yet enjoy it. Otherwise, you are much better off with a Khaled Hosseini.