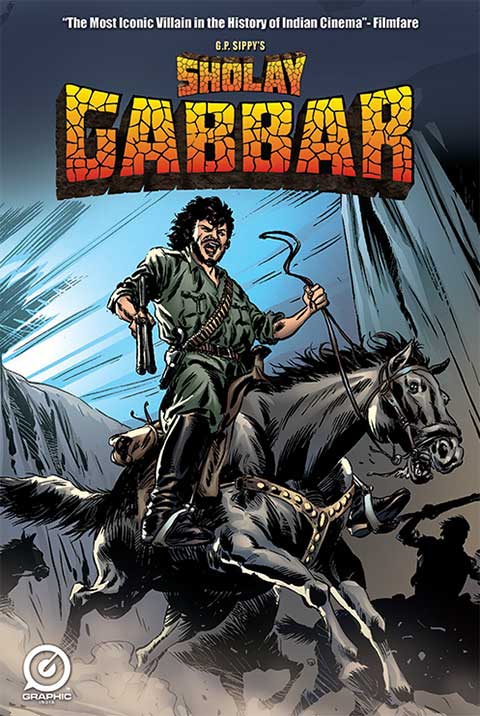 The Groom and the Dog

Gabbar, a recently released graphic novel from Graphic India, pays tribute to an unforgettable character from Indian cinema, exploring the origins of an iconic villain whose lines have not been forgotten in the 39 years since Sholay (1975) was released. The book contains one long narrative about Gabbar, and seven shorter sketches involving other characters from Sholay. Setting out to celebrate the brilliance of the original movie, the graphic novel delves into various aspects of the original: the dark, the comical, and the melodramatic. On the whole, the stories are able to recreate the dynamic ethos of Sholay by giving voice and space to the different players in the plot, from the Chambal dacoits to the police inspector out for revenge, including the dancing Basanti.

The graphic novel begins with Gabbar’s childhood, taking us back into the Chambal wildlands where the real-life dacoit who inspired his character hailed from. The writers have created a convincing portrait of a young Gabbar who is moulded by the violence and crime surrounding his community, as he eventually transforms into the dacoit portrayed in the movie. The narrative moves between his remembered childhood and his time in jail, where the jailer asks him for his story, the one that goes beyond the police records. Reaching into his past, Gabbar evokes the troubled landscape of Chambal in the 1950s. His father is a man who serves the reigning dacoits at the time, storing ammunition for them. “So Gabbar grew up with Bhairav Bhagee’s guns for brothers. We are all shaped by our families, aren’t we?”

Shaped by violence on the one hand and his father’s fear of the dacoits on the other, Gabbar realises early on that he prefers action to passivity. When his father is slain by the dacoits, Gabbar sets into motion a plan for revenge that changes the course of history for the entire district. The story follows his ascent to becoming the most notorious dacoit Chambal has ever seen. The script is as much about the unravelling of innocence as it is about the cyclicity of violence: “Any story of the ravines of Chambal is a story of revenge.” Sympathetically portrayed, Gabbar becomes more than the quintessential villain, he occupies a much richer, a much more humane personality.

See Also
The Oracle of Tripe

The visuals in this segment are dark and subdued, bringing to life the pathos that underlies the thrill that surrounds the character of Gabbar. The dimly lit police station, the officers in plain clothes are realistically depicted. Gritty illustrations bring out the rough, angular embodiments of anger and violence that the dacoits are, while the muted colours recall a dark, yet exciting era in Indian history. The artwork is powerful and effective, using silhouettes and close-ups to penetrate the grim reality of Gabbar’s life.

Each of the seven stories that follows is illustrated differently, and this works to bring out the various moods and emotions from the movie. The Ballad of Mehbooba shows the dance and the explosion that follows from the dancer’s perspective, a welcome departure from the movie where she is little more than an entertainer of men. Samba: How Many Men Were There? is an intense, frame by frame retelling of what is arguably the most famous scene in the movie. All in all, the graphic novel lives up to the movie it idolises, and is definitely worth reading if you’re a Sholay fan.

Book Review: Gone with the Vindaloo