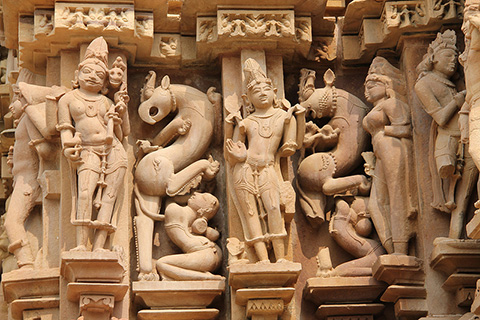 My mom has thrown away my Kama Sutra book. At least that is what I think happened to it.

I remember the first time she came upon it. We were in my room, cleaning out my closet. She insisted on helping me. I didn’t really have a lot to hide at the time, as most of what was hidden was on my laptop, but there was a bright, pink thong. And that book.

She came upon the piece of lingerie first. “Well, I bought it for the paintings.” Photograph by Seba Della y Sole Bossio.

“What is this?” she held it up with her thumb and fore finger, as if afraid of getting tainted.

“Why do you wear this? Does it even cover anything?” she shook it in my face.

I had never actually worn it but had bought it on a whim, with other underwear. Those three-for-25 sales.

She shook her head, and kept it back where she had found it.

A few minutes later, she chanced upon my Kama Sutra.

“And what is this?!” she sounded angry.

“A book,” I felt a little guilty for even owning it at the time.

Well, to be honest, it had been on sale. I had walked into a bookstore and there it had been, on the “sale” table. It wasn’t even an actual sex manual. More like a large coffee table book with paintings of naked limbs in hues of dark, passionate red.

“So you bought it?” she demanded.

“Well, I bought it for the paintings,” I finally admitted.

That was six years ago.

In those six years, we had moved to a new house. I had acquired new shelves for many more books, including anthologies of erotica, some of which I displayed openly on my shelves. Some of which I had even offered to her, saying, “read this!”. She hasn’t taken me up on my offer yet.

So today, with the heavy downpour outside, I remembered those paintings. I wondered who the artist(s) had been. A burning desire to know came upon me. It took hold of me, until I had to give up whatever I had been doing and went to look for it. But the book… well, the book was gone.

Books don’t just disappear, I reasoned, as I searched everywhere. It couldn’t have just grown a pair of legs and walked out of the house. It couldn’t have been stolen, the sheer size and colour (it has a tide safedi type white cover) a deterrent. I know I didn’t lend it to anyone. Then where was it?

I knew that the book had been kept aside with many of my other books till my dad had installed the new shelves. Since I had been away from the house, living in another city at the time, my parents had filled the shelves with those books. The shelves were located in my “writing room” (as I called it) in the basement.

I went downstairs. I switched on the lights. I perused my shelves. The book was not there.

I sighed. I had looked everywhere. There was only one explanation for it.

“Did you throw away my Kama Sutra book?” I asked my mom when she came back that evening.

“What book?” she looked confused.

I patiently described the book and the details of her aversion during her first encounter with it.

“Why would I throw your book away? Do I have an enmity with your book?” she defended herself.

Since I know my mom would never lie, I am left unsure. Had my father gotten rid of it? But why would he? Did someone steal it? But why?

The absence of the book doesn’t bother me as much as the loss of the book itself. I could, of course, just order a used copy from Amazon, but the book would not have the personal history I had with my previous copy. That history would be lost.

Also, I had just wanted to know about the artist(s).

Turn your hell into heaven, my mind said. Google!