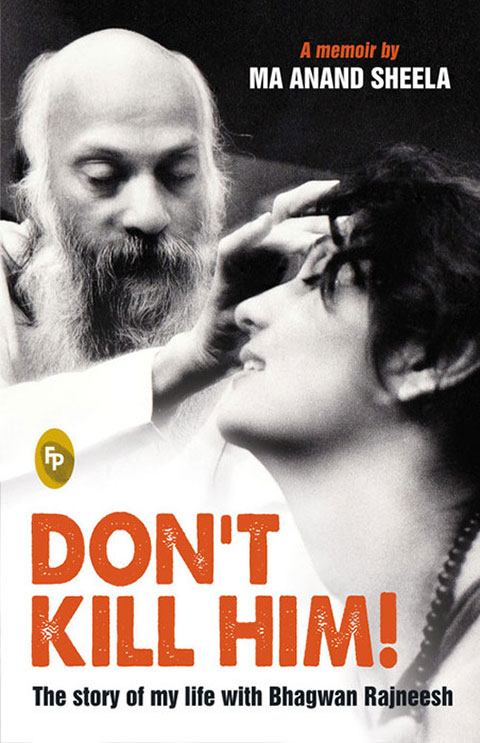 Don’t be fooled by the title: this book isn’t about an assassination attempt on Bhagwan Rajneesh, a.k.a. Osho. Written by Osho’s second-in-command and once prominent Rajneeshee Ma Anand Sheela, the book is really about the years that she spent with him, helping Osho set up Rajneeshpuram, a commune in Oregon, U.S.A., and expanding the reach and message of his philosophy. Don’t Kill Him!: The Story of My Life with Bhagwan Rajneesh (Purchase)

It’s packed with details about her controversial flight from Rajneeshpuram, the subsequent bio-terror charges levied against her, her time in prison and, later, as an exile in Europe. Through all this, she claims, she never stopped loving Osho and never stopped following his teachings.

Now why, any sane person would ask, does Sheela continue to ‘love’ Osho and respect his teachings even after he accused her of bio-terrorism and was responsible for her stint in prison? Unfortunately, there’s no convincing answer to this question, as Sheela is quite evasive when it comes to describing exactly what was so appealing to her about Bhagwan and his teachings. However, she does try very hard to establish how deep her love for him was, employing every cliche of romantic and spiritual love. Take, for instance, this scene where she describes her first meaningful encounter with Osho:

“When I entered the room, Bhagwan looked at me, smiled brightly, and opened His arms. He invited me to come up to Him. I let myself fall into His arms, full of joy. He held me to His chest for some time. It seemed like an eternity. Then He let go of me gently and held my hands. I put my head on His lap. Then I looked at Him with a completely dissolves heart and melting look. Bhagwan began to talk with my father. And I just sat there, drowned in Him, lost in Him. I heard everything that was spoken, and yet I heard nothing. I was there and yet I was not there.”

It’s not the banality of the description that bothers the discerning reader. It’s the fact that there’s not even an attempt to understand why she felt this love. Sheela seems to take it for granted that her readers will understand and appreciate her love just as she describes it. Clearly, introspection and reflection is not the point of this book.

So what is the point of this book? If you try and read up on Sheela and the Rajneeshpuram debacle online, you’ll start getting your answer. The Internet is not kind to Sheela. She’s clearly painted as the main villain of the bio-terror attack on The Dalles. There are pages about how she tried to rig the local county elections so that only candidates who were favourably inclined towards the Rajneeshpuram commune would be elected. You will even come across a video of a rather entertaining interview with an Australian T.V. journalist. However, what you won’t find is Sheela’s version of how events went down in Rajneeshpuram and what really happened after she left (or fled) the commune.

This book, she states, sets the record straight. The allegations levelled against her—of bio-terrorism, assassination attempts, and wire-tapping—were done out of spite by Bhagwan because he wanted to teach her a lesson. And, she says, she did not ‘flee’ the commune. She left, after resigning her position as Osho’s personal secretary, along with a few other Sanyasins.

You may or may not believe Sheela’s version of events, just as you may or may not admire Rajneesh and his philosophies, but at least Sheela’s version of events is now out there. Too bad she finds it unnecessary to examine her own motivations and feelings towards Osho more deeply and honestly. As it stands, this book is unlikely to make a dent in the beliefs of Osho’s still fairly numerous followers.