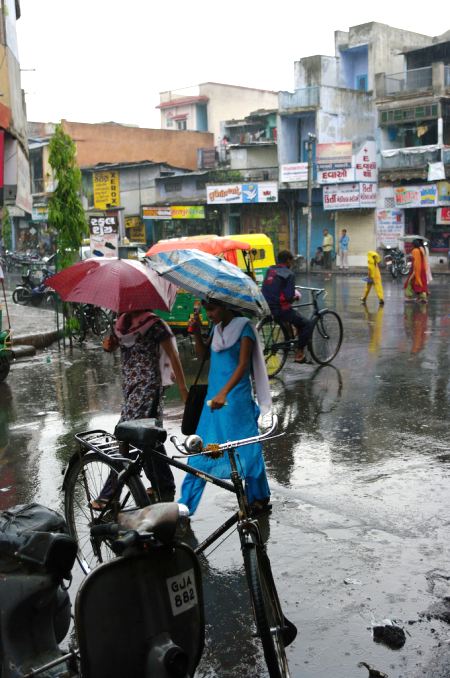 I opened my eyes
And looked up at the rain,
And it dripped in my head
And flowed into my brain.
—Rain, Shel Silverstein

The season of dreams in my country is drawing to a close. Eyes pregnant with expectation are trained skywards, scanning the heavens for a sign that will tell them that the long, exacting summer has been finally laid to rest. But the monsoons are not so benevolent. They do not let me into their secret garden so easily. Just like the temperamental lover you can neither live with nor stay without, they will make me grovel and beg, and when the hope in my eyes is laced with indignity and surrender, they will overwhelm me with their love, winning me over completely. Yet again.

The last few weeks are always the most difficult. Months of tormenting heat have parched the leaves by now. The grass is shrivelled up and yellow, stunted by submission. Even the squirrels appear to be more strung up than usual. As temperatures soar all over the country, conversations seem to dwell on just one subject—the tantrums of the impending rains. News shows talk of people dying due to the prolonged heat wave, perhaps hoping that the plight of their poor countrymen will somehow convince the favourite gods to change their minds. Politicians, having themselves assumed the role of gods in certain parts of the country, assure their supplicants that there is nothing to worry about while they frantically consult more knowledgeable people at night regarding weekly weather forecasts. My mother, sitting rather comfortably in her air-conditioned room, complains about the 48-degree days while the help sweats it out in the kitchen. Instead of fighting the country’s erratic rains, people have made their peace and learnt to take them in their stride. Photograph by Emmanuel Dyan.

Dusty windstorms are often the vanguard of the first tropical showers. The monsoons, realising how they must put up a spectacular show in order to impress the faithfully devoted and have them keep their fingers crossed the next year, herald their arrival with thunder and pandemonium in one of the most extravagant displays of authority and arrogance. As tree branches grumble, threatening to snap and shed their burden of responsibility, and windows rattle alarmingly, minions are instructed to bar them, lest they let in the dirt and grime of the streets into the clinical confines of plush ‘3-B.H.K.’ apartments. I remember my sister shouting for help as she frantically tried to grab the clothes drying on the terrace before the rains could deprive them of the crisp sunny smell that makes the rigmarole of washing worthwhile. Further down the road, yellow and blue barsaatis are blown off the roofs of makeshift huts, leaving one to wonder whether Nature is indeed the greatest leveller.

The fanfare subsides after an exhausting exhibition that might last a few hours. What follows next can only be described as subliminal. The heat and dust of the summer months is dowsed by the first few apprehensive raindrops. The dried and cracked mud is stripped of its obscene cover by the winds who have gotten tired of the baggage they have towed so far away from the seas. The raindrops fall, at first with much trepidation, but soon two old friends renew their love and they gleefully bathe the earth in their freshness. As I sit beside the window, munching on some pakodas, I wonder if there is word for the smell that has assumed control of my senses. I am at a loss, for it has become a physical entity and it is possible to taste it in my mouth or feel it on my fingertips if I care to reach out for it. I breathe in greedy lungfuls with the hope of saving some of it for a rainy day.

There is enthusiasm and hope in the air. The raindrops are cautiously trying to trace out abstract patterns in the happy puddles that seem to have sprung up everywhere while the steady breeze is doing its best to deter them from doing so—both of them constructively engaged in a game of search and destroy. The leaves now gleam and shine in pride of their new rich covers, dancing in rhythm to the howling of the wind, while the drainage pipes groan under the weight of this sudden onslaught. The distant skies are coloured grey, with a dash of red, and the stagnation of my country’s summers has been washed away without the slightest hint of a protest. The streets are abuzz with activity: people running helter-skelter, trying in vain to escape being drenched; loners peeping out of their pigeonholes to get a low down on this natural spectacle; little boys dancing on the roofs, topless and carefree; and lovers shyly sharing the quintessential hot cup of tea under the chaiwalla’s tin roof.

But unlike most fairytales, this one has a sting in its tail. The romance of the first few days perishes in the wake of overflowing drains and sewage clogging the roads of haughty metropolises. Some people will probably tell you that in my country nothing comes without a price. Photographs of half-submerged buses and cars, people trudging alongside them through knee-deep waters with a very grim expression on their faces, littering the front pages of newspapers across my country seem to validate that argument. As municipalities struggle with choked storm drains, multi-coloured raincoats are dug out of old steel trunks for kids who will probably end up ditching them on their way home from school. In the remote and exotic North-East, the mighty Brahmaputra has breached its banks and submerged over a thousand villages. As little boats scurry over muddy waters with the villagers’ meagre belongings, Ministers from the national capital make an aerial inspection of the flood-affected areas, thinking of ways to scam the citizens out of yet another relief fund.

Over the next few months, the rage and intensity of the initial outpour peters down to a daily drizzle in the afternoons or evenings. Instead of fighting the country’s erratic rains, people have made their peace and learnt to take them in their stride. The markets have been inundated with a zillion varieties of that most Indian of all fruits—the mango. The rivers look plump and healthy, waiting patiently for the filth from the cities to invade their mythical sanctity, and civic authorities have finally managed to get the drains in working order. Displaced farmers in Bihar and Assam are returning to their homes and with the floods having given their lands a fresh lease of life, even they have a reason to smile. The rains have washed through several months of grumpy moods and sullen nights. It has become customary to feel upbeat, even if only for a while.

The story of the monsoons is somewhat like the story of my country, where senses and sensibilities are constantly overwhelmed, and then subjugated. But at the end of it all, if one is left wondering what will be in store the coming year, they have done their bit in making our lives a little interesting and infinitely more unpredictable. As our cherished dreams are shattered and mutilated beyond redemption in mundane everyday struggles, the monsoons replenish the reservoirs of our hope and give us the strength to face those very battles once again. After all, if it were not for the heat and dust of my country’s summers, would we know how to appreciate the spectacle of the rains?