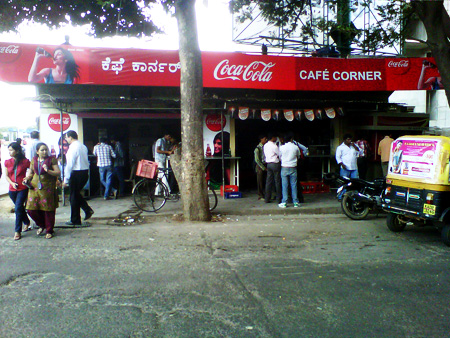 It is lunch hour in Electronics City, Bangalore, and the place is literally swamped with customers. There is hardly any room to stand, let alone to have a peaceful meal and relax.

Patrons have spilled over onto the adjacent street, much to the delight of the neighbouring cigarettewalla, where horns are being honked in a manner that is unmistakably (and unforgivably) Indian. I narrowly avoid being run over by another zealous cab driver as I cross the road. Scores of smouldering cigarettes fashion an addictive haze of nicotine that hangs dotingly like a poisonous cloud over our heads. I squeeze through the crowd thronging the cash counter and wait for the Coffeewalla to finish haggling with a eunuch before informing him of my meagre and humble needs. “Ask Chhotu, you know, my second assistant. He is in charge of the kitchen supplies. He will know if there is any half-litre packet,” he tells me absentmindedly, directs me to the third-in-command, and then goes back to managing the counter. I don’t think he is very trustful of the eunuch.

Unlike most Hindi movies, Chhotu is not some kind of a misnomer and indeed refers to the youngest worker in this run-down, albeit efficient, establishment. Behind a glassless opening in one of the walls, he is deftly serving sambhar and rice and I feel a bit nervous about disturbing his steady rhythm. The heat in the kitchen is suffocating, made all the more unbearable by the strong odour of the umpteen spices, a generous smattering of which flavours almost all staple south Indian dishes. A blast of hot air greets me as the stove under the ‘coffee–cauldron’ is turned on and I can feel beads of sweat lining up against the collar of my shirt. This is no romantic setting but that is hardly a concern for any of the cooks or the workers. Mostly dressed in grey or blue (it is hard to tell which one) shorts or ‘mundus’ and grimy vests, they go about their business with mechanical efficacy.

“Err, Chhotu, aadha litre milk packet hai kya?” I ask him, trying to hide in a corner at the same time, lest he decide to take me to task. These people don’t take ignorance of the vernacular very lightly.

“No half-litre packet,” he replies curtly and goes back to ladling several multi-coloured liquids into an equally large number of small steel bowls. I sigh dejectedly and make my way back to the hostel. My place near the serving counter is quickly engulfed by a sea of eager customers.

I don’t drink tea. I don’t drink coffee either. But I do have a weakness for milk and that is how I came to know the Coffeewalla. He is the proprietor of a diner—Café Corner—that serves south Indian food, along with bucket loads of tea and coffee, in a busy corner of Electronics City. Apart from breakfast, lunch, an early dinner, and beverages, there are vadas, idlis, and samosas to be had at any given hour. (I would suggest staying away from the samosas.) Given its close proximity to that factory of information workers known to most people as Infosys, Café Corner does not know lean business. If it’s not the I.T. clones, dressed smartly in expensive shirts and trousers, every bit the arrogant pricks that their privileged status commands them to be, blue collar workers from the nearby construction sites or the staff that actually runs the offices in Electronics City can be found milling around its premises from the time it opens shop at seven in the morning till the shutters are pulled down at eight in the night. And as long as the rivers of tea and coffee keep the sleep-deprived hydrated, there is always milk for the health conscious. *Cough*

Despite the fact that a significant faction of his clientele are Kannadigas, the Coffeewalla speaks Hindi fluently. I suspect he is equally proficient in English too. I am, on the other hand, ashamed at my own ignorance of anything but the Kannada numerals. Even in that department, my know-how takes a serious beating halfway through. I have never had to buy more than five cigarettes, after all.

“It’s been two years, Sir. You should learn to at least ask for directions,” he had once advised in a big brother fashion. “You won’t even know how to get home otherwise.” He had looked quite serious and so I had nodded gravely and asked him how to ask for milk in Kannada. Obviously, more important things needed to figure prominently on my list of priorities. For my benefit, he had written down the words in English, spelling them phonetically, and had made sure that I got the pronunciation right. If only adults could learn new languages as easily as children. This is what the Coffeewalla looks like without his ample beard. The author suspects he had a business meeting on the day that the photograph was taken. Photograph by Siddhartha Lal.

One evening, I had come across the Coffeewalla struggling to kick-start his antiquated Yezdi Roadking. It looked as if the lumbering leviathan had begun falling to pieces even before he had acquired it from his Mama ten years ago. Even its registration number—CNA 1077—seemed to belong to a state that had been overwhelmed, and subsequently subsumed, by the whims of Indian bureaucracy and petty politics. But no one had been able to convince him to ditch that mechanical abomination in favour of something more faithful and reliable. Over the years, I have learnt that reason doesn’t stand the slimmest chance against emotions and sentiments.

“You remember I told you I was writing an article about Café Corner for a magazine? I needed to ask you a few questions. Just so that I can get the facts straight.”

“Is that an advertisement?”

“No, not an advertisement. Just an account of how things work here. It is not a big deal, actually.”

He hesitated for a moment but then instructed Chhotu to try his luck with the Roadking. Chhotu, who had been loitering nearby with his eyes brimming with hope and expectation, was only too eager to oblige. As he initiated the monkey routine and started jumping up and down on the bike, well, I got some of my ‘facts straight’.

It doesn’t look like it, but the Coffeewalla has a Bachelor of Fine Arts (B.F.A.) in Commercial Art from the Karnataka Chitrakala Parishath. His dense, but neatly trimmed, beard and gigantic physique belies the artistic spirit that must lurk somewhere underneath the rough exterior.

“Then why don’t you draw or paint?”

“What am going to do? Paint hoardings and billboards for a living? Besides, I am rather short-tempered. I can not work for someone. Even in college, I was always getting into trouble. I chose to start a business so that I could be my own boss.”

“So how long have you been living in Bangalore?”

Thereafter, of his own accord, he proceeded to tell me about all the different places where he had apprenticed before landing this lucrative deal. I remember just vague details now as I didn’t have a paper and pen on me at that time. Down the 1st Main Road for 10 years, five years near the Police Station. So on and so forth.

“Where were you before all this?”

“In my village, of course,” he said matter-of-factly and looked at me as if I had committed sacrilege. Anglicised twerps like me often fail to make the most basic of all assumptions.

Today, after lunch, I made my daily pilgrimage to Café Corner. I was running a little late and the office-going crowd had thinned out. The Coffeewalla was counting wads of cash. Despite all his claims to the contrary, business was good. As I approached the counter, he greeted me with a smile.

“Did you have your lunch?”

The question had become some sort of a ritual. We both already knew the answer.

“Yes,” I reciprocated the smile. “I have had my lunch.”

“Good. And no cigarettes today? You are becoming a good boy. Students should not smoke.”

I believe we share a unique bond. The big brother analogy is not entirely unsubstantiated.