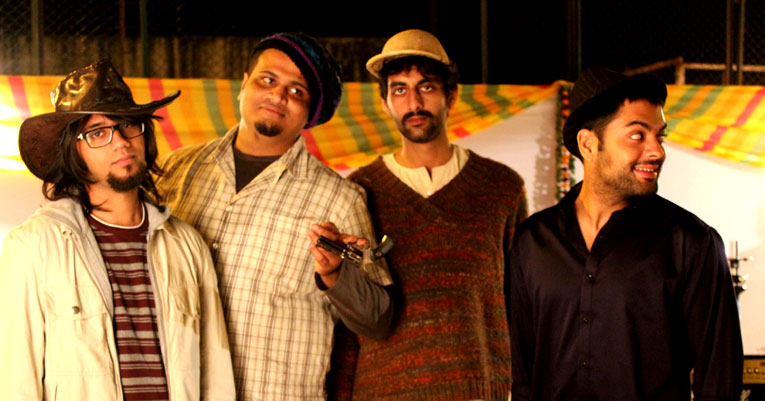 Peter Cat Recording Co. are probably the most important band to come out of the Indian indie music scene in recent years. Their songs sound like life’s classroom backbenchers’s takes on love, played to the simultaneous background score of many Golden Era Hindi movie scenes.

Their impending second full-length album (out, hopefully, in March) should be causing anxiety attacks in a world that ‘loves music’, but frontman Suryakant Sawhney still finds the time to answer interview questions about parents, cutting an album, and planning a tour of northeast India with Peter Cat Recording Co. Read on for excerpts— Movies clearly have a lot of influence on your music. How did studying film come about?
Post high school, I was desperate to travel to a different country for a bit and I happened to get a partial scholarship to a university in San Francisco under the ignorant impression of studying 3-D animation. On arrival I realised that sitting in front of computers was definitely not going to work for me and switched my major to film impulsively. It was really a matter of me sitting there thinking of film as a career, right for the first time as I went through the curriculum. So I made the move but as time passed, I spent less and less time devoted to college work and more time on writing my music. So in a sense, the fact that I learned making music and filmmaking simultaneously resulted in this development. What was it like, readjusting with a change in lineup and country? How different were the way that songs came about in the two settings?
Actually, I didn’t have a lineup in San Francisco. My friends, Jeffrey Abplanalp and Jeremy Kane and I wanted to start Peter Cat as a band on the basis of some of my demos but we never got an ideal drummer or a serious work ethic in place. That plus serious financial burdens basically made it impossible for us to pursue a San Franciscan Peter Cat Recording Co. So the first proper P.C.R.C. gig actually happened in August 2010 at the I.A.F. Station in Palam in the N.C.R. It happens to be the venue for the ‘wedding videos‘ on YouTube. The initial lineup of Rohan, Andy, and myself formed easily but we peddled between drummers till Karan settled down. As far as the songs go, most were written and almost all were completed in Delhi itself. San Francisco was the birthplace though.

For a lot of the band’s fans, the first brush with your music have been videos of Peter Cat Recording Co. playing at weddings, exuding a very different ethos from anyone before. Did it all naturally fall into place?
In short, no. Although Rohan, Andy, and I had been jamming a short set together, we only found a drummer, Caleb Prabhakar (Fringe Pop, Superfuzz) the night before that wedding gig. So we practised late into the night and the next day we showed up at the Air Force Station’s Gentleman Club for the show. It was being thrown for a friend’s friend’s friend. Long tale short, it was a fucking ridiculous night full of drunk uncles and aunties, Delhi band kids, and just lots of drunk everything. The videos were shot by our friend Bheem (vocalist of Lycanthropia, incidentally the metal band all my bandmates also play for), and the combination of a ’90s V.H.S. camera with its nightshot mode just made it into something sinister.

“Long tale short, it was a fucking ridiculous night full of drunk uncles and aunties, Delhi band kids, and just lots of drunk everything.”

What changes for a band like Peter Cat Recording Co., and for you personally, when critical acclaim pours in about your music? Does it change the way you look at making music?
I don’t think it’s really affected us as much as it affects our parents who could see this as some sort of sign that we’re doing something smart with our lives. Personally, I’m very embarrassed by someone complimenting our music to me in person as opposed to being written about favourably. When drunk, it makes us more ambitious and maybe want to rule over everything. Regarding the music, new sounds and artists appearing all over the world are really giving us new ideas to explore but I do appreciate intelligent gig reviews as it’s impossible to know what your live act really has going for it (or lacks). There are a lot of post-Bollywood love affairs lamented on your album Sinema. How many relationships does one have to go through to become as wise as you sound on some of the songs there?
One for every type of woman in the world or just pretend you’re unlucky in love.

What are some of the Indian bands that you’ve liked in the past? Which ones of the current bands has it been the most fun gigging with?
None. We’ve hardly gigged with current bands but there are definitely some who look like they could be a crazy bunch to play a show with, like Menwhopause.

Have your folks heard your first album? What’s their take on it?
My mother’s not sure but she does think I have a creepy voice. Overall, the nature of the album pretty much makes it impossible for parents to hate it anyway but all the folks have an opinion or two, good and bad.

What’s been the best thing about having an album out? And what’s the difference in inspiration and output between the first and second album?
Albums are very important to get songs out of your system and set some sort of fake deadlines for fake events as a band. Albums ink the deal. Can’t tell you anything about the second album. It’s all very hush-hush.

The past few years have been quite the rollercoaster for the Indian music scene. Where would you like to see it go from here? What’re your plans with P.C.R.C.? Any targets that you might have set for yourself, and as a band?
I’m not sure what you mean by rollercoaster. I just see more venues cropping up but the cities with the venues don’t pull crowds and the cities with an audience lack venues. I don’t know where I’d like to see it go, honestly, but it’s definitely time we began to export more culture outside of our country. As Peter Cat Recording Co., we plan to tour northeast India and then the world. We’re releasing a dangerous documentary and a new album this year at the very least. Shutting down The Times Of India‘s web site is our primary longterm goal.

Do you guys really not read much?
Karan reads up on mythology. Andy reads anything as long as it’s not suggested to him. I read science fiction. Rohan reads movie subtitles.

Download Peter Cat Recording Co.’s debut album Sinema and their new collection of B-sides Wall of Want at this location.