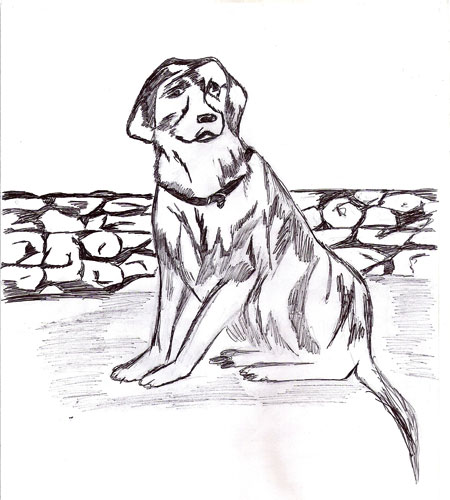 There were no streetlights. A feeble beam from my torch revealed rough-hewn stone steps that fell off the edge of the road into blackness. Some distance below, a glow from a doorway silhouetted a tall woman holding onto an excitable puppy.

She waved, “Come on down and hold onto the railing—the steps are tricky!” Five minutes and scraped shins later, M and I stood in the doorway, shivering a little in the nippy night breeze. The woman gave us a big smile. “Welcome to the ashram. The pup bites everything, so you might want to shut your door if you don’t want him in your bed.” The pup yawned. “He is a baby—we just got him today and he doesn’t yet have a name.” Then she looked at us for a moment and said, “I’ve made you some khichdi, would you like to eat and go to bed? We can talk in the morning.”

We had been traveling for days in trains, buses, rickshaws, and taxis, and had just climbed up a hill with about 50 kilos of luggage. Grateful, we nodded our yes. Ten minutes later we were out cold, long before we realised that the rushing lullaby outside our windows was the river flowing just feet away. Our adventure in Ujeli had begun. Nameless was christened Siddhartha—Sid when he was being yelled at—and slept outside our room on a little blanket. Illustration by ANJA.

Nameless Puppy was evidently strong enough to push the door open, for we woke up to urgent barks and a lot of slobber. I suppose he thought he was the resident rooster for lack of another; it was barely sunrise. Remembering something about the bathrooms being outside, we stumbled out into the splendour that was to be our home for the summer. Our door opened to a view of great mountains rising all around the grassy grounds of the ashram. A musical gurgle and the glint of silver at the edge of the knoll promised cold water swims. It couldn’t have been later than 5.30 a.m., yet the chimneys of the picture book houses on the slopes were puffing merrily away into the sky. We’d been expecting to hear a lot of chanting, bells, community prayers. Instead, we were treated to a minuet of wind and water over leaf and stone.

Uttarkashi is best known for being base camp or pit stop for a number of pilgrimages in the north. It is a small town by the river Bhagirathi in Uttarakhand. Ujeli is an even smaller settlement further up the mountains, skirting the river with its assortment of guesthouses, ashrams, and farms.

The ashram that M and I had chosen was tiny, as ashrams go. Some of the others in the area could sleep dozens of people over long stretches of time, had strict daily schedules, and several house rules. Ours, in comparison, was a breakaway hippie. It had just six living units. We were in the small building halfway down the steps on a flat stony landing. We had half the ground floor—a bedroom and kitchenette that opened into a common hallway. The bathrooms were outside and around back, but we didn’t have to share them with anybody. Ridiculous armfuls of orange lilies lined our front wall, bunches of deep red ixora and blushing hibiscus nodded at our windows.

Our immediate neighbour was a small, quiet woman who read and prayed in her room all day. Above us lived a flamboyant yoga guru dressed in blinding white, accessorised with the latest mobile, Ray-Bans, and motorcycle. Mata, the manager of the ashram, lived in the front section of the unit down by the water. A 35-year-old engineering professor turned philosophy scholar lived in the back. The last unit was a standalone cut into the hillside, where a seven-foot-tall American sanyasi came to sleep at night.

At the centre of the ashram’s grounds, a small temple with a conical roof fluttered an orange flag. Leading off it was a large meditation/prayer room, bare but for two ancient overstuffed bookcases. Short boundary walls made of stacked stones played ramp to the occasional goat, dog, or runaway mule, and were perfectly positioned for a good seat overlooking the water.

M and I had two days to settle in before work officially began. I was going to be conducting workshops in mime and communication through theater for 18-25 year-olds, while M had charge of the younger ones, aged 8-15 and was going to be helping them with English grammar and some of their schoolwork. We had come armed with exercise books and games, masks, funny hats, and skeletal lesson plans. The rest would take shape as we went along. We had been shown the bright pink flyers that heralded our arrival with the optimistic words ‘Learn to speak English!’ A little misleading, that.

We spent our time preparing to deliver the promised fun. We unpacked piles of books and papers onto broad windowsills and weighted them with riverbed stones. We set up our basic kitchen with the pots and plates we’d carried. The milkman came down the mountain road each morning on his thundering vintage motorcycle fitted with cans. We arranged it with him that one of us would climb up to the highway and wait for him there with our jug. English newspapers came a day or two late and were tossed downhill onto our porch with commendable accuracy.

We went on a wild, windy walk down to the village where we bought fresh produce from the farmers’s market. We met with the resident yoga guru and scheduled daily sessions of breathing and stretching. We laid down bright rugs in the large prayer room that would double as a classroom if the weather played spoilsport. M made a list of key words in Pahadi that might be useful. The sessions were to be in English or mime, but my Hindi and M’s list were sure to come in handy. We took Nameless with us on long walks along the riverbank, sometimes stopping to dip our feet in the icy water while he chewed determinedly at his leash.

Before we knew it, the two days were up. Nameless was christened Siddhartha—Sid when he was being yelled at—and slept outside our room on a little blanket. Now, he sat at our feet on the grass, tail thumping frantically. The three of us watched as colourful specks on the road above the ashram descended by the treacherous steps, emerging from around the last bend with freshly scrubbed faces and well combed, curious heads, waiting to see what we were about.

‘U-bends‘ is a series of impressions from a summer spent in and around Uttarkashi, Uttarakhand.