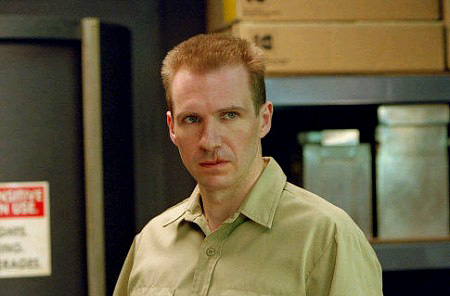 “I’m not frightened. I’m not frightened of anything. The more I suffer, the more I love. Danger will only increase my love. It will sharpen it, forgive its vice. I will be the only angel you need.”—Michael Berg

I usually don’t fall for a movie just because of its star cast. That being said, one of the actors that I have found to be very ‘watchable’ is Ralph Fiennes. There is something very sad about his face; as if it were the perfect portrait of a romance gone wrong. He seems to me the kind of person many of us were fascinated with at some unwise point in our lives. His roles as a jealous heartbroken lover in The English Patient or The End of the Affair and the stiff-lipped British diplomat-husband who literally travels to the end of the world in order to avenge the death of his wife in The Constant Gardener haven’t exactly helped the stereotype. In fact, if truth be confessed, his portrayal of Lord Voldemort in the Harry Potter franchise, the psychopathic killer—the Tooth Fairy—with a split personality in Red Dragon, and the unscrupulous war profiteering Nazi general, Amon Göth, in Schindler’s List are the only roles that I know of that do not confirm to this typecast. (He had an instantly forgettable screen-time as Hades in last year’s Clash of the Titans.) Which makes me wonder: do I happen to like the actor because of how intimately he understands his characters or because they just happen to be oh-so-perfect for this brooding, tormented lover who carries the weight of literature on his shoulders? Despite the apparent confusion, I cannot, for the life of me, bring myself to think of a better person to play someone named Count László de Almássy. But then again, I have my own prejudices and preconditioning.

Sarah Miles (to herself): Sometimes I get tired of trying to convince him that I love him and shall love him forever. He pounces on my words like a barrister, and twists them.

Maurice Bendrix: So what will you do when it ends?

Sarah: You think love ends when you don’t see me?

Maurice: To be is to be perceived.

Recently, though, I got the opportunity to listen to him without my eyes leading me astray. You will probably remember him as The Reader in Sydney Pollack’s movie of the same name. His audio cassettes for Hanna had considerably piqued my curiosity. Therefore, when I came across B.B.C. Radio’s production of George Bernard Shaw’s Man and Superman that had Fiennes doing the voice-over for Jack Tanner, I was, quite literally, all ears. This was the first time I was trying out an audio play and Fiennes’s voice bought Tanner (a radical member of the English upper class who is on the lookout for funds to circulate free copies of The Revolutionist’s Handbook and Pocket Companion) to life. I had always been very fond of his voice and the play made me fall in love with it all over again. Without the visual distractions to keep my faculties occupied, I could appreciate the various nuances in his speech—the way he often pauses for effect right in the middle of sentence; or the way he rolls his tongue over his words, tasting them and mulling them over before actually speaking. There is something very perceptibly heart breaking about it. Yet, it would never give itself away as the hopelessly tragic character that it breathes life into. In terms of an overused cliche, it is simultaneously stoic and a mirror into his soul. Right away, I knew I had my favourite English voice.

Almásy: Every night I cut out my heart. But in the morning it was full again. Our good friend has also been involved in several notable theatre productions, a majority of them being plays by William Shakespeare. I have a hunch that all the Shakespearean tragedies must have only honed his skills and/or whetted his appetite for playing the part of a doomed lover. Being an actor who is able to evoke feelings even before we can fathom what they mean, most of Fiennes’ characters (or should it be the other way round?) allow you to embrace the tragedy in their lives without smothering you with the numerous undercurrents. Not surprisingly, he is most at home when involved in a delicate balancing act between various facets of his personality.

Sure enough, we find that spark of eccentric genius in his eyes which bodes of disaster almost as often as it enchants and allures. And almost on an unconscious level, we can sense that the calm that pervades his life is the lull before the storm, when he will be throwing it all away for the sake of (cough) true love. It is quite possible that none of this makes sense to you. It is too darn difficult to translate feelings into words as it is. If that were not enough, here we are trying to decipher cryptic messages conveyed by so many nameless expressions. Good luck with that! That fact accepted, I can almost picture Fiennes playing the nameless narrator in a movie adaptation of Fyodor Dostoevsky’s White Nights and giving Joaquin Phoenix a run for his money (who, by the way, was not ordinary in Two Lovers by any stretch of imagination).

And was it his destined part
Only one moment in his life
To be close to your heart?
Or was he fated from the start
to live for just one fleeting instant,
within the purlieus of your heart.
—Ivan Tugenev

The wind and the darkness seemed to be engaged in a game of hide and seek last night. At times it was eerily silent and then suddenly you could hear it howling outside the windows, pushing and shoving itself against the trees, forcing them into mock submission. Such moments are almost always quite apt for a cautious dose of someone like Sam Mendes or Kieślowski. But you must tread carefully, mind you, for these are dangerous territories.

As I was going over my favourite scenes from The English Patient, I came to a formal conclusion that of all the actors who were a staple diet of the 1990s Hollywood romantic comedies/dramas (Hugh Grant, Patrick Dempsey, Colin Firth, George Clooney, and Richard Gere, to name a few), no one would have been able to carry off the role of Almásy with such finesse as Fiennes. The measured nonchalance with which he delivers those cryptic one-liners is, for lack of better words, too endearing. Although I still hold fast to my promise of never being consciously misled by the star cast of a movie, I would be lying through my teeth if I told you that I would not be willing to make an exception for this vicarious lover.

Too Many Steps Make My Knees Hurt