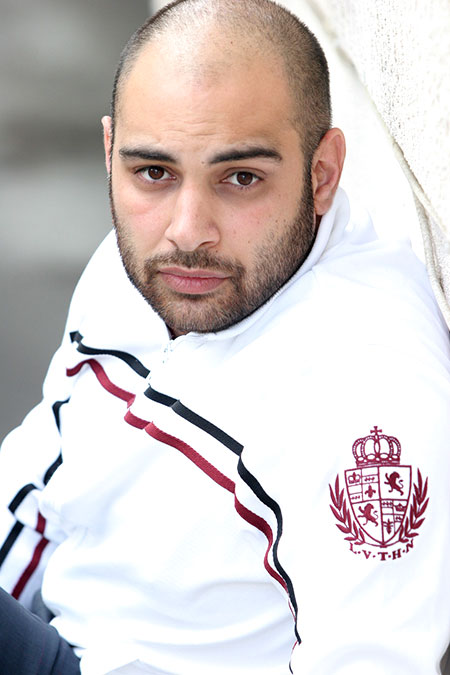 On Two Feet and Wings is Iranian-born lawyer, actor, and producer Abbas Kazerooni’s debut novel. As a young boy of 10, Abbas had to escape from Iran, following the ousting of the erstwhile Shah, to Istanbul where he had to learn to make his way around alone in a foreign country with no one to depend on but himself as he waited for his visa to England. Read on to find out what made him want to share his remarkable story of hope, survival, and growing up, and what sets this one apart from the rest.

Would you like to tell us a little bit about yourself?

Well, I am fairly easygoing but very ambitious at the same time. Once I get an idea into my head it is usually full steam ahead until I have achieved my goal—but I do tend to get tunnel vision! I am an attorney in California but also love to write and act—I went to drama school in London before attending law school. I am an eternal optimist and try to find an opportunity of positivity in every bad situation. Abbas Kazerooni: “I have always wanted to tell this story.”

What prompted you to tell your story in On Two Feet and Wings?

I [have] always wanted to tell this story—it is a story that is sad but ultimately gives hope [to the reader]. I believe that irrespective of your cultural and/or religious outlook, the reader can take something away from this story, mainly because it is a human story. I would like children to read this and realise that anything is possible if you try hard enough and fight for it. I also wanted to tell this story because I believe that it needed to be told. I was not the only one that endured such hardships, and I wanted to publish a book that represented the misery of so many people. Also the timing was right. My parents are no longer alive and therefore I would not feel guilty about what they would find out with the release of the book.

Do you think your parents made the right decision by trying to help you to escape to England by any means possible?

Well, technically my mother did not want me to leave, so it was ultimately my father’s decision. This is a question that I have struggled with for a long time. I choose to believe that it was the right decision because I believe that my father sincerely felt that this was the best thing for me at that time, under the circumstances. I would not wish to think of him or the situation differently because I am still here. To taint my father’s memory would be disrespectful considering what I have achieved in my life, and most of it would not have been possible had I not been sent away.

Your father was forced to make a choice that would be difficult for any parent—to either risk sending his son to war or to send him to a foreign country, leaving him to virtually fend for himself at the tender age of 10. Had you been in his shoes, what do you think you would have done?

Wow, that is a hard question. Now that I am older, I am not sure how severe the situation was. I am not 100 percent convinced that the situation was as dire as my father made it sound. But having said that, I was only a child at that time and I did not know (and still do not know) all the facts. But taking all the facts as being true as laid out by my father, I am still unsure that I could do that to my own child—there would have to be another way. With some hesitation, I would have to say that I would not send my own child to fend for himself.

According to you, how different would your life have been had you stayed back in Tehran?

It would have been wholly different. For a start I would probably not be able to speak English! If I was still alive I would probably have attended university in Iran and been in an artistic occupation, to the extent that the government would allow. I could see myself being a writer/actor in Iran. It is very difficult for me to imagine my life there as it has been so long since I had contact with Iran and how things are over there.

“I believe that we are built that way as humans. We do what we have to do to survive, and if it is not needed, those instincts do not kick in until they have to.”

In your story, you come across as a very precocious child. Do you think it was your circumstances which brought out that side of you?

I was always curious by nature from the time I can remember things. I was always fascinated by adult activities and that always helped me in having a better understanding of more mature material. Added to that I was fascinated by money as a child. Every penny was always accounted for and I always knew how much I had in each of my bank accounts, how much I had in my piggy bank and how much I still needed to reach my next milestone. But certainly, once I was put in the situation that I was put in, natural development and maturity was exponentially accelerated. I believe that we are built that way as humans. We do what we have to do to survive, and if it is not needed, those instincts do not kick in until they have to.

The likelihood of you obtaining a visa and reaching England was slim but yet you managed to do so. Do you attribute this to luck or destiny?

I put it down to both. I am sure that I would not have succeeded if I was not in the position that I was in. Though my age and circumstance was a terrible scenario, I know that inherently those very things were what made my luck. I always have said that my age, being my biggest weakness, was always my biggest strength, as it opened so many doors for me in Istanbul.

Though your stay in Istanbul wasn’t entirely untroubled, you encounter certain individuals who help you in some way or the other. Given the chance, what would you like to say to them?

Thank you! I would not be here today but for the generosity and goodness of so many people. I am not just talking about Mourat (one of the main characters in the book that helped in so many different ways) but also about the people that I only encountered on one occasion. My survival strategy in Istanbul completely relied on the existence of such people. I am so grateful to these people because they saw someone so vulnerable in such a dangerous place and they took it upon themselves to help me. I would tell them all how grateful I am to them as I would probably not be here now without them. How have your experiences as a young child forced to flee his home and make a life for himself in an alien country shaped the person you are today?

It has made me the person that I am today. It made me very independent and learn to rely on myself. It has taught me how to read people—I am very instinctive about people and I think that comes from my childhood experiences. On so many occasions, I had nothing to go on but my gut feelings. I cannot possibly list all of the things that my experiences have influenced in my character but I know that I was completely shaped by that experience.

In addition to being a writer, you are also an actor and a producer. Have you ever considered turning your book into a screenplay?

Yes, I have. I have already written the screenplay. I am waiting to see if anyone is interested in it!

How do you think Iran and Iranis are perceived by the rest of the world? What would you like to do to change that?

Unfortunately, Iranians have very bad press on the world media. There are certain reasons for that but I do not want to get into that as I do not have a political agenda. But I will say that Iranians can be some of the most generous and giving people on the planet. Iran has great history and art and has contributed tremendously to development of mankind throughout its history. Furthermore, as I said before, most Iranians are great, hard working, generous, and kind people. A small minority have created this terrible image that the rest of the world has of Iranians. I would like the rest of the world to see some of the positive things that Iran and Iranians have to offer. Iran and Iranians are by no means perfect—but they certainly do not deserve the [bad] press that they get.

Your book is bound to be compared to books like Not Without My Daughter and, more recently, The Kite Runner. What sets your book apart from the rest?

I think that these comparisons are inevitable, but the stories are all so very different. The protagonist in Not Without My Daughter is an adult and a more sophisticated individual. The comparison, of course, is [based on the fact] that they are both in a foreign country. I believe that she had a very different struggle from my struggles. In that novel, the protagonist knew what she had to do but she had the additional responsibility of her daughter. In contrast, in my book it is about a lost boy whose main challenge is trying to get through every day and working out what he has to do. In The Kite Runner, I feel that the protagonist is never really (literally) alone; he is only alone emotionally. In my story, I was alone physically and emotionally. I feel that The Kite Runner is more of a redemption story and mine is more a story of overcoming hardships and obstacles. Furthermore, in The Kite Runner, the redemption does not take place until adulthood. However, in my book, the protagonist overcomes his hurdles as a child. I believe that what sets my book apart is that the story is different and one about a child that is by himself in every aspect.

Through the Eyes of Another