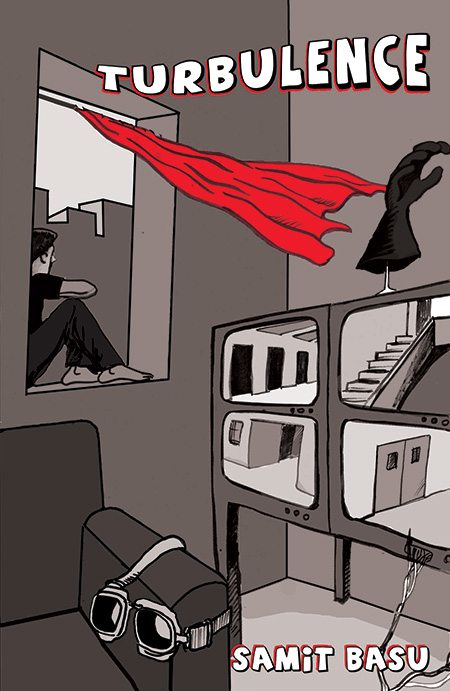 We never seem to get tired of superhero stuff. Let me remind you: Superman, the comic that started it all, was created as far back as 1932. Overwhelmed by its popularity, DC Comics and its rival Marvel started churning out superheroes by the dozen. Sorry, million. You know the names all too well. You’ve demanded sequels and prequels, spinoffs and origin stories. You’ve spent many guilty hours on the Internet lapping up fan fiction and expressing much appreciation for fan art. You’ve dressed up as your favourite superhero or supervillain at costume parties. You’ve seen every superhero film that was ever made. You’ve wished more than once that you could wake up in the morning and find that you could fly or read minds or breathe fire. You’ve actually been on the lookout for radioactive spiders. My point is—you can’t get enough of superhero stuff. Which is precisely why you will love Turbulence.

Of course, we know that Samit Basu is really good at what he does. We’ve already encountered his scintillating wit, his fantastic storytelling skills, and the panache with which he plays with allusions and references in the GameWorld trilogy. And for me at least, he was nothing short of a revolution in Indian literature. Don’t get me wrong—I think Indian writing in English is spectacular, but I’ve always found myself veering towards Western authors whenever I’ve wanted to read something, you know, fun. Being someone who’s immensely fond of S.F.F., I found it unfortunate that India didn’t have much of a speculative fiction scene. And then, along came Samit Basu.

I was a wee bit disappointed when I heard that Turbulence wasn’t going to be a fantasy novel. But I got over it the moment I reached the second page. You see, there are two ways to enter a story. You either climb down slowly into it or you plunge. In the case of Turbulence, you have no choice but to dive and instantly get entangled in the affairs of the characters you find yourself empathising with. We’ve all wanted to save the world at some point in our lives (wearing a cape or otherwise), haven’t we? And I’m sure there are a few nutty ones among you who dream of world domination too.

Basu said that he wanted to write about stuff that Indian writers generally write about. But because Samit Basu is Samit Basu, Turbulence (in his own words) turned out to be ‘a literary novel that was bitten in the arm by a radioactive spider’. (Dammit I wish I’d said that.) And it is precisely that. It’s time we stopped categorising novels into airtight genres. Moreover, Basu’s work doesn’t fit into any of the moulds that we know of. The story is set very much in the real world. So there’s no alternate history or dystopian future-type business. The real world, in any case, is crazier and more chaotic than the sinister, crime-infested, corruption-ridden Gotham City can ever hope to be. Somehow Basu brings us face-to-face with possibly all the issues that the world, and particularly, our country, is riddled with right now—global warming, religious political parties, underworld dons, cricket mania, poverty, terrorism—oh, you know, the list is endless.

So what happens when a few very ordinary individuals with very ordinary concerns who are fellow passengers on a British Airways flight from London to Bombay suddenly find themselves with extraordinary powers that are in some way related to their deepest desires, in our nice little horrid world? (Okay, I’ll answer that for you. Well. Some die, some emerge as superheroes, some turn into supervillains, and some are a little unsure about which side they’re on. But altogether they manage to make quite a mess of things.) Who decides what’s good and what’s bad for the world? And most importantly, why do you have to be really careful about you wish for? Turbulence answers all these questions, and very nicely too.

Book Review: The Goat, the Sofa, and Mr. Swami