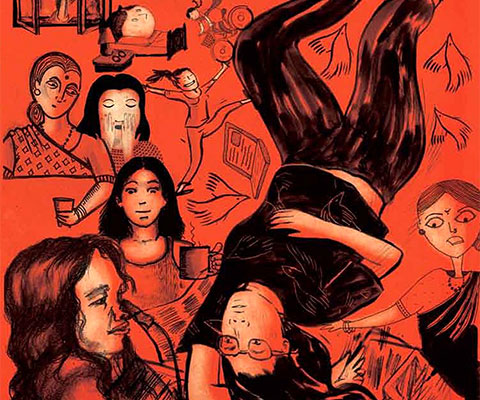 Once upon a time there was a prince who, while in exile, drew an indefinite line around his wife and called it the circle of trust and protection. On one side, were she and her loneliness, biding their time until the reason for her very existence returned. On the other, was all the wilderness that threatened to shred and destroy the flimsy fabric of her honour—which was really not hers at all. When she dared to break it, regardless of why, she paid the price: she walked through fire to prove her purity. And failed.

The story of Sita and the ‘violation’ of the Lakshman Rekha may have been a myth, but imaginary boundaries continue to live, breathe, and bind us in India in real and brutal ways. They’re everywhere: on trains and buses, in workplaces, on our news channels, on our beauty products, even in our own homes. All you have to do is be a woman to be able to spot the lines—the ones that close in on us, the ones that we etch in defence. Or flip through this smart, delightful collection of illustrated stories by Zubaan Books to read between them. Drawing the Line began as a graphic storytelling workshop helmed by the founders of the feminist German collective and magazine Spring, Larissa Bertonasco and Ludmilla Bartascht, and the Indian artist and animator Priya Kuriyan. Cultural contexts were shared, gasped at, and filed away for comparison with their own; new ways of seeing and telling were unearthed. The endgame: 14 visual narratives, told by young, urban women about urban women’s issues in India.

The collection opens with Harini Kannan’s fiery little tale about a baby who’s dealing with issues of skin colour even before the umbilical cord is cut. And closes with Samidha Gunjal’s cataclysmic story about a young girl who, fed up of all the male ‘attention’, metamorphoses into goddess Kali in a twist worthy of superhero films. En route, you find tales of loneliness and longing, as on Deepani Seth’s The Walk and Priyanka Kumar’s Ever After; sizzling with sarcasm, as on Soumya Menon’s (anti-) directional posters in An Ideal Girl, B.S.R.’s clever, caustic take on skin colour in Inner Beauty and Melanin, and Angela Ferrao’s problems gaining employment or financial security as a woman in Ladies Please Excuse; and pieces chronicling the ‘state of things’, as on Ita Mehrotra’s wonderful tribute to Irom Sharmila, and Vidyun Sabhaney’s Broken Lines, where she can no longer tell the difference between yesterday’s news about woman’s fingers being chopped off, and yesteryear’s norms of punishment.

You meet a ballsy school girl efficiently hunt down her predator in Neelima Aryan’s The Prey; a college girl who finds sisterhood in strangers in Diti Mistry’s Mumbai Local; a wise Bena in Reshu Singh’s The Photo, who knows she’s so much more than the coy image she’s presenting to the world in her wedding website photos; and Asha, who continues to live with the trauma of being molested as a child in Hemavaty Guha’s story.

And then there’s Kaveri Gopalakrishnan’s six-chapter ode to a better future: one where we might not have to wear imaginary giant garbage bags before we step out of the house to feel safe, or scowl perpetually so they’ll know this is hands-off territory; where deciding whether to play Holi with strangers wouldn’t be a matter of life and death; and you could scratch yourself in public without being shamefaced. Or, one where we could erase away our own infinite lines and just… be.

There are, naturally, as many illustration styles—from cartoons to the folk art of patachitra, the instructional poster to the fantasy novel—as there are stories. Although it is varied, the art in this book takes a back seat to the content. The hero here is the everywoman and her contained, quiet rage against the system: The baby who says “I’m coming out, bitches!”; Jenny Pinto who half-mockingly dreams of becoming a C.E.O. despite job interviews that sound like matrimonial meetings; married women ready to fly off windowsills and cross bridges to a more adventurous existence; and everyone else mustering up the courage to step outside lines.

They’re angry Indian goddesses, alright; the Sitas who’ve dared to wander deeper into the wilderness. But these authors’ weapons in the 21st century aren’t violent displays of protest or obvious acts of rebellion. They are ink and paper and cleverly told stories. If there is an agenda here, it is to document this particular sliver of time and its zeitgeist. So, bra-burning is swapped for bra-binning at work, and you’re made to think of Irom Sharmila not as a political figure on hunger strike for nearly 15 years, but as a woman who might also want to participate in her expanding universe; and it’s a time when mothers and daughters don’t often find themselves on the same side.

At some point while reading the book, with all its odd familiarity and ensuing melancholy, you’ll begin to feel a certain rumbling in your heart. You’ll wonder about how far we’ve come, and the thresholds left to cross over still. And that gestating discontent is the biggest triumph of this book.