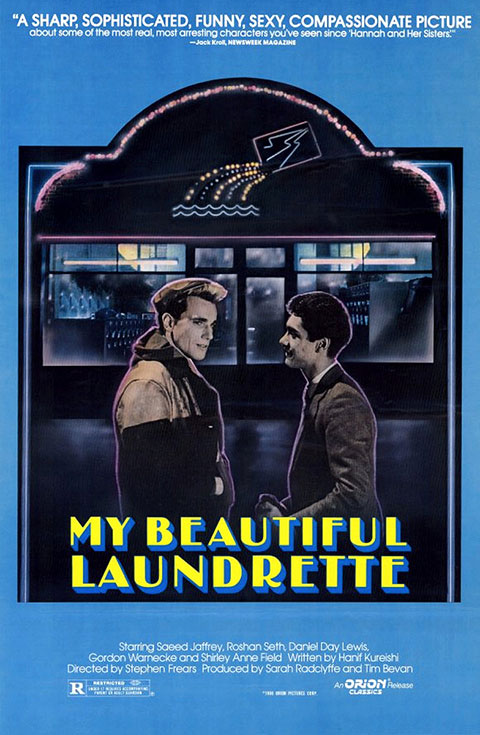 It was odd because while on the one hand, the liberals in British society were realising that their government’s attitude towards immigrants of colour didn’t reflect the principles they held so dear, while on the other hand, British institutions still continued to practise racial exclusion, and the British media freely vilified, mocked, and exoticised the country’s racial minorities. Above everything else, it was an odd time because Margaret Thatcher, with her inimitable brand of socially exclusionary but economically inclusive racism was Prime Minister, while Labour Party superstar Ken Livingstone was the chief of the Greater London Council (a position later equivalent to the Mayor of London). Britain was one great pushmi-pullyu of clashing ethnic and political forces, a country that was just starting to come to terms with its now famous policies of multiculturalism. One of the things that emerged as a result was that public funding was made available to filmmakers and video artists from the minorities. Writers, filmmakers, and artists from the African, Caribbean, and Asian communities living in Britain took this opportunity to make films with authentic representations of their experience as immigrants, going beyond the typical, mainstream British portrayal of the black gangster or the exotic brown-skinned woman. Some of Britain’s most vibrant and complex films are from this time. And while a lot of them sacrifice aesthetic pleasure or entertainment value for political edification, if you watch enough of these, every once in a while you will find a film that manages to present the entirety of a particular immigrant community’s experience of life in Britain, with the kind of intelligence and insight that can make you laugh, but also leave you in awe.

My Beautiful Laundrette is one such film. Originally written for the stage by British-Pakistani writer Hanif Kureishi (Buddha of Suburbia, The Black Album), and directed by Stephen Frears (High Fidelity, Dirty Pretty Things), Laundrette was produced as a television movie that eventually got a worldwide theatrical release (and an Academy Award nomination for Hanif Kureishi for Best Screenplay). It is the story of Nasser and Papa, brothers who immigrated to Britain from Pakistan/India before the Partition. Papa, an intellectual who worked in Bombay before moving to Britain and marrying a white woman, leads a life of the mind. His ideas are lofty, his principles firm, and the only dream he harbours is for his son, Omar, to go to University to study literature or the arts. His younger brother Nasser, in contrast, seems to have packed up his whole life in Pakistan and shipped it along with him to London: he brings his wife, he brings friends, he brings relatives, and he brings his business. For him, life in Britain isn’t about ethics, principles, or the intellect. It is about survival. It is about making money. It is, as he puts it eloquently, about “squeezing the tits of the system”.

In an attempt to set Omar up — “only till he goes to college” — Papa gets Nasser to give the teenaged boy some menial work at one of his various business enterprises. Nasser, impressed by his nephew’s potential, hands over the reins of a failing laundromat to him. This establishment, with its decrepit washing machines, its crowd of often non-paying customers, and its location near the industrial detritus of south London, is the titular laundrette. This is the locus of the film, the site around which the various storylines play out. In order to lock the business into the family, Nasser sets Omar up with his daughter, Tanya. Omar, however, is in love with his childhood friend Johnny, a former neo-Nazi, and he recruits him to help run the laundrette. Omar and Johnny expand the laundrette business by stealing money from Nasser’s business associate, while Nasser’s white British mistress takes a serious interest in the betterment of Omar and Johnny. Each of these tightly wound threads sets the plot up for a dramatic resolution, and not one of the ninety minutes of this film disappoints.

The brilliance of the film lies in the flesh, the muscle, the teeth that Kureishi’s writing gives it.

And yet, the plot isn’t why you should watch the film, because the plot is just the skeleton. The brilliance of the film lies in the flesh, the muscle, the teeth that Kureishi’s writing gives it. His grasp on the South Asian immigrant experience in Britain is evident in the way that every main character, while a rounded character in her/himself, is also an allegorical figure in the overarching immigrant narrative. Papa, in his personal and professional failures, typifies the Nehruvian intellectual of postcolonial India/Pakistan, whose erudition served him well during the colonial era, but has since become irrelevant. Nasser, on the other hand, belongs to the breed of south Asian businessmen who settled in Britain soon after 1947, bringing with them the kind of capital that compelled Conservatives like Margaret Thatcher to look to them for boosting Britain’s economy. Omar, the next generation of this family of businessmen and intellectuals, is caught between these two worlds. He has the opportunity to flourish economically, but he cannot forget the racism that broke his father’s heart. He knows he will be a powerful man some day, owning “an armada of laundrettes,” but he will always be an outsider in British society. He loves Johnny, and he needs him for his business, but he can’t get over how this white boy, in his days as a neo-Nazi, had attacked his family. As per his uncle’s sage advice, Omar is poised perfectly to squeeze the system for all its worth, but he doesn’t know if it will ever be enough.

It is in these characters — their relationships with one another, as well as their relationship with the state — that the multi-layered experience of postcolonial immigrants in Britain starts to reveal itself. Of course, you don’t have to tune yourself into the socio-political nuances of the narrative to be entertained: in the characters, in the moments of suspense, and in the fraught-sexy-poignant relationship between the two boys, there is enough to enjoy and love. But if you are the kind of person who likes to chew on history, who loves ruminating on the political minutiae of societies, Laundrette will certainly give that that extra bit of satisfaction.

And it’s a funny film too, without any of the easy shots at immigrant humour you might find in, say, a Gurinder Chadha movie. There are no tired jokes here about how white people stew in their own dirt in a bathtub, instead of using a bucket and a mug*. There are no embarrassing grandmothers who loudly deride white girls for wearing miniskirts. For Kureishi, humour, too, is a political tool. But he uses it brilliantly, and is aided by actors who slip naturally into their roles. Saeed Jaffrey (who, in the words of Salman Rushdie, has made something of a cottage industry of playing the south Asian immigrant in Britain) as Nasser, has some of the wittiest one-liners in the film, including this, my favourite: “I’m a professional businessman, not a professional Pakistani.” Lines like this make the film hilarious and insightful at the same time.

At the end of my lustful paean to this film, however, I would be remiss if I didn’t mention that the film — for reasons of technology and budget — may not look up to par. The scenes are played out perfectly, almost every frame composed with care and beauty. But Laundrette was made in 1984, and for television. The producers were working with a very low budget, and it was shot entirely on video. Considering we’re now used to technology that allows us to distinguish an actor’s lipliner from their lipstick, or a level of high-definition that has practically destroyed C.G. effects, the visual quality of Laundrette may be jarring. But if you can get over that, you might just love what you see.

* Paraphrased from Metin Hüseyin and Meera Syal’s Anita and Me (2002).